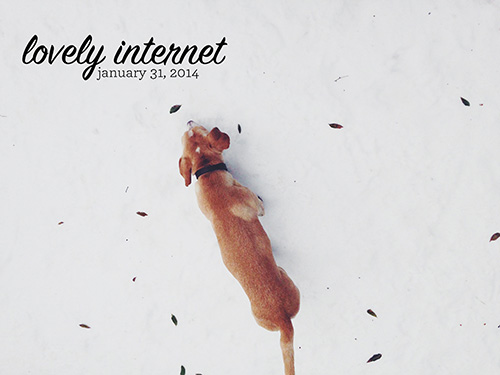 1. The Gentrification of Collards. I’ll admit I had a chuckle when I saw that poster, but this article makes an interesting point of why collards being the next “it” green may not be such a great thing for the people who traditionally eat them.

3. As someone with loads of irrational fears, I know what it feels like to think these sorts of things.

4. A thoughtful piece from Grace of Design Sponge on the State of the Blog Union.

8. “Schools in the South close at the mere hint of snow not because the people who live there are wimps, but because snow is such a rare event—and most cities there don’t have a fleet of snow plows the way Northern ones do.”

10. My Aunt Diane (who is completely convinced Dan & I are hipsters) sent me this, which is hilarious. Will you be heading to McDonalds for your morning jolt?