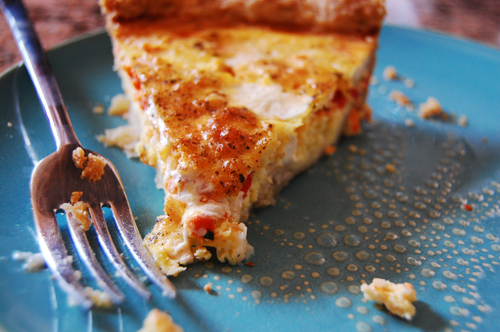 My mother will quite literally laugh out loud when she reads this, but I wouldn’t consider myself a messy person.  Okay, so not only my mother will make fun of that statement.  But, having known truly messy people over the years (and lived with them), I would say that I keep it clean…ish.  Dan isn’t particularly messy either, though he is a pack rat of the highest order.  I usually feel like our apartment is decent.  If we were to unexpectedly die with no time to clean, I wouldn’t be too embarrassed about my mother finding it in it’s typical state.  I mean, unless she checked the baseboards, which really only get dusted when she comes to visit (because she checks while I’m sleeping.  Remind me another time to tell you what she did to my college apartment the week after my tonsillectomy). 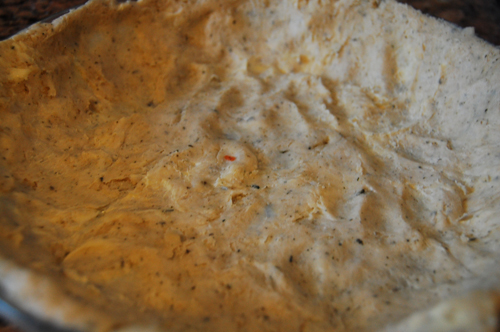 This weekend Dan and I finally faced the reality that was our hall closet, a closet unusually big for a metro-area apartment.  When we moved in it was all organized by a system, but in the past year it has gotten… well, out of control.  It could be the camping gear or perhaps the old television that Dan isn’t quite ready to get rid of yet, but it’s packed floor to ceiling with crap all the way up to the door.  A problem, you could say. 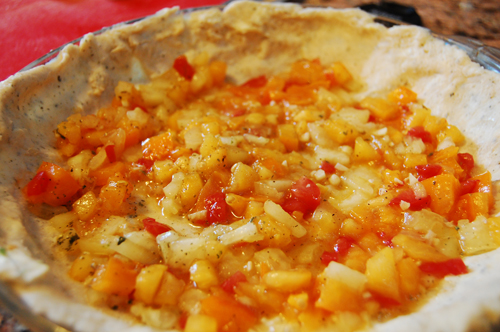 Since all of our day Saturday was going to be consumed with the frustrating chore of cleaning out the worlds most crowded closet, I thought ahead and made a quiche.  Ever since I saw the movie Waitress (we’re big Nathan Fillion fans) I’ve spent my free time making up pies in my head, as Keri Russell’s character was apt to do.  So, on my way home from work on Wednesday, while trying to figure out what to do with the heirloom tomatoes leftover from a pesto tart and the smoked mozzarella I had bought but wasn’t going to use before it went bad, I thought up the perfect quiche. 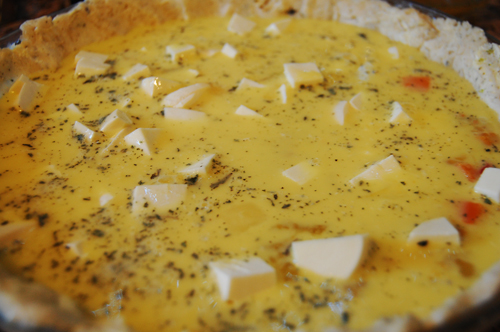 And it was perfect.  I made it Wednesday night while the ingredients were already out, baked it, and froze it.  On Saturday, after hours of trying to make sense of how much crap we’ve accumulated in one short year, we sat down, watched an episode of Firefly, and enjoyed a quiche that was smoky and juicy, light and full of flavor.  With a gin and tonic, of course. 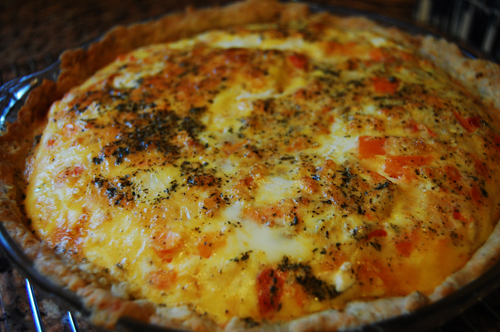 Put your dough into the pie dish.  Toss tomatoes with half of the salt, pepper, and basil.  Spread into the dough.

Whisk together egg, milk, parmesan, and the remaining seasoning.  Pour over other ingredients in the crust.

Bake at 350 for 50 minutes or until cooked through.