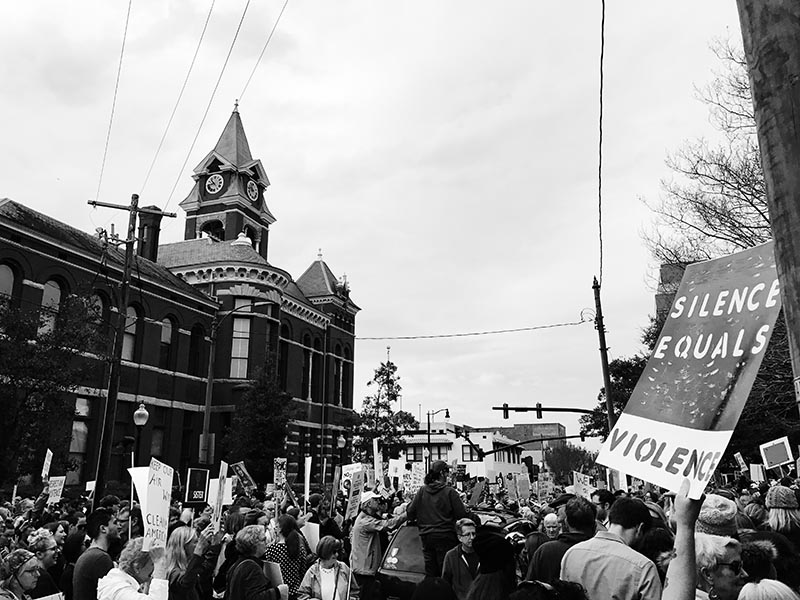 Those that regularly follow this space may have noticed that it’s been unusually silent lately. In fact, I haven’t posted anything since early November. I’ve made plenty of things (in fact, I wrote a cookbook), but I haven’t known what to write. Since the election I’ve had my fair share of opinions, mostly incredulous and angry, but this didn’t seem like the appropriate outlet for that (thanks, twitter). I knew I couldn’t turn around and come here to talk about Thanksgiving recipes like everything was fine so I just… didn’t. And every time I started to write something here, I came up blank. I eventually realized that I wouldn’t be able to go on with blogging as normal until I addressed the situation head on.

So here it is. This is a scary, disappointing, and frustrating time to be an American and a Southerner. We have given control of the country to an unhinged man who every day proves to be completely unfit. We have elected a congress that is prepared to wage war on women, people of color, low income Americans, and the environment. We allowed racism and sexism to get in the way of progress, and now we have to sit back and watch as our democracy is attacked in the name of lining the pockets of the super wealthy. I was hoping for something different when we voted in November, and I am having a hard time reconciling the choices made by my fellow (white) Americans.

Saturday I joined the Wilmington Women’s March to protest the inauguration and this administration’s attack on women, people of color, the LGBTQ community, the environment, health care, public schools (and on and on and on). I was so overwhelmingly proud of my community for the crowd of over 1200 people (women, men, children). I was even more inspired to see massive protests around the world, and it gave me a slice of hope to hear people committing to resist today and going forward. I’ve been calling my congressional representatives and senators, sending postcards, and I’ve resolved to join as many protests and marches as I can going forward. If nothing else this election has inspired me (and so many) to be more politically engaged, and I’m inspired watching Americans come together to stand up for what we want our country to be.

I’m planning on coming back to this space more frequently with recipes, including a recipe that has been neglected in my drafts folder since October as I processed all of this. I believe in this country, and I am hopeful that we can make this a country that serves all of its citizens equally and fairly.