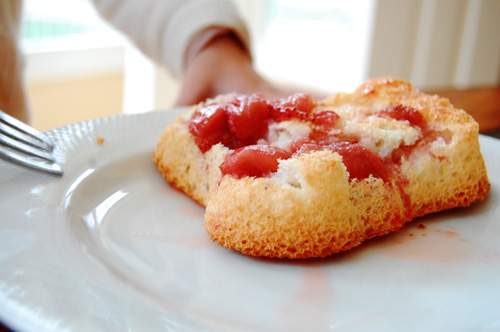 One of my favorite desserts since childhood has been angel food cake.  When I was a kid my mother would serve it to us shaped like a bowl with fresh strawberries and whipped cream.  I’ll admit I also love it smothered in strawberry sauce.  It’s just so light and fluffy and the barely sweet cake mixed with the sweet strawberries is such a heavenly combination.  No wonder they call it angel food cake. 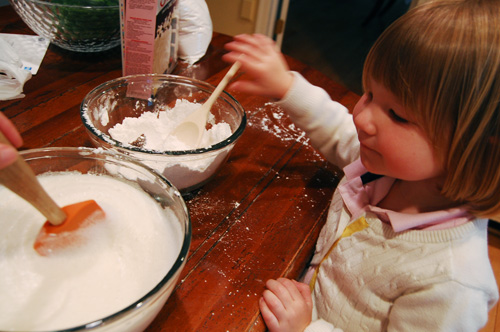 For her third birthday Marin got a selection of silicon baking pans in different novelty shapes.  So, to break them in, we made angel food cake.  I also made a larger one in a small bundt pan.  To top it off, we made our own strawberry sauce, which was so yummy.  The only hard part about making this recipe with kids is that there is a big cooling off process, especially for the sauce, which needs at least an hour in the fridge to really become syrupy.  The cakes also need to cool in the pan for about an hour before they’re solid enough for you to get them out of the bakeware. 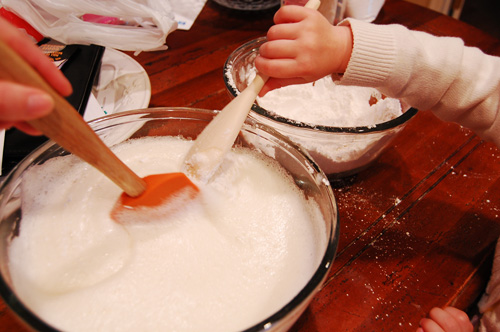 The recipe is surprisingly easy to make.  Angel food cake is made up primarily of egg whites and sugar, which is why it’s so spongey and light.  It’s a lot of whipping, and if you aren’t trying to impress a three year old with a hand mixer you can do it all in a stand mixer pretty quickly.  You do have to move quickly though, because you want to get the batter in the oven while it is still stiff, otherwise it gets gooey, which is not the texture you want. 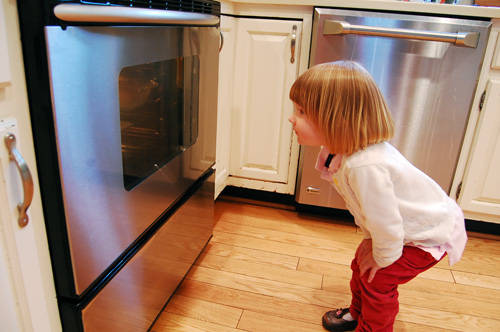 The strawberry sauce is also a breeze to make.  If you’ve ever made simple syrup, that is your starting point.  Though, because strawberries are naturally sweet I make the sauce using two parts water and one part sugar, then I add in some strawberry jam later to thicken it.  Don’t worry if it doesn’t seem thick enough as you’re making it, cooling it down will really add thickness.  If the little one you’re cooking with doesn’t like strawberries (or you don’t), angel food cake is also delicious with hot chocolate sauce drizzled over it.  Yet another alternative is to drizzle melted honey over your chopped strawberries.  This will make a very thick syrup, but it’s all natural and totally delicious. 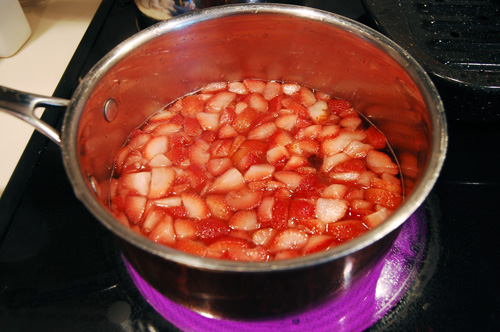 Sift together the flour, salt, and half the sugar.  If you were unable to find superfine sugar at the grocery store, it’s no big deal.  Just spin it in the food processor first.  Set this mixture aside.

Crack your twelve eggs and discard (or save for something else) the egg yolks, keeping the whites.  Use a hand whisk to incorporate your cream of tartar and your extract.  Whisk with your hand for a minute or two, then switch to the electric mixer with the whisk attachment.  Beat for about five minutes, or until the eggs have gotten really foamy and pretty stiff.

Add in the other half of the sugar just a little at a time.  Remember, you want this mixture to be really stiff, so keep beating until all the sugar is incorporated and it can hold a nice peak.  Then, using a rubber spatula, slowly add the flour mixture in.

When the flour is completely incorporated, pour (gently) into a bundt pan.  Bake at 350 for 35 minutes.

Let cool one hour in the pan before you serve it.