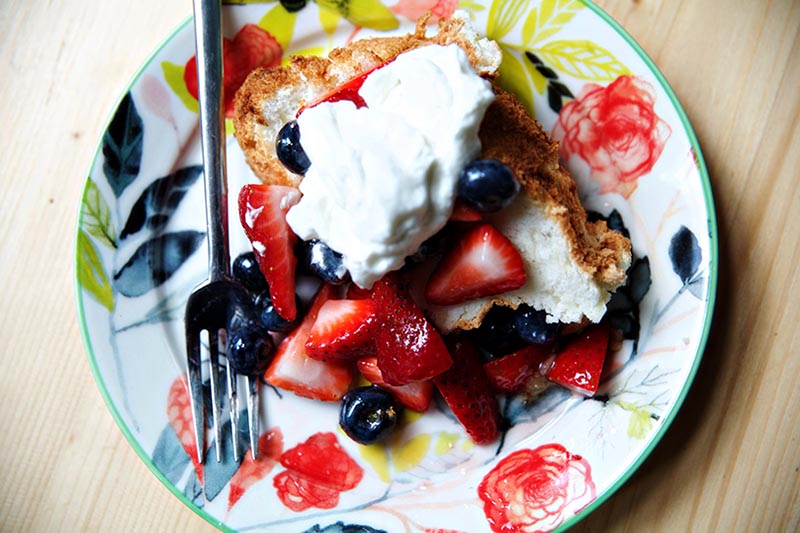 To be totally honest, this cake was a comedy of errors. If it hadn’t been for a pure and intense craving for angel food cake, I would have thrown the towel in half way through baking it. Everything was going smoothly as I added the flour to the egg whites, but when I poured the batter into the baking dish I noticed all the flour was clumped at the bottom. So I pulled it out and remixed it, and then put it back into the baking dish. 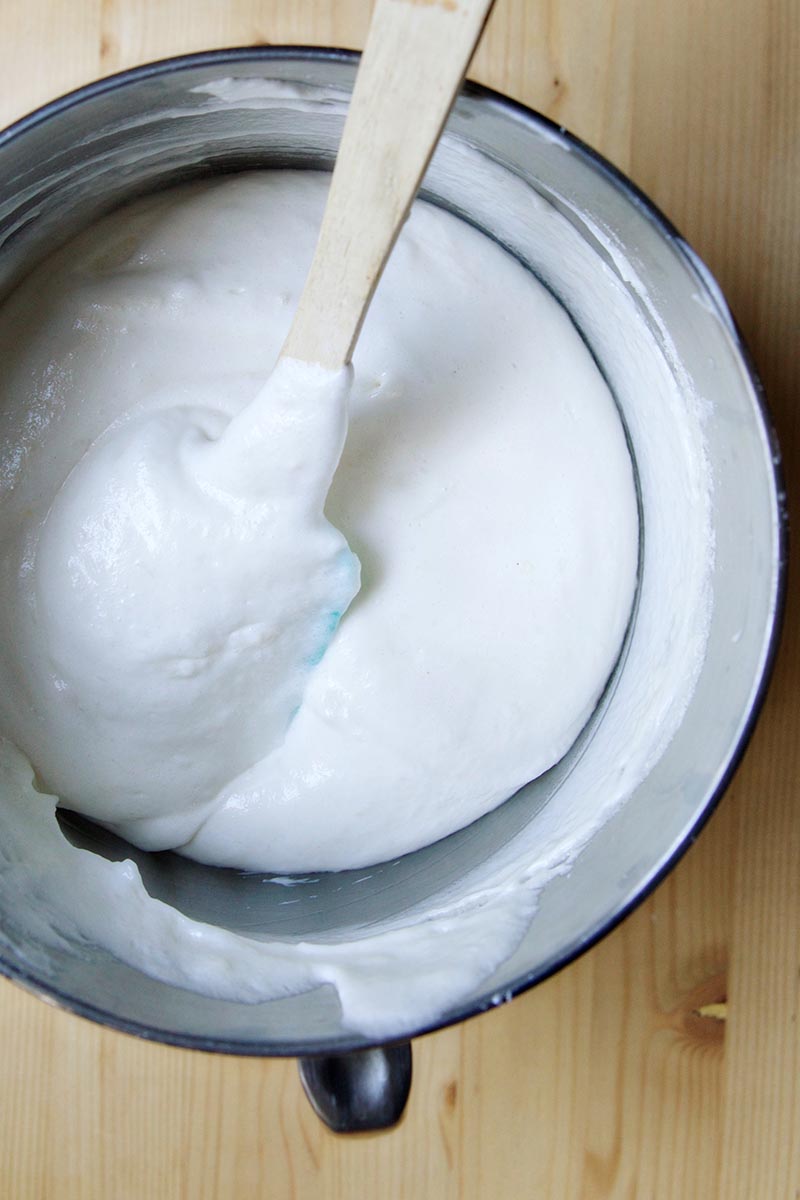 Fifteen minutes after I put the cake in the oven I smelled burning, so I checked and realized that I had grossly underestimated the necessary pan size for the amount of batter I had, so it was bubbling up and overflowing a bit, dripping onto the bottom of the oven. There wasn’t really much I could do, so I let the cake finish baking and after it was out of the oven I began the dirty work of scraping the cake out of the pan. I think because I’d taken the batter out to finish mixing and put it back it stuck to the pan something awful, and then the edges sealed when it bubbled up and over. It was kind of a mess, but frankly I ate what I pulled off of the cake as I was working it out of the pan, so at least it was delicious work. 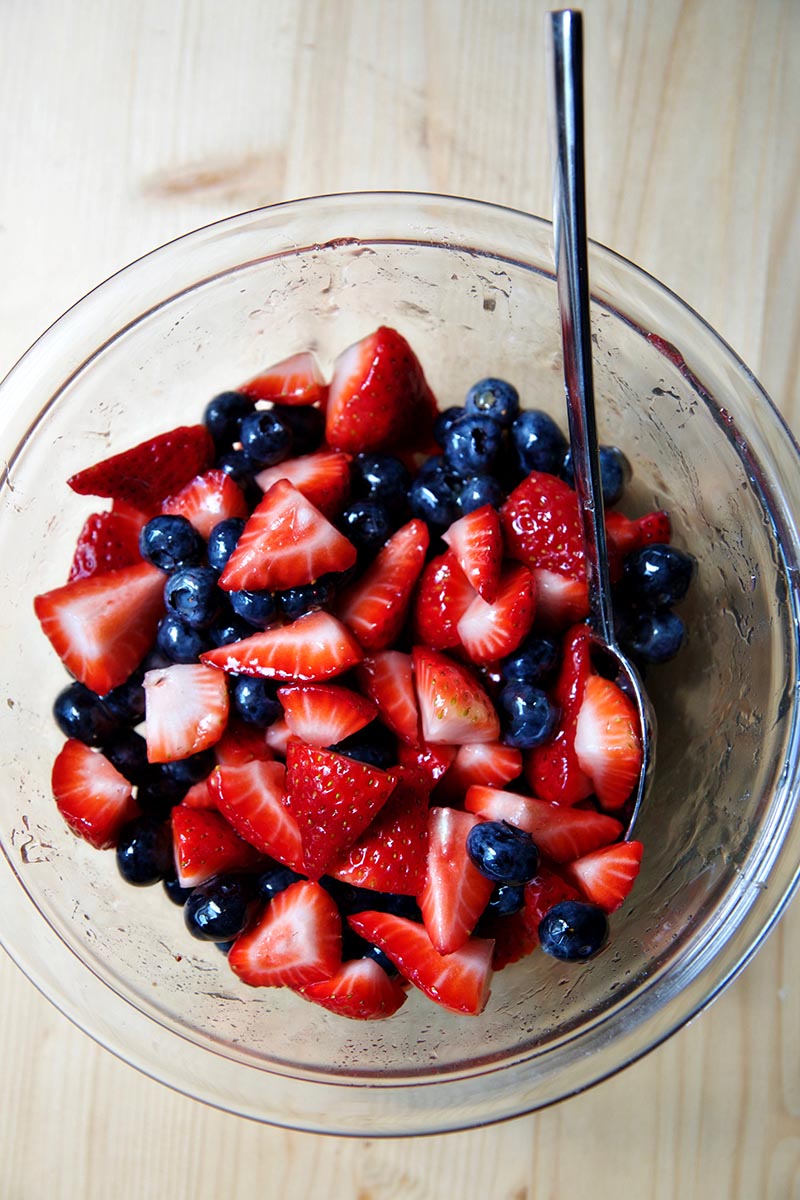 I know that the general theme in the past few posts has been “me coping with having celiacs” but that’s pretty much where I am right now, so I hope you don’t mind coming along for the ride. It’s actually been a bit of a blessing in this pregnancy, because I haven’t been able to just fold and give in to all the cravings (like spicy chicken sandwiches and all the donuts), I’ve had to come up with homemade alternatives that I can have. So when I saw angel food cakes in the bakery and realized I needed to have one as soon as possible (and the craving stayed for a week), I made it happen. And it was fantastic. 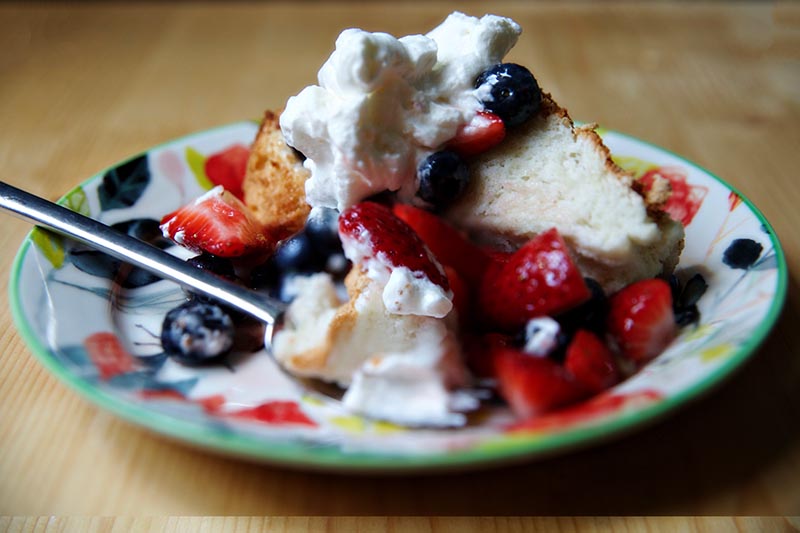 Angel food cake has long been one of my favorite desserts, practically perfect for Spring. And I know it’s not quite Spring, but the grocery had local winter berries and it’s going to be almost 90 degrees this week in Wilmington, so forgive me for indulging a little early. Traditional angel food cake is light, airy, and spongey. With gluten free flour, this was no different. It was absolutely perfect, and completely hit the spot.

Preheat your oven to 350F. Sift together flour, salt, and half of the sugar. Set aside.

In the mixer (or in a large bowl) combine egg white and cream of tartar. Beat for a minute on slow, until frothy. Add in the vanilla and beat for 5 minutes or until the egg whites are whipped and stiff. Add in the remaining sugar, a little at a time.

Turn off your mixer and, using a rubber spatula to fold, add the dry ingredients a little at a time. Mix well and make sure you get all the flour mix well incorporated! Transfer into an ungreased 10″ angel food cake/tube pan.

Bake for 40-45 minutes or until golden brown. Invert onto a rack and allow to cool fully, about two hours, before removing the pan.

While your pan is cooling, chop your strawberries and mix with blueberries and honey. Set aside to allow the juices to blend. Whip together cream, sugar, and vanilla. Beat until stiff and chill.

Serve cake sliced with berries and whipped cream. And enjoy!

This recipe was really easy to adapt! Just: