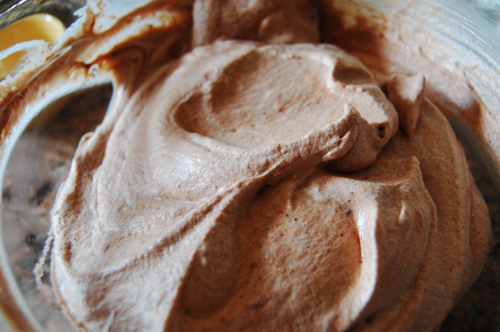 This year, because of an impending wedding, my father’s new dive charter, and the fact that all of my siblings are either in school, employed by AmeriCorps, or in the Army, we are not exchanging Christmas gifts.  Which is great, I was only asked to bring home pie, which is why this week I made seventy odd holiday cup pies. 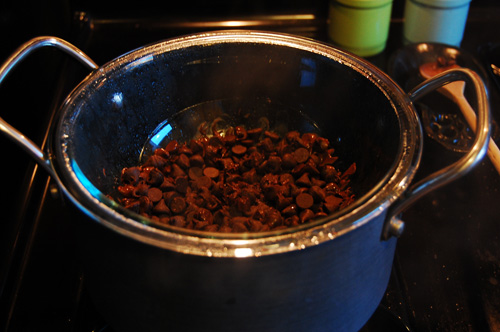 So, as a result, Dan and I celebrated our Christmas a bit early, on the 22nd.  Which was a great idea.  I was going to make chicken marsala, spinach tossed in olive oil and garlic, and for dessert, a lovely mousse.  Now, I know you probably think I’m a crazy masochist for making a mousse after what I will probably refer to in the future as the Pie Blitz of 2008, but what is a romantic Christmas without dessert?  Well, it turns out, I am a masochist and a giant clutz.  After I melted the chocolate on the makeshift double boiler, I went to remove it from heat, and sloshed water all over my hand.  Which left me with serious burns and an inability to do anything but whine.  So, I finished off the mousse and watched Gilmore Girls until Dan got home, and HE made the chicken marsala.  I stayed on the couch and watched Gilmore Girls.  Romantic, right? 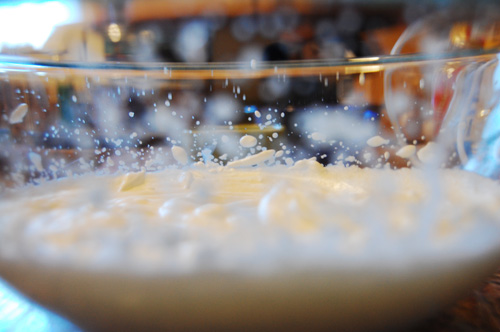 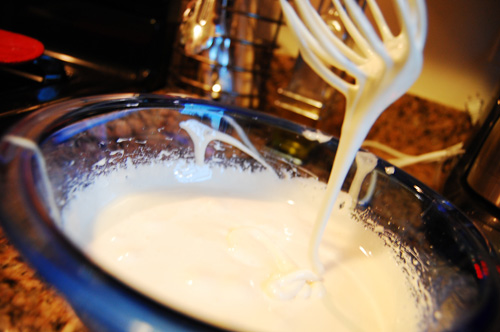 Heat chocolate in a bowl over a saucepan of boiling water.  You don’t want the bottom of the bowl to be making direct contact with the water.  The water should also be slowly boiling, not rapidly.  Stir the chocolate occasionally until it’s melted and smooth.  Remove chocolate from heat, but keep the water simmering.

Whip cream until it holds soft peaks.  Cover and refrigerate.

Whisk egg yolks, egg, salt, and sugar together until foamy and light.  Place over saucepan and whip with electric beater.  Move the whisk in a circular motion until the eggs are fluffy and hot to the touch.  Don’t keep it over heat too long, or your eggs will scramble.  Remove from heat and continue beating on high for five minutes until thick ribbons fall from the beater when lifted.  Whisk in water.

Fold 1/4 of the egg into the chocolate.  Incorporate completely, then fold in the rest.  Finally, fold in the cream to make it smooth and light.  Pour into serving dishes, cover, and refrigerate at least one hour.