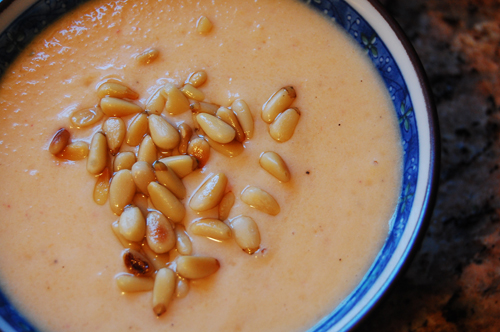 When Dan and I first started dating, after three years of friendship, I was in my last semester at the Maryland Institute College of Art.  Dan had already graduated, and since he was in Philadelphia much of our first few months together were long distance.  For those of you who have ever been in long distance relationships, you’ll understand that the majority of your time is spent on the phone, reading emails, writing emails, ichatting, video chatting, and of course, sending handmade letterpressed cards to each other.  Okay, that last one might be a geeky art school thing. 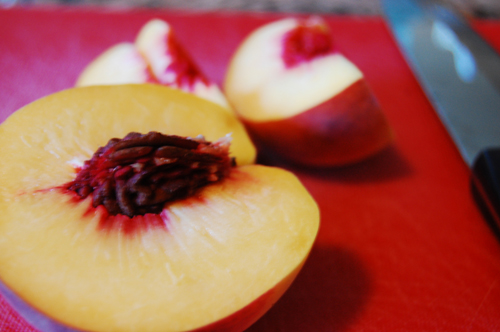 My point is that when you’re spending hours of the day talking to another person (because at the beginning of a relationship you can literally talk for hours), you have to scramble to come up with new and interesting things to talk about.  Shortly after we started dating Dan and I started playing a story telling game.  Essentially, we would tell each other little made up stories about our hypothetical future.  The stories were serious and whimsical, funny and emotional.  I think it started as a way to admit to one another that our intentions were genuine, and it became an easy outlet to talk about hot button relationship issues like marriage, kids, and whether or not to get a dog.  Dan will ultimately win that last one. 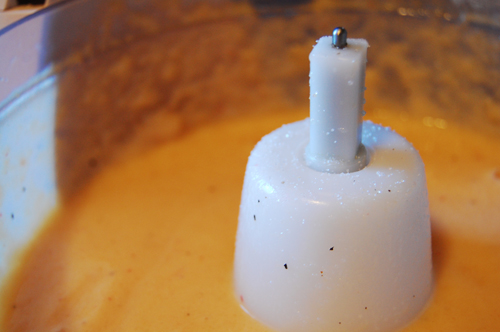 It’s been a long time since those long distance days, and a lot of our stories have come true.  However, since we’re still urban apartment dwellers, the one big dream of ours that has yet to be realized is a garden.  And let me tell you do we have big garden plans. Our first apartment in D.C. didn’t have air conditioning, and when we moved in our potted herbs took up most of the dining room.  And they flourished!  Unfortunately, that apartment was satan’s playground (read: bedbugs) and we were moved out by early fall.  Our current apartment also has good light, in addition to heat/air conditioning units.  Once again our plants were happy, as they spent the winter sitting on top of the heater.  To them, it was as good as summer.  And then real summer came.  And with it came the harsh realization that the only windows were also where the air conditioner sat.  All of our beautiful, delicious, fabulous herbs and vegetable plants suffered as D.C. got hotter and our apartment got colder. 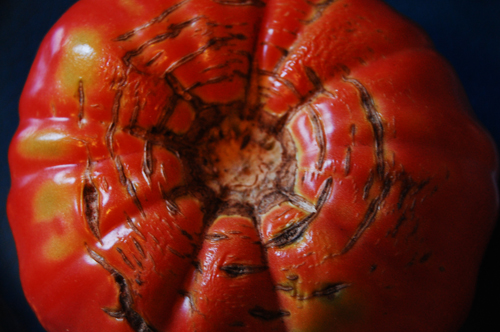 Fortunately I was able to steal one of our baby tomato plants away from our chilly apartment and plant it in full sun at work.  Dan harvested the seeds from a farmer’s market heirloom tomato last summer and this week we got to eat the first fruit of our labor.  Because so much went into the creation of this tomato and because we are experiencing so much angst about our dead indoor garden, we wanted the full flavor experience.  That meant not cooking it, but eating it raw- in all of it’s juicy heirloom glory.  A few weeks ago we had dinner at my brother & sister in-law (to be)’s house, and they served us prosciutto, mozzarella, and tomato sandwiches with peach soup.  It was so good that we decided to copy it. 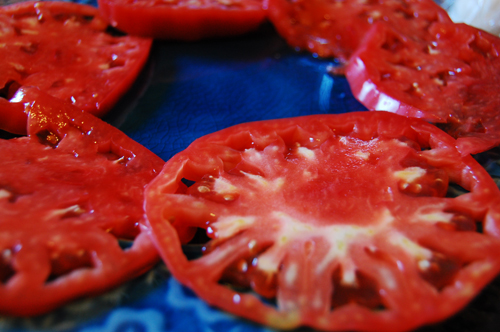 The Turcottes are aficionados of the fruit gazpacho.  They told us that this soup, the peach soup, was mostly  just peaches, yogurt, and some almond extract.  So that’s basically what I did.  Instead of toasted slivered almonds (which I forgot to get), I topped the soup with toasted pine nuts, and I think it turned out almost as well as theirs.  It was a great compliment to the main attraction- the bacon, avocado, mozzarella, and tomato sandwich.  One of the best tomatoes I’ve ever had.  Made even better by the fact that we made that tomato.  WE MADE IT.  (If at this point you’re going “that post was not even kind of about peach soup” please just let it go.  Because I’m still sick and it’s impacting my ability to do anything but whine and watch Top Chef.) 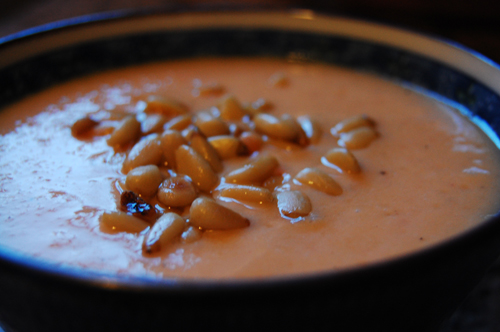 Peel and dice your peaches.  Blend them in a food processor until smooth.  Add in extract, yogurt, and salt & pepper.  Blend again.  Chill in refrigerator 1 hour.  Toast nuts and sprinkle over soup. 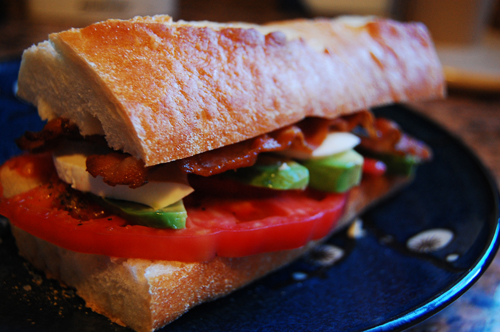