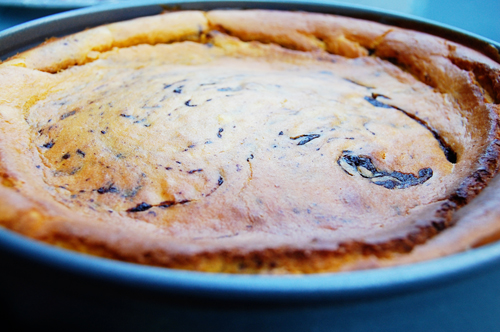 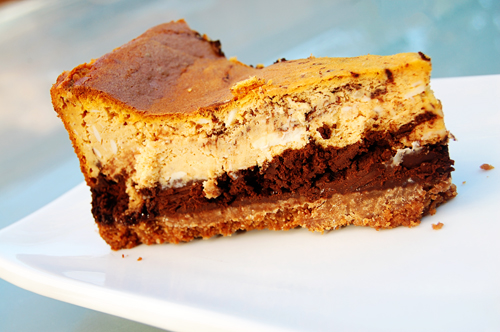 Not long ago (i.e. january 17, 2010) I made my first cheesecake.  And I was nervous.  Very nervous.  I was convinced it was going to be horrible, that I would do everything wrong, that the world would mock me.  Instead, it was delicious and nobody mocked me at all.  Well, Dan probably mocked me for being nervous.  The point is, once I successfully made a cheesecake without anyone dying, I was no longer nervous.  I was more willing to experiment, to try things that will probably fail.  And experiment I have.  Which brings us to the final Thanksgiving 2010 recipe.  High off of my past cheesecake successes I tried my hand at a pumpkin swirl cheesecake.  I was mildly successful at the swirl part, but the chocolate/pumpkin combination was delicious.

For more recipes to get you through this holiday season, visit our Guide to Holiday Eating.  Finally, here is a sneak peek at some of the changes to come in the Biscuits & Such redesign.  We’d love to hear your feedback! 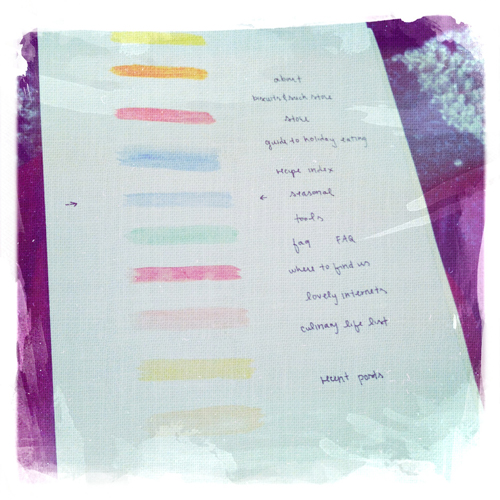 Start with the crust.  Combine graham crackers and spices in a food processor.  Blend until crumb.  Mix in melted butter.  Rub springform pan down with butter.  Press graham cracker mix into the bottom of the springform pan.  Bake at 350 for 10 minutes. Set aside and let cool.

Next, make your ganache.  Melt chocolate in a double boiler.  Whisk in heavy cream.  Pour 5/8 into the springform pan.  Set aside the rest.

Cream cheese in a mixer on medium.  Add butter.  Add in sugar and pumpkin.  Add spices.  Add eggs, one at a time.

Heat your oven to 350 and boil a teapot of water. Wrap bottom of springform pan in tin foil to prevent leaks.

Spoon cheese mixture into springform pan.  Using a the handle of a wooden spoon, swirl together chocolate and pumpkin.  Add in extra chocolate, in small amounts, to create swirl.

Place the pan in a larger roasting pan. When the water is boiling, pour around the springform into the roasting pan, surrounding the cheesecake with 2 inches of water.

Bake at 350 for 1 hour & 5 minutes (65 minutes). Take out while the center is still soft, it will set later. Let cool and chill overnight.