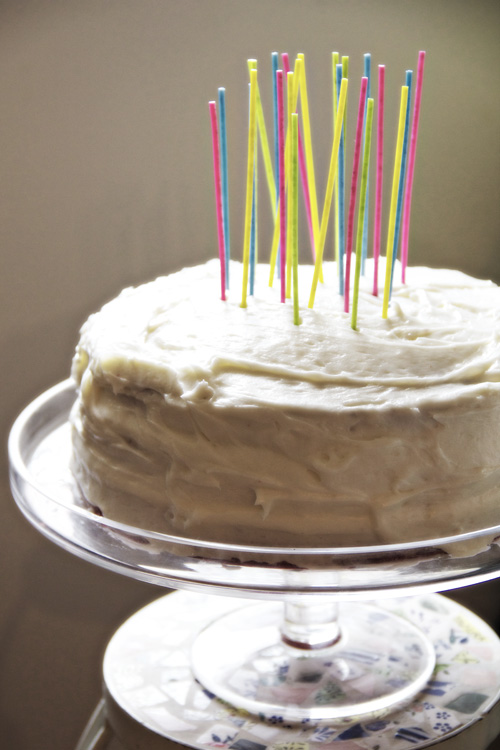 Today is Dan’s 27th birthday. Happy Dan’s birthday, internet!  I may have mentioned here, once or a thousand times, that birthdays are very important to me.  They’re not so important to Dan, but over the years I’ve been trying to nudge him in the celebrate-wildly-have-lots-of-fun direction.  It’s a slow process. 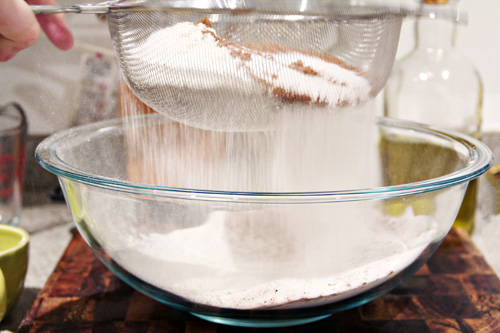 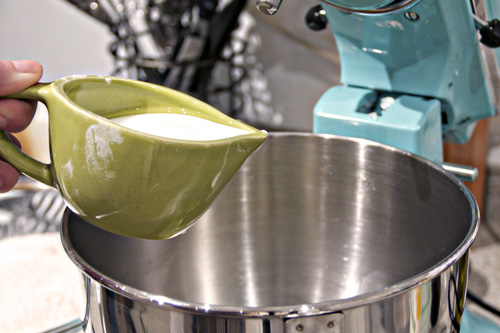 This year, by far, has been my most successful. To frame the story you should know that I am horrible at secrets and surprises.  Take for instance Dan’s 25th birthday, where I planned a whole surprise weekend, blind folded him, and drove around in circles to throw him off only to discover when we arrived that he had already figured out everything that we were doing.  It was a great weekend, but a major surprise letdown. 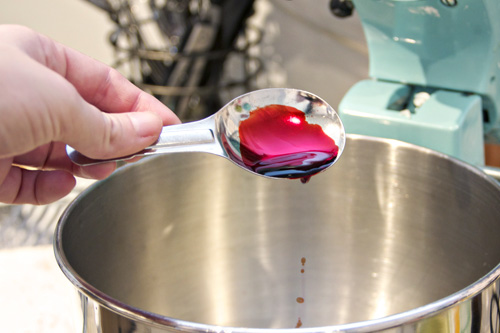 About a week ago, as we were driving between our three Christmases, I had the idea to throw Dan a surprise birthday party.  I started texting people to see if they were available, furiously began planning my cover story and how I would get him out of the house, and made a menu in my head.  By the time we returned home from the holidays, everything was planned and the party was set in motion. 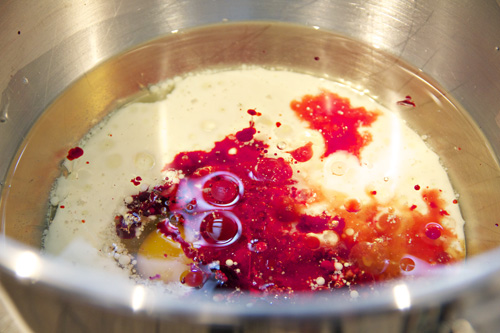 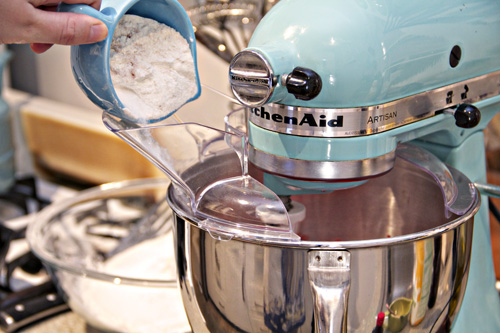 The problem with surprise parties is that there is an inherent layer of lies just to keep everything secret.  And because I am a very bad liar and Dan knows me very well, another layer of lies sprang into existence to explain the “I have a secret” face I kept making.  I wove a tangled webs of secrets and lies, and the more time went on the more confusing it became to keep it straight. Thankfully I only had to hold it together for a week. 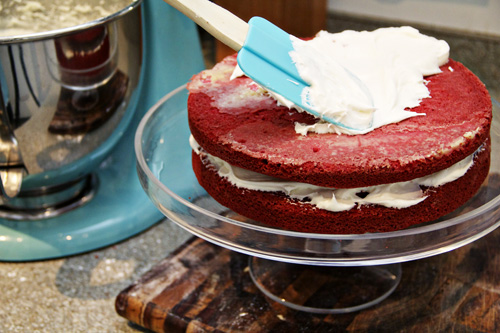 The basis of my cover story was that my very good friend Brit and her fiance Aaron were coming up to visit so that Brit and I could work on wedding stuff and Aaron and Dan could have guy time.  The boys ended up brewing beer, and then going out to a bar with our friend Gordon so that Brit, Charlotte (another good friend from school), and I could set up.  The “super secret wedding stuff” story was the saving grace, as the idea that there were things we had to do that Aaron couldn’t see was plausible and easily bought.  Also, the plan to have friends over for dinner meant that I could make pizza dough and a cake without arousing suspicion.  The boys whisked Dan away and we got to work hanging streamers, blowing up balloons, and making banners. 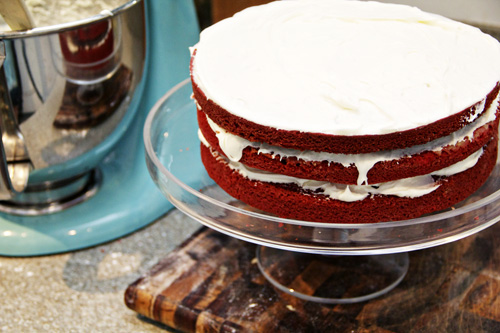 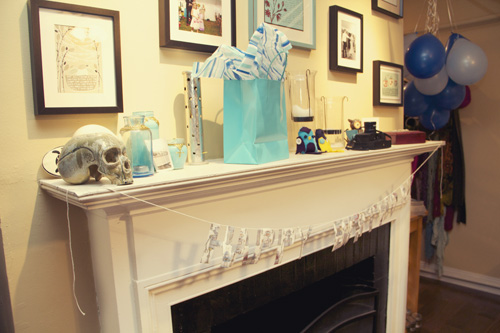 By 6.30 I had baked seven specialty pizzas (we did 10 overall), the apartment was transformed into a birthday wonderland, the fridge had been tetrised with an insane amount of beer (thanks, friends!), and we were all packed into the living room.  I was sort of convinced that Dan had figured out that the surprise was coming, so I was bracing myself for the disappointment.  Was I ever wrong.  As you can see in the photos and video below, they walked into the apartment and Dan just sort of looked around, shocked, for a few minutes.  It was glorious.  I have never felt so sneaky. 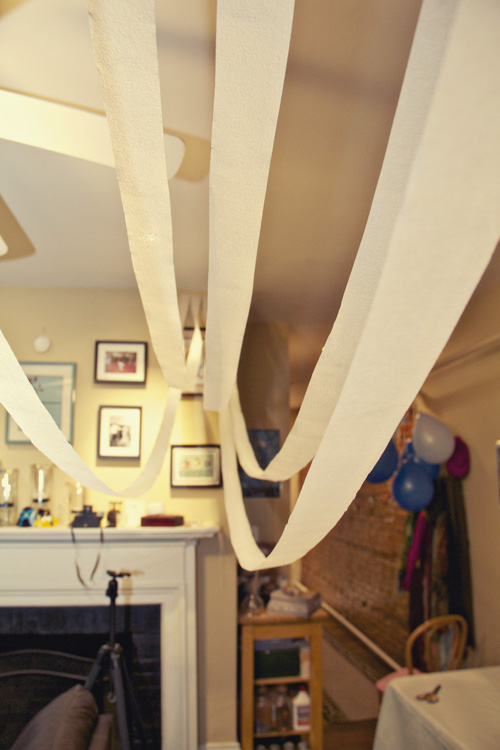 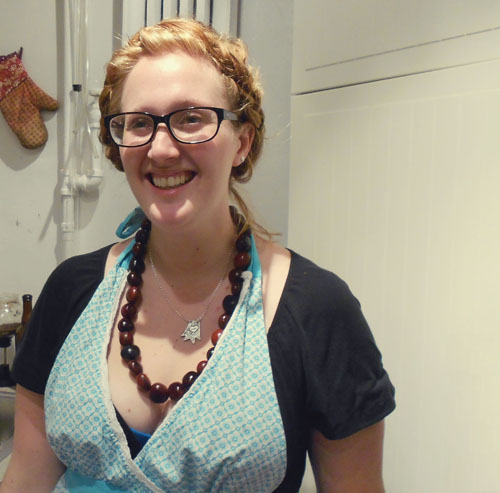 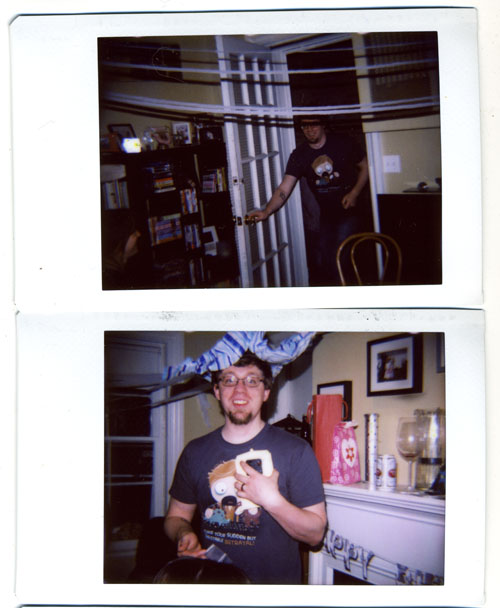 Ultimately this party was such a huge success because we have a group of amazing friends from school, work, water ballet, and life in Baltimore that came together to celebrate Dan.  And that was such a great feeling.  I couldn’t be more thankful for the help and secret keeping that went into this party.  Thankful, and sure that I won’t be doing this again for another decade or two. 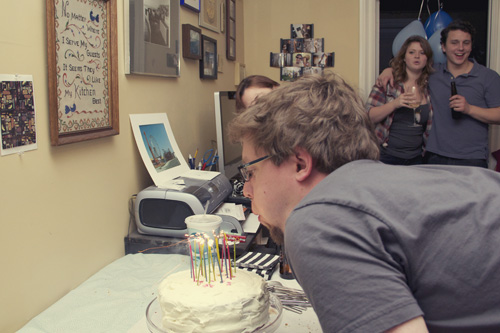 Yesterday (Birthday Day 2) we went out, got breakfast sandwiches, spent our Christmas gift certificates, curled on the couch and watched Twin Peaks, and generally relaxed. Tonight we’re getting all gussied up and going to a favorite restaurant, Woodberry Kitchen.  This year has been one of the best Dan’s birthdays yet! Happy Birthday to my sweet husband! 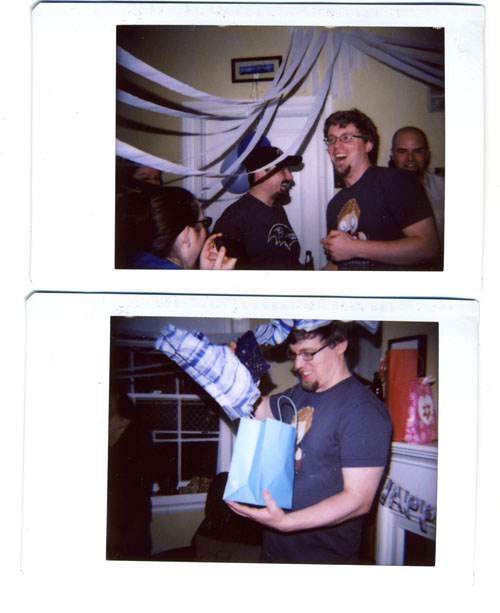 A small aside- this past week Dan and I decided to make a rather large business investment, we bought a new camera.  My wonderful, dedicated, steadfast Nikon D40 has been on its last legs for a while, and it was time for an upgrade.  We purchased a Canon 60D, plus a Canon 430 EXII Speedlite flash.  I’m still learning my way around both but so far they’re amazing and I’m SO excited for this next stage in my photographic life.  That, plus the Diana+ with an instant back, is the reason for the gratuitous photos in this post.  Thanks for putting up with me! 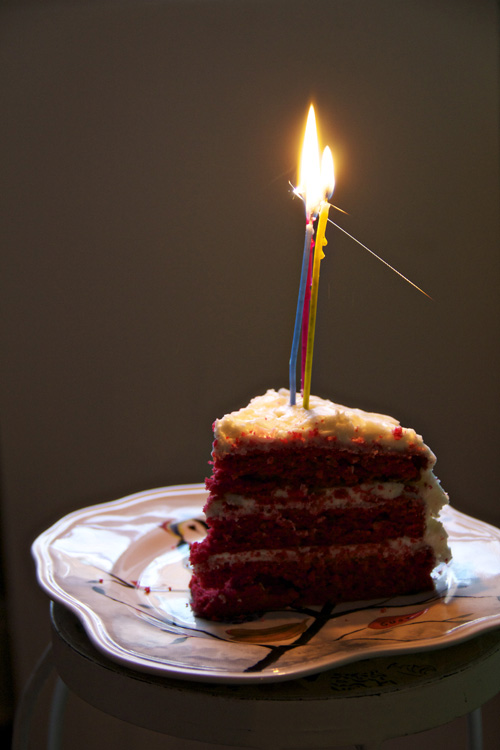 Preheat oven to 350.  Oil and lightly powder three 9 1/2″ round cake pans. Pour cake batter evenly between three cake pans.  Bake for 30 minutes or until cooked all the way through, rotating halfway. Transfer to racks and let cool completely.

To make the frosting, combine all ingredients in a mixer.  Beat slowly to incorporate and then on high until fluffy, approximately 4-6 minutes.