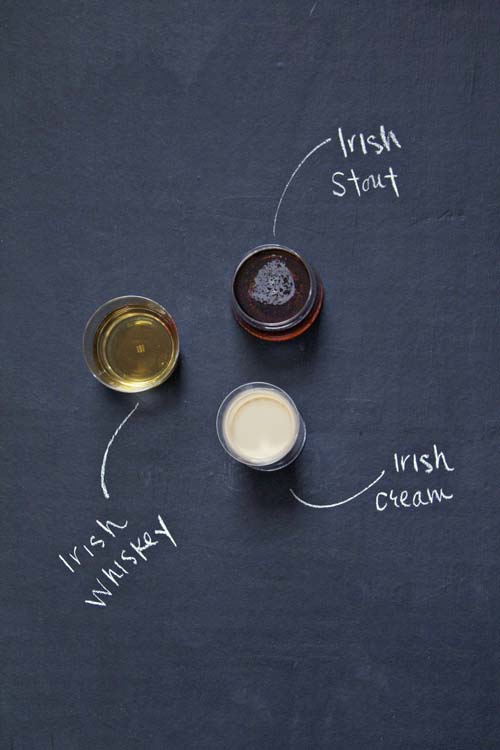 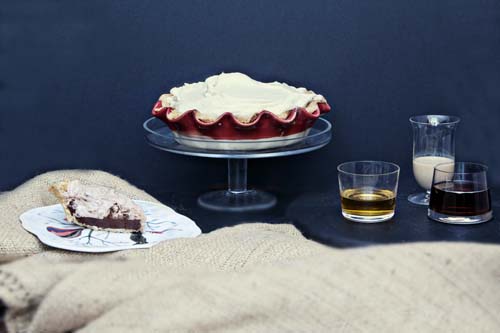 Last Saturday morning, I was laying in bed talking to my Grammy. She commented on the fact that we’d been eating (making and sharing, really) a lot of pie lately. We discussed what pie plans I had for that weekend, I tried to explain Berger cookies over the phone (difficult), she told me about some cookies she’s been enjoying (they’re like communion wafers sort of), and then she launched into a story about a pie she had made. Now, my family, on both sides, are born story tellers. A night out to dinner with my grandparents is better than a night at a comedy club. They’re hilarious, and they know how to deliver a line. Grammy’s pie was sort of a catch all pie of things she had around the house, born out of a craving for wanting to eat a pie. The way that Grammy cooks is very what’s-available– she started throwing things she thought might be delicious into the pie, including a little bottle of Bailey’s that she found in the fridge. 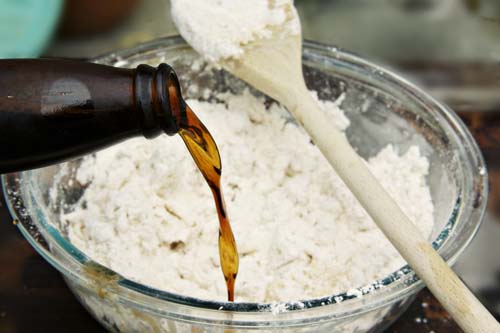 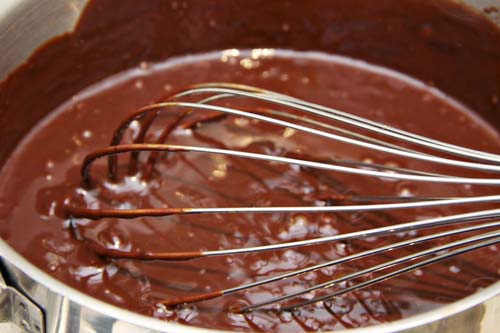 Now, for those of you not familiar, an Irish Car Bomb is a mixed drink that includes Irish stout, Irish whiskey, and Irish cream. The name refers to the ingredients, and is a kind of flip reference to a period in recent Irish history known (on Wikipedia anyway) as The Troubles.  The drink is made by mixing together whiskey and Irish cream in a shot glass, and then dropping it into a half filled pint of Irish stout. And then you have to chug it before it curdles. I don’t drink Irish Car Bombs. 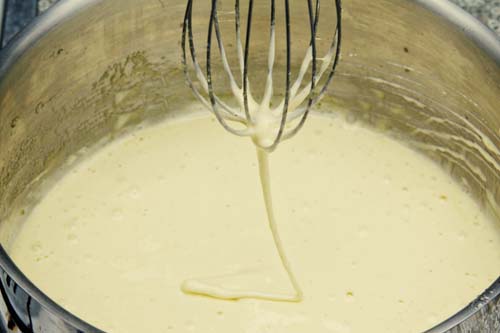 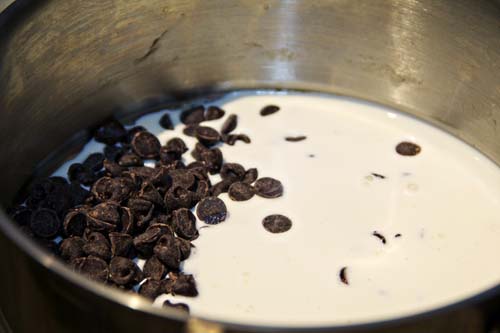 In fact, I don’t do shots. Let’s just say that I had a very memorable 21st birthday (my sister Lauren, Megan, and Dan were committed to my having a great time) and I’ve now done enough shots for a lifetime. But I’ve seen plenty of people drink them, my Irish grandfather thought the pie sounded good, and I figured, what the hell. Let’s make the booziest pie ever. Seriously, I out boozy-pied myself. 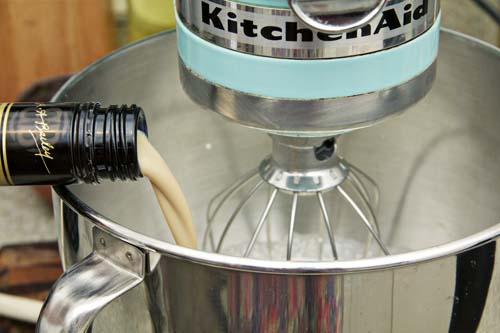 An Irish Car Bomb pie, in its final incarnation, is a stout crust, a layer of Irish whiskey ganache, a layer of stout pudding, and Irish cream mousse. However, that’s not how it started. The original pie was a stout crust, whiskey ganache, and Irish cream mousse. It was delicious. Seriously good, light, a total hit. But as Dan pointed out the next day, something was missing. It didn’t have the stout flavor that is so important in the drink (and Dan would know, he’s done many an Irish car bomb). So we went back to the drawing board and I decided to make a stout pudding. 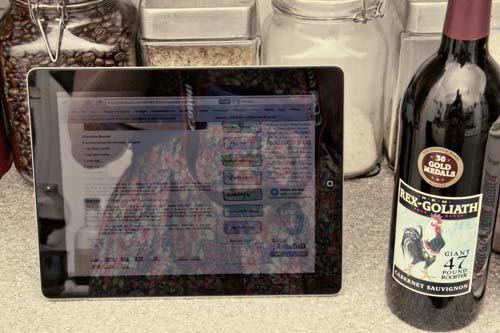 (the best part of having a food blog is having the online recipe book. two things i prefer to cook with- biscuits & such on my ipad and a glass of “chef’s juice”) 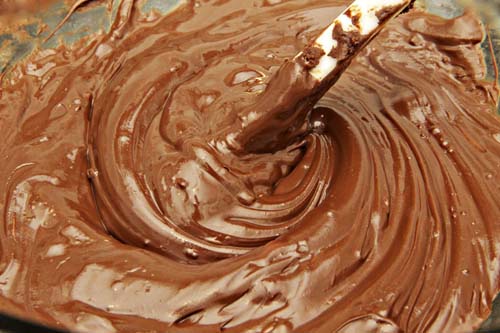 Originally I planned on making a chocolate stout pudding, but then, right before the part in the pudding process where you add the chocolate (after the stout had been incorporated), I stuck my finger in to taste. And it was delicious. Full of that unique Irish stout flavor, light but rich. I thought, why ruin it? Let’s keep this as close to the drink as possible! So I left it as is. 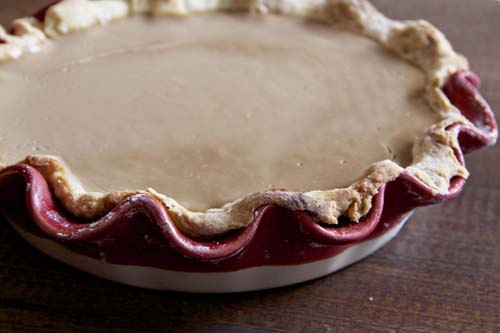 The final product was delicious. The stout pudding layer is unlike anything I’ve every had before, the whiskey ganache is completely decadent, and the Irish cream mousse is just… delectable. It’s rich, creamy, and very unique in flavor. I think it’s a perfect way to end National Pie Month this year, and it will definitely be on my table again. Thanks for coming along for the pie-filled ride, guys! Now excuse me while I go zumba off all this whipped cream. 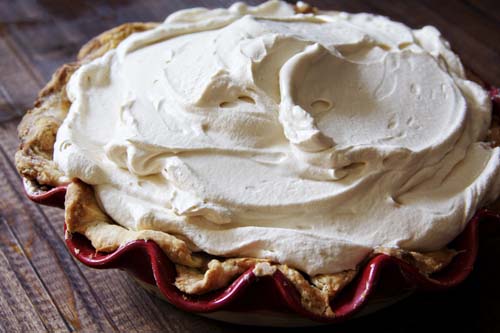 Irish Car Bomb Pie
This pie is best if allowed to set overnight, so plan ahead!

1/2 cup Irish stout (such as Guiness)

Begin by making your crust, the morning before you’d like to serve the pie. It’s a really delicious pie, but each layer needs some time to set. Combine dry ingredients in a bowl. Use your fingers to work in the shortening. Next, cube the butter and work that in. Pour in the whiskey, and mix with a wooden spoon. Next, add the stout. Stir until combined. Refrigerate for at least one hour.

After an hour, roll the pie dough out on a floured surface. Heat your oven to 350 and push dough into pie dish. Now, you’ll want to weight the crust with something while it’s baking so it doesn’t puff. I prefer dried beans, but they also sell fancy metal balls. Place a layer of parchment over your crust and fill with the weigher of your choice. Then bake for 30-40 minutes, or until golden brown and crispy.

While the dough is baking, make your ganache. In a double boiler combine the cream and chocolate, whisking until melted. Remove from heat and add ganache. When your pie crust comes out of the oven, pour the ganache into the bottom. Let set for at least three or four hours, until firm.

Once your ganache has set, begin with your pudding. In a double boiler combine sugar, salt, and cornstarch. First whisk in the cream, then the milk, then the stout. Over a medium boil, stir occasionally (making sure to scrape the bottom), until the pudding has thickened. Remove from heat and allow to cool slightly. Pour the pudding on top of the ganache and refrigerate for two hours.

After your pudding has cooled and set, begin with your mousse.  Heat chocolate in a double boiler.  You don’t want the bottom of the bowl to be making direct contact with the water.  The water should also be slowly boiling, not rapidly.  Stir the chocolate occasionally until it’s melted and smooth.  Remove chocolate from heat, but keep the water simmering.

Whip heavy cream and Irish cream together until it holds soft peaks.  Cover and refrigerate.

Whisk egg yolks, egg, salt, and sugar together until foamy and light.  Place over saucepan and whip with electric beater.  Move the whisk in a circular motion until the eggs are fluffy and hot to the touch.  Don’t keep it over heat too long, or your eggs will scramble.  Remove from heat and continue beating on high for five minutes until thick ribbons fall from the beater when lifted.  Whisk in water.

Fold 1/4 of the egg into the chocolate.  Incorporate completely, then fold in the rest.  Finally, fold in the cream to make it smooth and light.