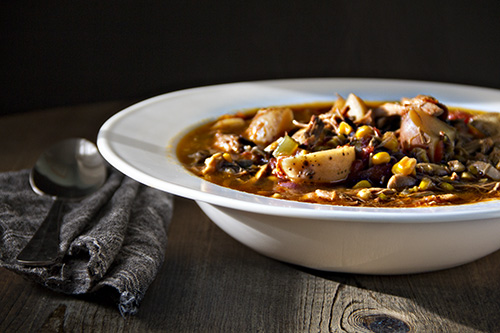 When Caroline & I were divvying up the recipes for the cookbook, I was both elated and terrified to find Brunswick Stew end up in my pile. As you may know if you’ve been following this blog for a while, my family takes Brunswick Stew very seriously. It takes days to make it in the backyard in my great grandmother’s cauldron. We don’t mess around. So the idea of developing a stovetop version of this recipe that did justice to the stew my family cherishes? Terrifying.

I ended up creating what I think is a masterpiece. Started in separate pots the chicken and the pork cook to perfection and then are combined, along with all their juices, to create a stew that tastes like it took way longer than 8 hours. Which, you’ll remember, is a fraction of the time I think Brunswick Stew should take to cook. Unfortunately DK didn’t think that the average home cook was really going to spend 8 hours cooking a stew in multiple different vessels so they sent me back to a drawing board. I have a suspicion, however, that at least a handful of you ARE just the kind of home cooks who have been looking for something that tastes authentic but isn’t quite as involved– something that you’re happy to let simmer on your stove one chilly Sunday. Something that will feed your family all winter because this stew freezes like a dream. I know you’re out there, and this recipe is for you. 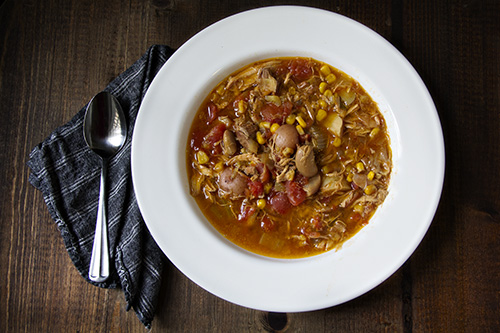 Place chicken in a Dutch oven or slow cooker, cover with water, and season with salt, pepper, and 1 tsp red pepper flakes. Cook on 250/120C for 4 hours or until meat falls off the bone easily. As the chicken cooks brown pork in large soup pan. Brown 30-45 seconds on each side and set aside.

Return pork to pot and reduce heat to simmer. Stir in Worchestershire sauce, salt, pepper, and red pepper. Continue to simmer until the chicken is cooked.

Pull the chicken meat off of the bone and add it to the soup pot, along with the chicken’s cooking liquid. Stir well, breaking the pork apart with your spoon until it is shredded, and return to simmer.Simmer an additional 2-4 hours, stirring occasionally. Season to taste and serve hot.