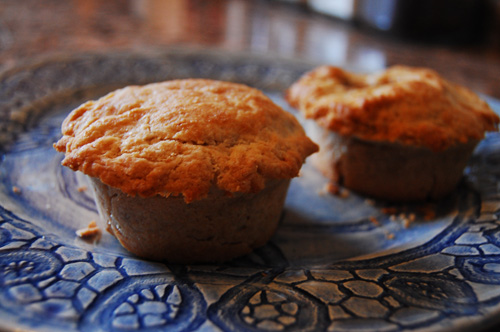 I know, I know, two pie recipes in a row?  What can I say, I love pie (I’m a baker at heart.  I only cook real food to appease my stomach).  Also, thanks to a tornado warning in D.C., I unexpectedly got the day off.  And since Dan had already mentally committed himself to playing video games all day, I decided it was the perfect opportunity to test a new recipe.  That, and it’s pie season.  I have to stay on my game. 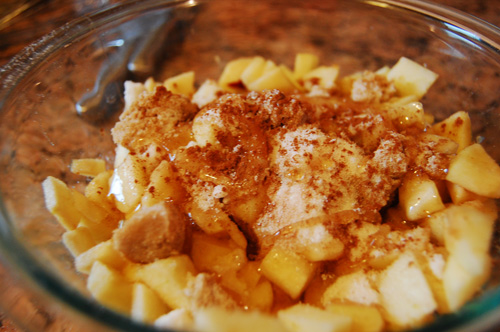 I’ve wanted to make cup pies, or miniature pies baked in a cupcake dish, since that fateful episode of Pushing Daisies where Chuck convinces Ned to add cup pies to his menu, with her honey baked into the crust.  Which, by the by, is a show that I could not love more.  And the fact that pie is a central character helps.  It’s all the crime I love from CSI in brilliant colors, with quirky characters, and pie. 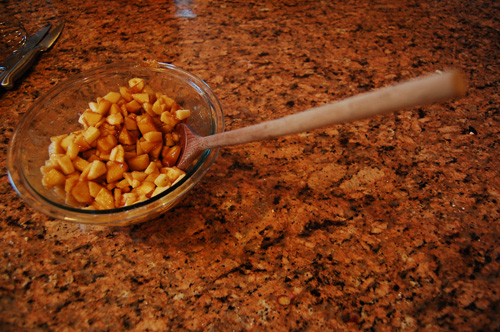 Anyway, I’ve made miniature pies before, but in those novelty shaped aluminum dishes, with mediocre results.  And since the holidays are soon approaching and I’d like to show up for Christmas with an assortment of holiday cup pies (chocolate chess, pumpkin, pecan, sweet potato, etc), I thought I’d test the recipe out before hand. 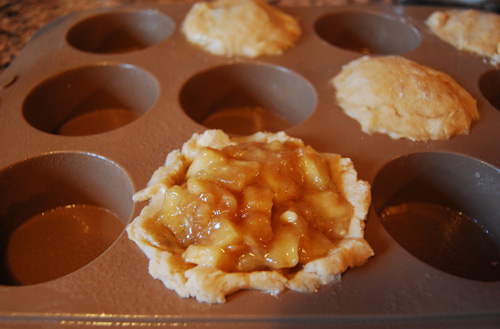 I started with my basic pie dough recipe, to which I added brown sugar, cinnamon, and honey.  I also cut the recipe in half.  Other than a few things, cup pie baking is essentially pie baking, just smaller.  Be sure to cut your apple pieces very small (I would suggest 1/4″ chunks).  Also, lightly grease your cupcake pan.  I use silicon bakeware for cupcakes, pound cakes and bunt cakes because it’s just so much easier to get them out.  Believe me, I ruined a right many cupcakes because half of them stayed behind in tin (Which, incidentally, is where the cupcake cake came from). 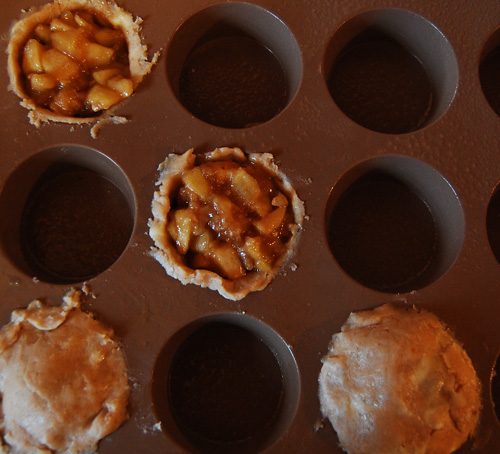 When you’re putting the bottom crust into the pie dish, leave a nice lip, so that you can attach the top to the bottom.  The first few I did I failed miserably, but got the hang of it by the last one.  These pies are delightfully adorable, enjoy!

Once your crust is made, melt butter in a saucepan.  Peel, core, and dice apples.  Since these are mini pies, you want them to be smaller pieces of apple.  Toss the apples in sugar (brown and white) and cinnamon, and two tbsp of honey.  Simmer in melted butter until the apple pieces are soft.  Stir in vanilla and flour, and remove from heat to let cool.

Take your dough out of the fridge, and preheat your oven to 425*.  Lightly grease your baking pan.  Now, I know that  you’ll be cursing me for this while you’re applying the dough, but it’ll save you broken-pie heartache down the road.  Press dough into alternating cupcake holes, leaving a 1/4 inch lip over the edge. Fill with apple mixture, and press top on, making sure to pinch together the top and bottom crusts.  This is more important than when you make a regular size pie, because these are leaving the dish, to stand alone.  They can’t be falling apart.

Whisk together egg and remaining honey.  Sprinkle the pies with brown sugar, brush with egg mix, and cut slits into the top.  Bake for 15 minutes at 425*, then reduce the heat to 350* and bake for another 15 minutes.  Keep an eye on them- they’re so small they could easily burn.

Remove from cupcake pan and serve.