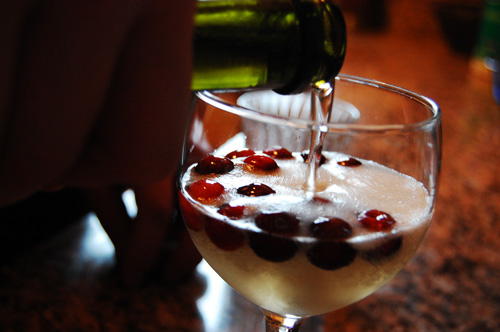 Iron Chef America, anyone?  Last week they had a Thanksgiving special.  They had to use ingredients from the first Thanksgiving (no thank you plucking duck feathers), so I was only mildly interested in recreating the recipes.  There was one thing that struck my fancy, which Dan and I were determined to recreate.  Naturally, it’s a cocktail.  Unfortunately for me, Iron Chef doesn’t post it’s recipes anywhere so I couldn’t figure out what was going on, exactly.  So this is our interpretation of whatever deliciousness Iron Chef Symon made.  He started with cranberries, whole fresh ones.  Then he added vodka to the glass.  He let that sit for a bit, and right before serving he filled the glass with champagne. 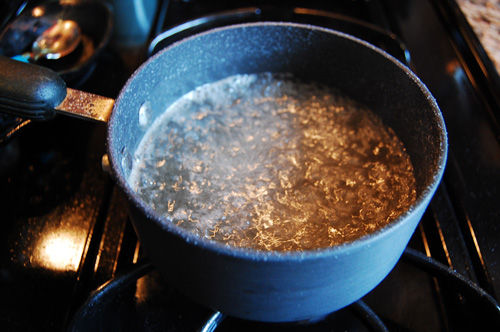 I figured that the flavor of the cranberries wouldn’t come out if they were just left whole, they’re pretty resilient little things.  So I opted to make a simple syrup to accompany them.  I also went light on the vodka because I didn’t want to be down for the count. 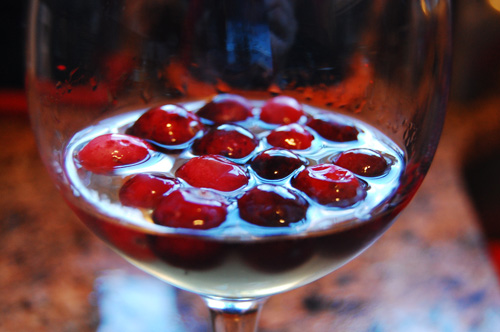 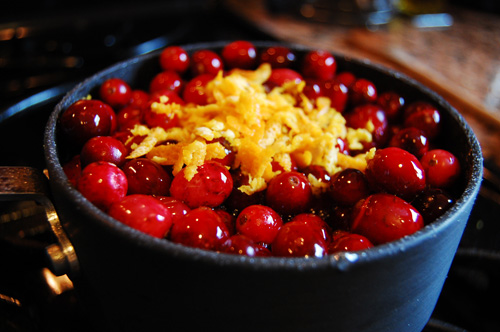 Bring your sugar and water to a boil.  Once the sugar is dissolved, set aside and cool.  That’s your simple syrup.  Put your cranberries the glass, add simple syrup and vodka (equal amounts of each).  Let sit for ten minutes or so, so the flavors blend.  When you’re ready, add the champagne, and serve.