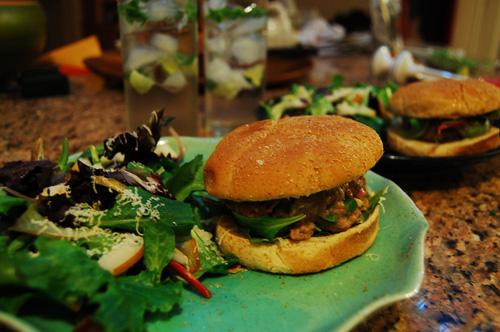 Making these burgers today was a comedy of errors.  In the morning, we walked to the co-op near our apartment to get some things, and as soon as we got back the “doh” moments of things I had forgotten for the burgers began.  I forgot fresh ginger, pepperjack cheese, new limes, and new cilantro.  And that’s like… most of the recipe. 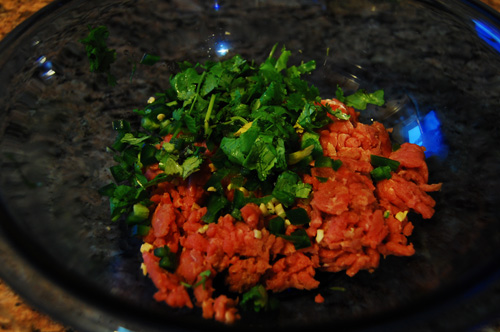 So, I had to make due.  I mean, logically, I could have gone out again.  But I was already in my pajamas and didn’t remember I had forgotten half of the things until I had already starting the patties, so I opted to make due.  Instead of fresh grated ginger, I used dried ground ginger.  This worked in a pinch, but really, I don’t recommend it.  The grated ginger in these burgers really pops, and it’s an intense flavor. 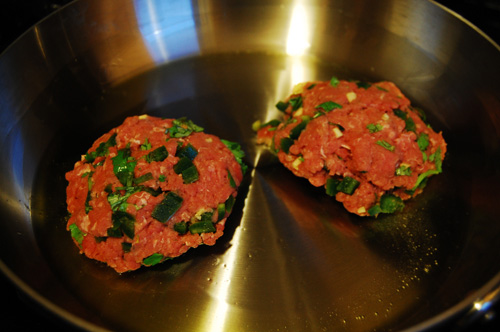 The other ingredient I completely forgot was the pepperjack cheese.  I like pepperjack on this burger because the spice of the cheese plays off the other flavors.  But since I didn’t have any, I had to go with what I had, which was gruyere.  So, I toasted the buns, brushed them with oil, and sprinkled them with grated gruyere and ground ginger.  And it was perfect.  The toasting was a good idea anyway because it balanced with the juiciness of the burger nicely.  The gruyere was more subtle, and didn’t compete with the flavors, just intensified.  It was perfection. 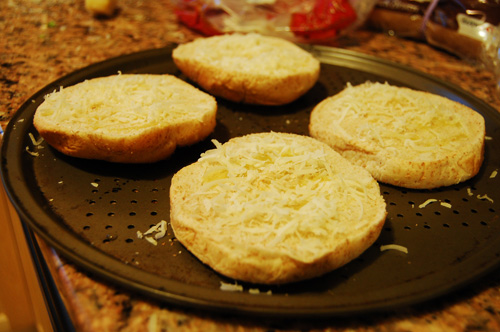 Not that he’s biased, but Dan thinks that this is my best original dish.  It’s a great burger because it’s turkey so it’s better for you, but it’s not dry because the jalapeno and the cilantro keep the meat moist.  It’s spicy and sweet at the same time, and there is so much flavor packed into each bite.  I served it with a mixed green and pears salad and a mojito.  Mmmmmm. 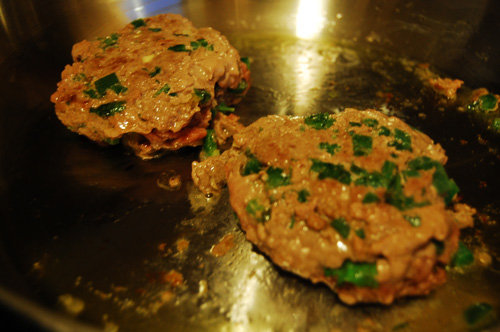 1/4 cup gruyere cheese, plus some for sprinkling

Chop your jalapeno, cilantro, garlic, and ginger and add to ground turkey.  Use your hands to knead it all together.  Form into patties, about 4 inches wide and 1/2 inch thick.

Heat 1 tsp of olive oil in your pan.  Place the patties in the pan, over medium heat.  Turkey takes a little longer to cook without drying it out, about twenty minutes over medium heat.  Flip them every five minutes or so, and make sure they don’t get burned.

Brush your buns with olive oil and sprinkle ground ginger and gruyere.  Bake at 300* for about five minutes.

Once your toast has gotten nice and crispy, top with mixed greens and sprinkle a little more grated gruyere on the greens.  When your burger is fully cooked, place it on top of the mixed greens and drizzle with lime juice.