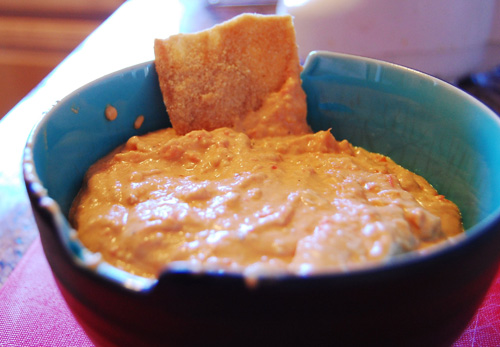 Dan and I are always looking for things that we would usually spend a lot of money at the store on that we could make at home for a lot less money (soon I’ll share the  Irish Cream recipe).  Things like pesto, spiced and flavored olive oil, and as of today, hummus.  Last weekend Food Network aired two back to back episodes of Unwrapped  about dips, and after an hour of watching giant machines make hummus, I decided I could do it at home. 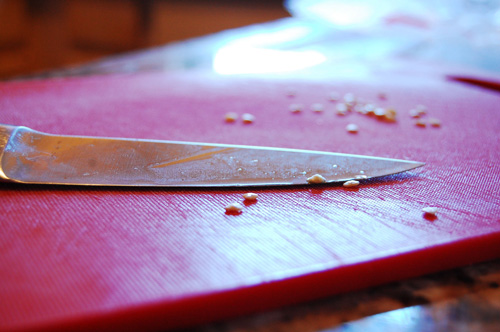 I spent a few days looking at recipe books and blogs, trying to get a good idea of the approximate proportions ratio- how much tahini to use with a certain amount of chickpeas, etc.  I decided to start with roasted red pepper hummus, because, frankly, that’s my favorite flavor to buy.  The only tricky part in the recipe was locating tahini, the grocery store didn’t have it, so I ended up going to the local co-op.  There I had the option to buy it in a can or scoop out my desired amount from big vats.  The scoop-your-own-nut-butters area was very crowded (Sunday afternoon food shopping hazard), so I bought it in a jar. 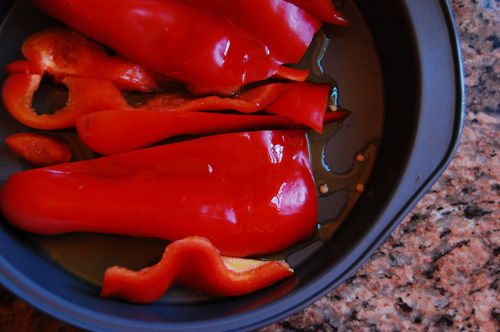 Roasting vegetables, for those who have never done it, is very easy.  Just drizzle some olive oil over the pepper and throw it in a 400* oven for twenty to thirty minutes.  The benefit is that the olive oil is flavored after the vegetables are roasted, and you can use that in your hummus.  When roasting tomatoes and peppers, the way to tell that it is done is if the skin starts to bubble off the core of the vegetable.  Also, it smells heavenly. 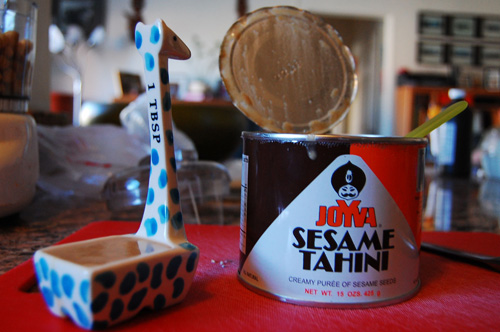 My only other advice for hummus making is that after you’ve finished blending it, you let it cool in the refrigerator for a few hours.  This not only brings the temperature down, it also allows it to flatten down a little.  The blending really fluffs it up, so settling in the fridge makes it better dipping. 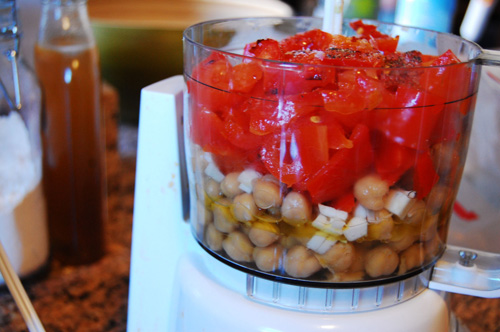 Core your red pepper.  Place in a baking pan and drizzle with 4 tbsps of oil.  Roast in a 400* oven for thirty minutes, or until the skin has bubbled off the pulp of the pepper.

Dice your garlic and combine it in a food processor with garbanzo beans, tahini, spices, and the remaining olive oil.  When the peppers are done, dice them and add them to the processor, along with the oil left over in the pan.

Grind  in the processor for about three minutes, or until it’s smooth.  Taste it to make sure you have enough pepper, and then cover and refrigerate for an hour.  Serve with pita chips.