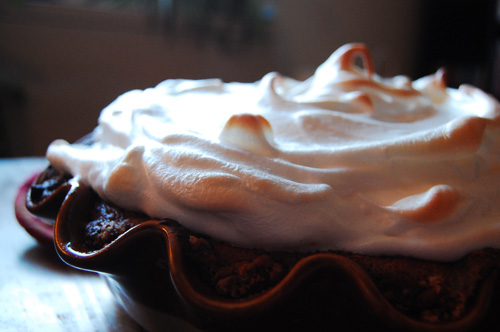 Tonight I attended a potluck for D.C. foodbloggers at Union Row in D.C., hosted by an array of area food bloggers.  It was good times.  It was actually super different times because while Dan and I are both social people (theoretically) we’re not big on the D.C. scene, we mostly just stay cloistered in our tiny apartment eating pie.  So when we are confronted with 30-40 REAL. LIVE. HUMAN. ADULTS. we’re struck (or maybe I’m just speaking for me) with paralyzing social anxiety. Whatever, Dan is fine and I’m a dweeb. 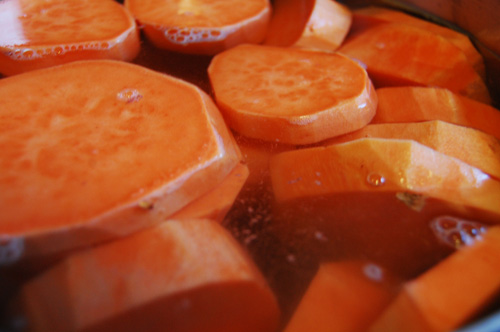 As it is Dan and I are working on eating more seasonably and locally (see the new life list), but since some of the attendees have blogs completely dedicated to seasonal local produce and the likes, I figured my contribution better be seasonally appropriate.  Since we’re just coming off the high of the holiday and my new motto for losing the cookie weight is “fatties don’t deserve treats” I was stumped about what dessert to bring.  And then I said screw it, you’re a southern food blogger and tonight you’re representing your people.  And my people love butter. 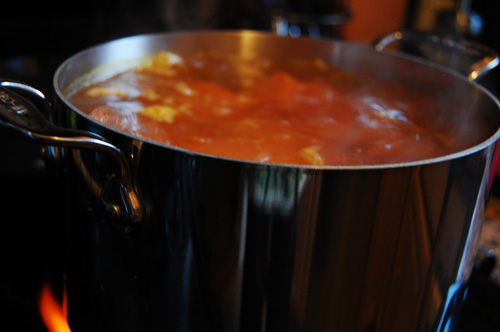 So I opted for a sweet potato pie topped with a marshmallow meringue.  Go big or go home, right?  I chose this combination for a few reasons.  First of all, we had my (delightful) friend Julia over a few weeks ago and she was telling me that she uses this Bill Neal recipe for sweet potato pie where you whip the egg whites separately into a frenzy and then fold them in so that your pie has more fluff and height.  And I love fluff and height.  Secondly, we watched the White House Iron Chef special last weekend and the winning team did a meringue topped sweet potato tart that looked awesome. 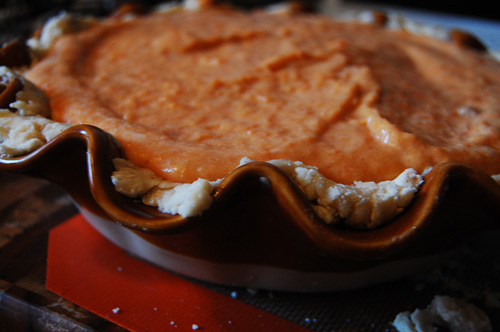 I’m not usually one for marshmallow topped sweet potato pie but I polled Dan and the internet and the results came in overwhelmingly for the fluff.  Which leads me to my next point, which is that marshmallow fluff has to be the most disconcerting ingredient I’ve ever worked with.  It’s one of those 50’s-era things that I always envision being eaten in space.  Like Tang.  But when combined with egg whites and sugar it was just fluffy and lovely and browned in a very pretty way that made it both impossible to transport and delicious. 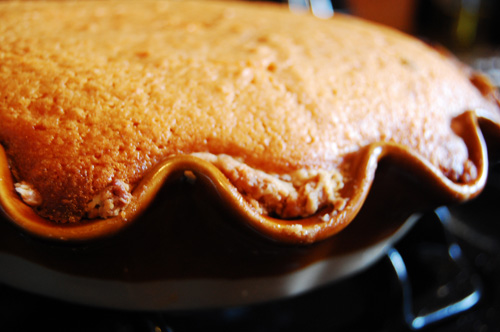 It did dawn on me that pie was maybe not the best dish to bring.  For one, regular size pies (as opposed to cup pies) are not finger foods.  I wasn’t aware that this was a fingerfood event beforehand, so the whole pie thing sounded like a great idea.  In reality I could have chosen a less messy dish.  I was just really tired of cookies.  Secondly, I put this in one of my favorite pie dishes, which meant that when Dan and I were ready to cloister ourselves at 9 I had to take half an uneaten pie home with us.  Great for us but this guy gave me the stink eye as we were leaving like I was being stingy with my food.  All in all, it was fun to meet some local food bloggers, get outside of our shell for once.  We even met someone that looked like Kara Thrace from BSG (geek alert)! 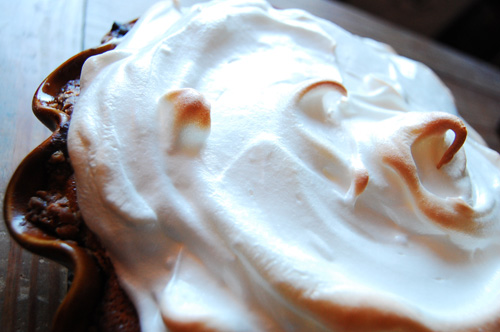 Peel, cut, and boil the sweet potatoes so that they’re tender.  Drain and put them in a large mixing bowl.  Use a masher or fork to mash them completely, leaving no chunks.

Cube the butter and stir it into the hot potatoes.  Separate the eggs and add the yolks to the potatoes.  Set aside the whites.  Add the vanilla, spices (not cream of tartar), and brown sugar.  Stir in cream.

In a stand mixer or with a hand blender whip the egg whites and cream of tartar.  Whip until frothy.  Add white sugar, a tablespoon at a time, and whip until stiff.  Fold into potato mixture.

When the pie is cool, start your meringue by whipping egg whites, cream of tartar, and vanilla.  When it’s frothy, add in sugar one tbsp at a time, until it is stiff.  Fold in the fluff.  Spread over pie.

Bake at 375 for 6 minutes, or until the peaks have browned and the meringue is firm.