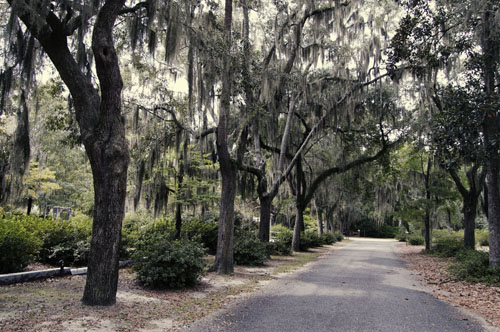 This past weekend Dan and I visited Savannah and Charleston to celebrate our second wedding anniversary. This trip, the farthest south we’d ever been together, was wonderful and memorable. Savannah is completely stunning and Charleston is one of my favorite places, ever. Here’s a not so little recap of what we saw, ate, and drank, plus some photos and a little film.

The Furthest South from elena rosemond-hoerr on Vimeo.

In Savannah we explored the shopping district, saw taffy being pulled and wrapped on a contraption straight out of Chitty Chitty Bang Bang, watched giant boats on the river, ran around in the rain, walked around the beautiful gardens and squares, visited the country’s only gothic synagogue, explored the stunning Bonaventure Cemetery, and marveled over all the Spanish Moss. Have you ever seen so much Spanish moss?

On Tybee Island we visited the lighthouse, got our toes wet in the ocean, walked a beautiful pier, and came very close to some alligators. 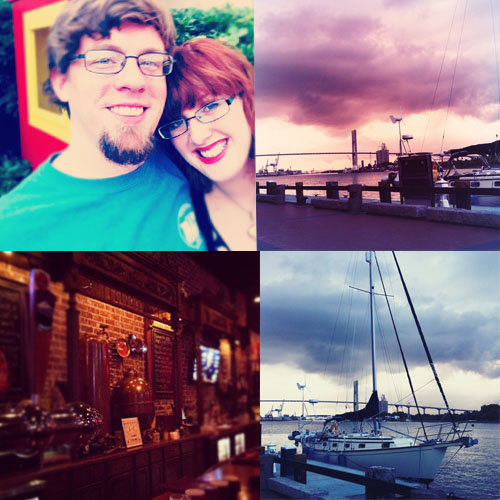 From top left: Dan & Elena on River St, the river, The Distillery in Savannah, boats on the river.

In Charleston we bought matching Tom’s to celebrate our cotton anniversary, drove through Battery Park and looked at the beautiful homes, tried (in vain) to spot some dolphins, and decided that Charleston is totally our kind of town.

On Folly Beach we put our toes in the ocean again, gave out our friend Dana’s website a lot (because everyone loves my bunting necklace), and squeezed the Megan.

In Mt Pleasant we got to see the Megan all relationshippy with her Tristan (and I didn’t say I-told-you-so once, even though I’ve been telling her so since we were sixteen), we taught this lady that looked like Heather Armstrong how to tell boy sharks apart from girl sharks, I let Heather borrow my glasses so she could show her boyfriend how she’d look as a librarian (questionable on my part but I can’t say no to people), and we watched a couple make out against their car for an hour. 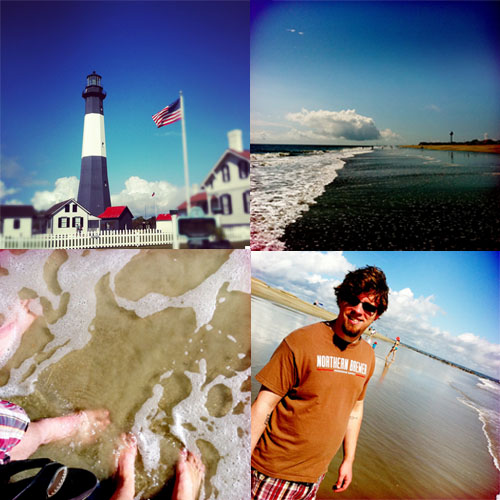 What We Ate & Drank:

One rule that we made for ourselves this trip was that we were only going to patronize small, locally owned businesses, even on the road. This proved more challenging than the easy Wendy’s stop, but ultimately it made the drive (all 24 hours round trip) feel like part of the vacation. Here’s what we ate and drank:

– Friday dinner, Baltimore. Burritos from our favorite neighborhood place, On the Hill. I had the John St (vegetarian), Dan had the Rutter (pork). 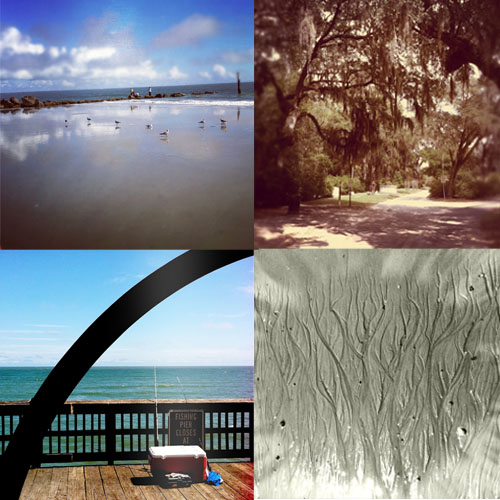 From top left: seagulls on the Tybee Island beach, Bonaventure Cemetery, pier on Tybee Island, lines in the sand

– Saturday lunch, Walterboro, SC. We stopped in Walterboro because the billboards boasted a historic district. We had lunch at the Main Street Grille, where the SC Gamecocks pride was strong. Dan had a burger, which he said was good. I had the Colleton County Fried Shrimp & Grits, which were great. In fact, they were better than any dish of overpriced grits I’ve had in the North, which proves my theory that you should stick with what you know. 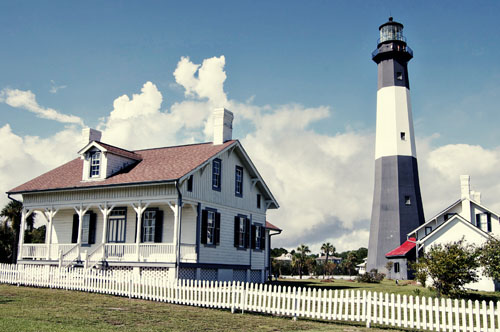 – Saturday, Savannah, appetizers and drinks. When we got to Savannah we showered and headed out to explore the town. As you can imagine we went into this trip with quite a bucket list. We stopped first at Moon River, where we had their Rosemary IPA. It was awesome. Then we walked around a bit, had some raw honeycomb at The Savannah Bee Company, and escaped the rain for beers, potstickers, and onion rings at Murphy’s Law. The food wasn’t anything to write home about (bar food) but it was pouring and the atmosphere was nice.
– Saturday, Savannah, dinner. After wandering around indecisively for a while trying to decide what to do for dinner, we ended up back at Moon River. Dan had the Asian Chicken Salad, which was good. I ordered the Fried Green Tomatoes, which were easily the biggest disappointment of the trip. Not to get on a soapbox but y’all, breading needs to taste like something, especially when paired with an ingredient that doesn’t have a complex flavor. These tomatoes were bland, topped with crab meat that was too salty. It was a let down, especially because the menu boasted a 150 year old recipe. 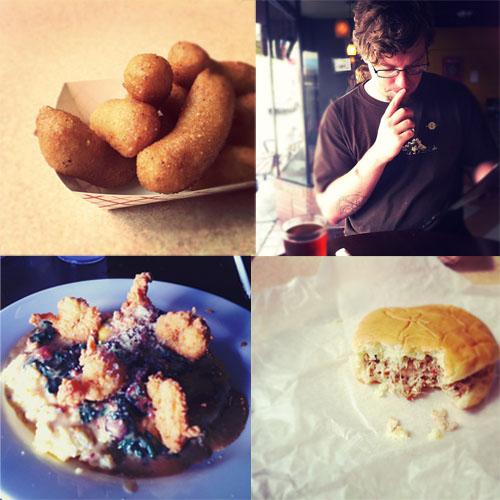 – Sunday, Tybee Island, lunch. On Sunday we headed out to Tybee Island to see the sights and put our feet in the sand. Afterwards we went to the Tybee Island Crab Shack, one of those awesomely awful tourist traps. Dan had a bbq chicken sandwich that he said was good, if a little dry, and I had two dozen oysters that were amazing. We also shared a deviled crab that was crazy good. A ketchup and hot sauce based crab cake served in a crab shell. Super tasty. Also, the people watching here was ah-mazing.
– Sunday night, Savannah, appetizers. We started Sunday with a trip to Savannah beer haven, The Distillery. We loved this place. We had a few beers (including the Creme Brûlée stout by Southern Tier) and fried pickles with a perfectly seasoned breading and awesome sauce.
– Sunday night, Savannah, dinner. After walking around the shopping district we grabbed quick sandwiches at Dockside Seafood. To be honest, at that point I really didn’t feel like a big fancy dinner, I just wanted something easy. I had the seared tuna sandwich, which was pretty good. Dan had the crab cake, which was more breading than crab.
– Sunday night, Savannah, drinks & dessert. After grabbing sandwiches we walked around a bit more and decided we really wanted more of The Distillery. We headed back, had a few more beers, and, wait for it, a DEEP FRIED MOONPIE. Y’all, that was amazing. It was a moonpie, dipped in chocolate, dipped in pancake batter, and fried. Heaven. 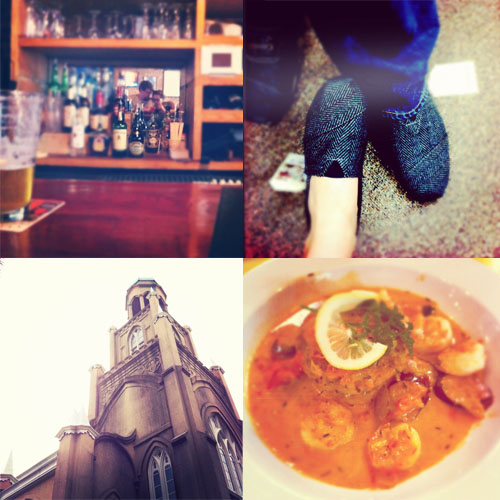 From top left: Our reflection in the bar mirror, our cotton anniversary Tom’s, Mikve Israel in Savannah, Lowcountry Crab Cake from Soho South in Savannah

– Monday, Savannah, lunch. Monday we explored more of Savannah’s historic squares. We planned on eating lunch at the heavily recommended Mrs Wilkes, but the line was hours long, outside, and the weather was swampy. We were not strong enough to tough it. Instead we stopped into the next place we stumbled upon, the Soho South Cafe. Dan had the grilled cheese and tomato bisque, which was apparently amazing. I had one of the best meals I’ve ever had in the Lowcountry Crab Cake. This dish was a crabcake (mostly crab) over grits, with shrimp, andouille sausage, and a tomato cream sauce. Holy wow. Go there, eat that.
– Monday, Charleston, drinks & appetizers. After lunch we headed north to Charleston. We went straight to King Street and, after buying our matching anniversary cotton Tom’s, we hit Closed for Business. Featuring 40 something craft beers and beautiful decor, Closed for Business was a great stop. After a beer we walked across the street, just in time for happy hour at Charleston Beerworks. Beers and tots, perfection. At both bars we had the opportunity to try some local beers (particularly from Holy City), which is always nice. 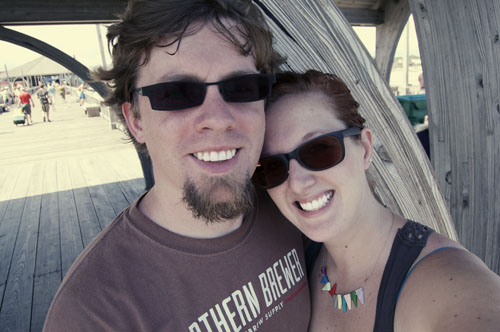 Dan and Elena on Tybee Island

– Monday night, Folly Beach, more appetizers. Next we loaded up and headed to Folly Beach, also known as The Edge of America. We met Megan at Rita’s, also known as the home of the most delicious nachos on the planet. I’ve been dreaming of these nachos since my visit last October. We had margaritas (duh), and nachos– blackened tuna nachos with black beans, queso, and watermelon pico de gallo. So damn good.
– Monday night, Charleston, dinner. For dinner we went to Fuel. Dan had the pork tacos, which he reports were phenomenal. Megan and I each had the Fried Goat Cheese salad, which was good, but needed a punch of flavor.
– Monday night, Mt Pleasant, drinks & dessert. After dinner we headed to Mt Pleasant to meet Megan’s boyfriend Tristan for drinks at Coleman Public House. We had some great beers, Megan and I shared her first creme brûlée, and Tristan got tasty crab and corn fritters. 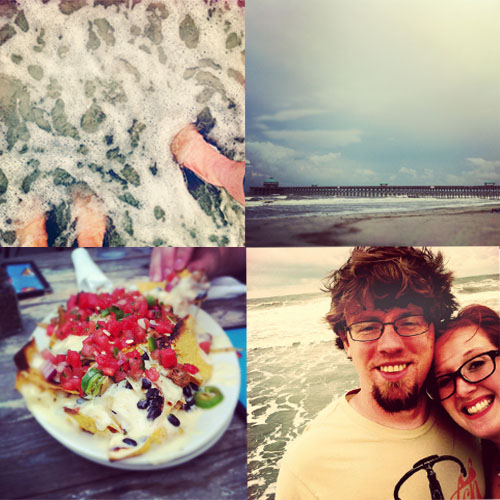 From top left: Our feet in the water on Folly Beach, Folly Beach pier, tuna nachos at Rita’s, Dan and I on Folly

– Tuesday morning, James Island, breakfast. Most mornings we ate breakfast a the hotel, so Tuesday after leaving Megan’s was our first real breakfast experience of the trip. We headed (at Megan’s strong urging) to Bagel Nation for breakfast sandwiches and snickerdoodle coffee (!).
– Tuesday, lunch, Benson. On the road Tuesday we found ourselves in Eastern NC around lunchtime. Luck found us near White Swan BBQ and Fried Chicken just as our stomachs were starting to rumble. Exactly what we needed- eastern NC bbq with cole slaw, hush puppies, and sweet tea.
– Tuesday, dinner, Baltimore. Pasta with homemade pasta sauce at home, finally. 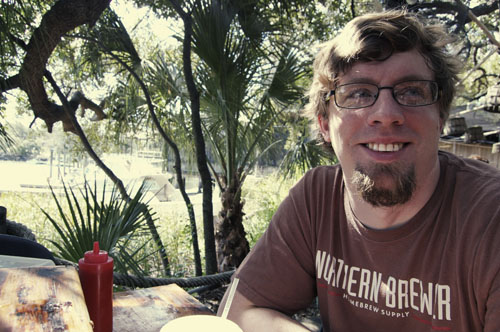 Dan at the Crab Shack on Tybee Island

Video & Photo Information: Photos taken with my Nikon DSLR & iPhone (using Instagram and Hipstamatic apps). Video taken with the 8mm iPhone app. Music is Rocks and Daggers by Noah and the Whale.