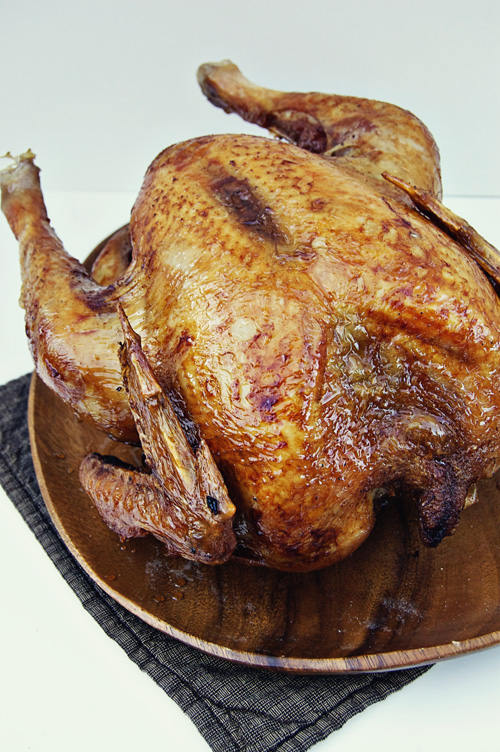 For those of you who have followed the blog for a while, you may remember that last year Dan and I fried our first turkey together. It was an awesome learning experience and that turkey was delicious, but it was kind of terrifying and afterwards I got a lecture from the Captain about wearing protective wear (says the guy who fries turkeys in his garage).  So, this year, we went into the whole turkey frying thing a little more cautiously.  Meaning, Dan read the transcript from the Alton Brown turkey frying episode. Y’all, that is exactly why I love my husband.  Because he reads tv show transcripts to learn. For funsies. 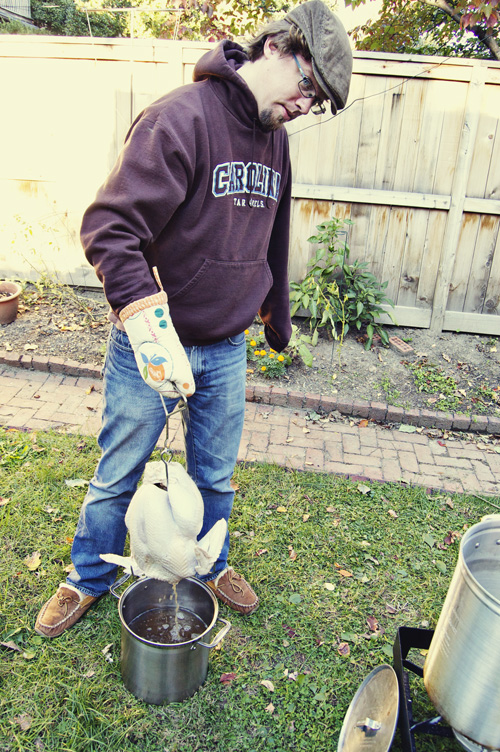 Alton Brown has never lead us astray, and this turkey was no different.  His recommendation, to prevent the thing where the oil gets all furious when you put the turkey in, is to lower the temperature to around 230, add the turkey, add more oil if necessary, and then raise the temperature.  It worked like a gem.  This turkey was incredible.  I apologize in advance for the gratuitous photographs. I promise you, this is about 1/3 of the amount that I took. 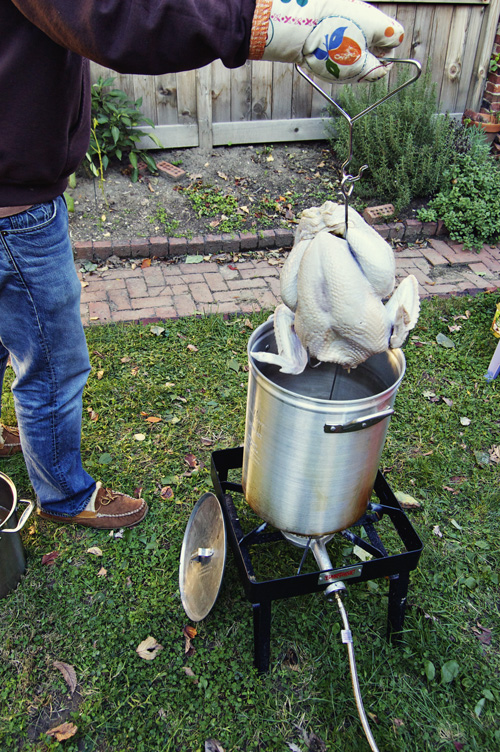 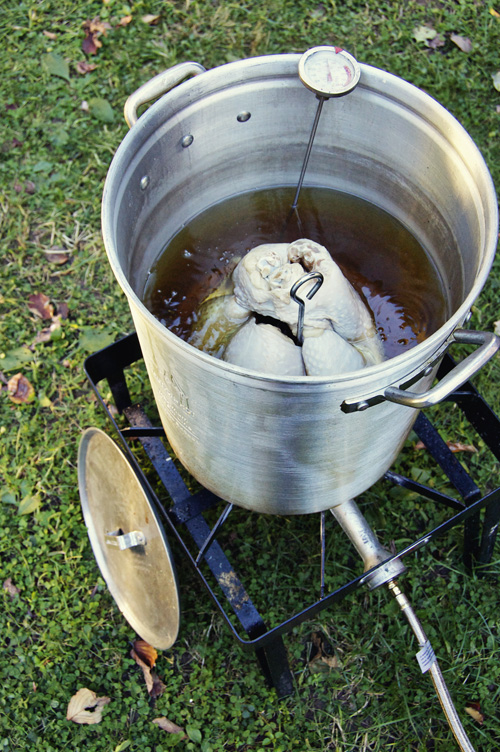 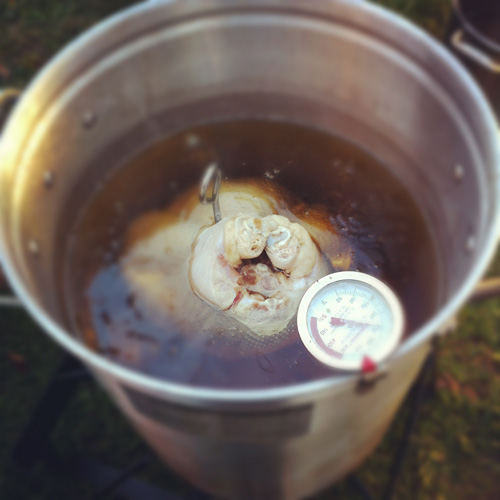 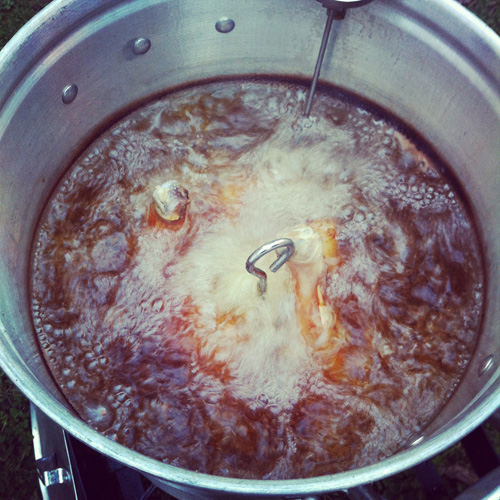 Later, there was the bubbling that says “I’m going to be delicious!” 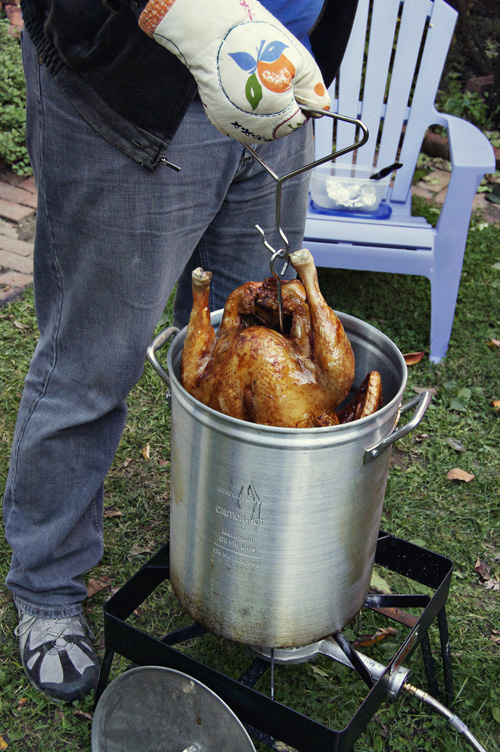 The most delicious turkey I have ever had. 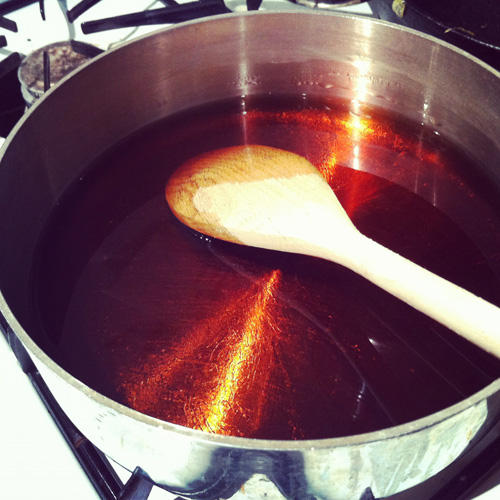 The bourbon-maple glaze.  And, below, our friend Chris holding up the back of my “studio” so it wouldn’t blow over in the wind.  Also, I think he was trying to figure out a way to steal the turkey without anyone noticing. 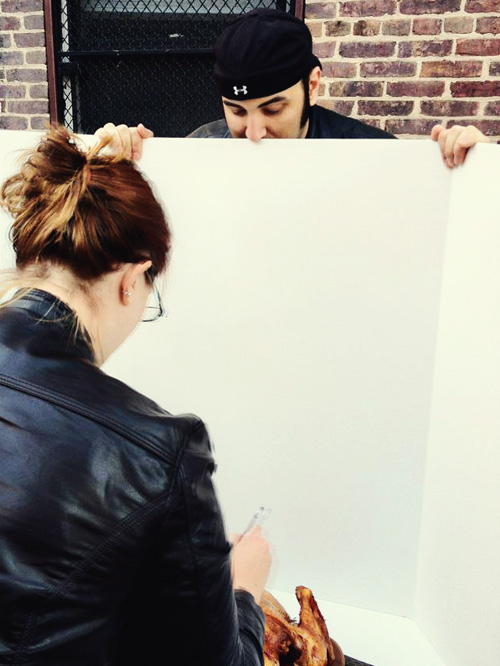 To fry a turkey, you need a large burner, a pot meant for turkey frying (you can get them cheap at any home improvement store), oil to fill your pot, and an oil thermometer.  If you’re not frying, this glaze would still be delicious on a roasted turkey, just apply it before, during, and after roasting.

To begin, heat your oil to around 230.  Take your turkey out of the brine, and attach it to the hook.  Lower it, slowly, into the oil.  If necessary, add more oil so that the turkey is covered.  Raise the temperature to 375.  Cook for 2-3 minutes per pound, or until golden brown.  We cooked out 12 pound turkey for 31 minutes and it was perfect.

About 10 minutes before your turkey is ready to come out of the oil, combine 2 1/2 cups maple syrup and 1 cup bourbon.  Simmer, stirring together.

When your turkey is ready, lift it out of the oil and allow it to drain.  Place it on a platter and carefully remove the hook.  Immediately cover in glaze.  For the next 30-40 minutes (or an hour if you’re very patient), glaze every 10 minutes as the turkey cools and its juices redistribute.

At the request of the group I left the glaze on the table so people could pour more on their turkey.  It was pretty delicious and totally addictive.