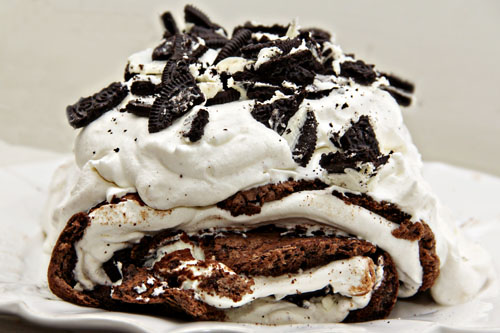 You would be surprised how many recipes come from late night conversations with Dan wherein I try to convince him that something exists/I’m right/something is awesome. One night this week he was in an impressively bad mood and to try and shock him out of it I pulled out my secret weapon- complete silliness. I was trying to explain to him what a cake roll was and when words failed me I used my arms (and sound effects) to mimic cake rolling up over and over again. Eventually, he broke. I was triumphant– his grumpiness had faded to laughter. Unfortunately the one side effect was that he now very much wanted a cake roll. 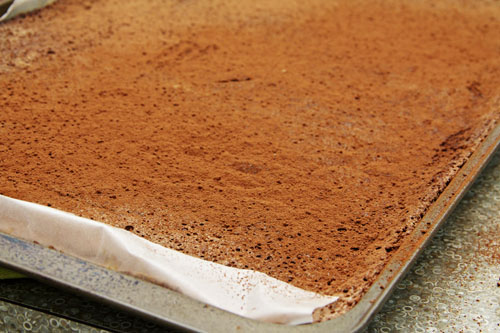 Thankfully we had a derby party to attend this weekend which meant that I had a perfect excuse to make one. I bounced around ideas for a while before deciding that I wanted to make a cookies & cream cake roll- chocolate cake, whipped cream icing, crushed chocolate sandwich cookies. And while the process of making the cake was a little more infuriating than I would have hoped, it turned out wonderfully. 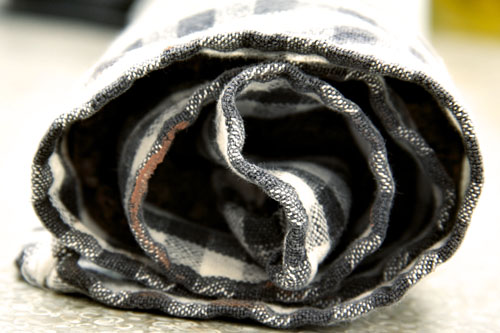 After a few hours the cake and whipped cream sort of disintegrated into each other forming a whole new kind of dessert- exactly the kind I love. I’m not really one for cake but I could eat whipped cream with a spoon, which means this was totally the dessert for me. Dan also seemed to love it, so mission accomplished. Though the next time he’s grumpy I may try to break him out of it with something that involves less painstaking kitchen effort from me. 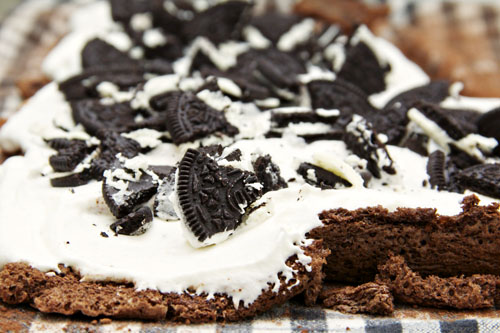 Melt chocolate in water until mostly melted. Stir together and set aside to cool.

Preheat oven to 350. Beat egg yolks, slowly adding sugar until the yolks are light in color and ribbon like. Stir the chocolate into the egg yolks, 1/4 at a time. Set aside

Remove damp towels and sift half of cocoa over the cake. Cover with large tea towel and invert. Carefully remove the wax paper. Sift remaining cocoa over the cake. Use the towel to roll the cake up. Let sit, rolled, until the cake has cooled (approximately 10 minutes). While it is cooling, whip whipped cream, vanilla, and sugar until it holds stiff peaks.

Unroll the cake and spread whipped cream generously, reserving 1/3. Crumble 3/4 of the cookies over the whipped cream. Using the towel to guide the cake, roll it onto itself, until it is completely rolled. Transfer onto a plate. Top with remaining whipped cream and crushed cookies. Chill and serve.