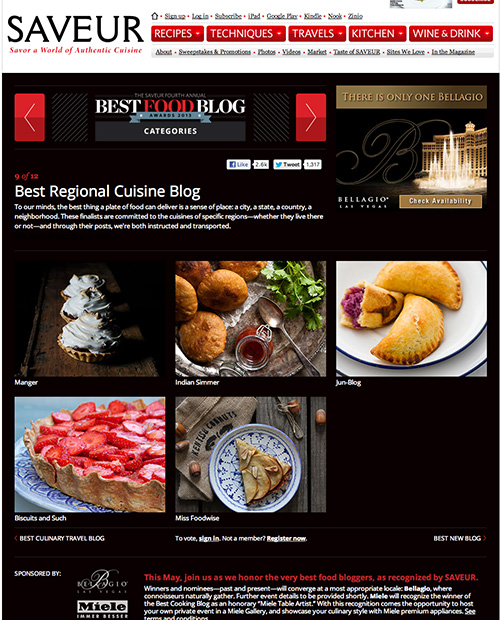 When you start a blog it’s only natural that you look to other blogs around you, amazing ones, to model yourself after. Actually that’s true of everything in life, not just blogs. You look for inspiration in the world and incorporate pieces of what inspires you into your own life. And for the past 4 years (almost 5!) as I’ve been building Biscuits and Such and looking to blogs that inspired me I’ve taken note of what blogs were winning what awards and thought to myself- that is the goal. You’ll know you’ve made it when you’re there. And I’m really thrilled and overwhelmed and humbled to say that I found out yesterday that I achieved one of those inspiration milestones. I’ve been nominated for the Saveur Magazine 2013 Best Food Blog Award in the “Best Regional Cuisine Blog” category. I’m up against four amazing blogs from all over the world and part of a cast of a few dozen fantastic finalists. I am so excited and proud and amazed I can’t even begin to express it.

Saveur looked at all the blogs nominated (and thanks to whomever nominated me, that was an exciting surprise!) and chose finalists based on their entire 2012 archive. What I’m saying is that I can only assume I made it this far because of that pan we lit on fire. A vote for me is a vote for cast iron. Voting goes until next Friday, April 19th, and can be done on Saveur’s website, saveur.com. You have to register to vote in order to prevent fraud (like that time I was in a recipe contest many years ago and my mom created a bunch of fake email addresses to vote for me), and can vote once in each category. It’s a huge honor to be a finalist and winning would be, well, unbelievable.