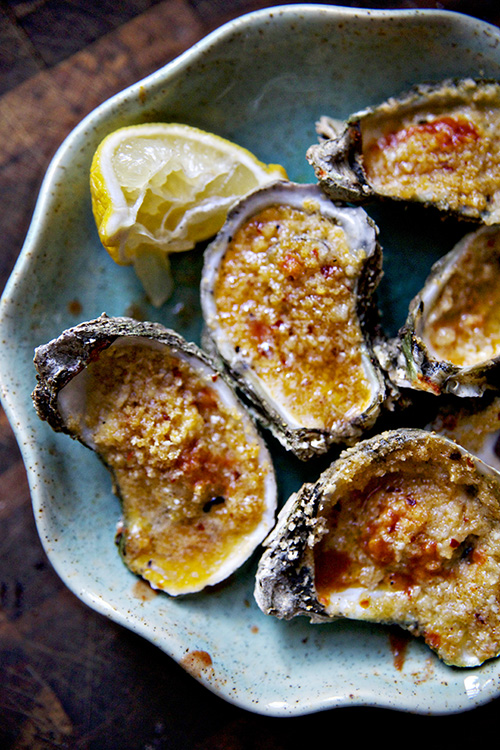 One of my favorite things about being a teacher is that I often hear the phrase “I am so lucky because…” My students count themselves lucky because of special trips, new toys, exciting things they get to eat, upcoming playdates… you name it. If it’s impressive to a preschooler I’ve probably heard about how lucky they are because it exists. I love that they are constantly tallying how grateful and fortunate they are, and it inspires me to count the ways in which I am fortunate. For instance, I am lucky because this blog has afforded me the opportunity to meet incredible people, travel to interesting places, and eat delicious and amazing meals. One of those such trips was my recent visit to Avery Island, Louisiana. 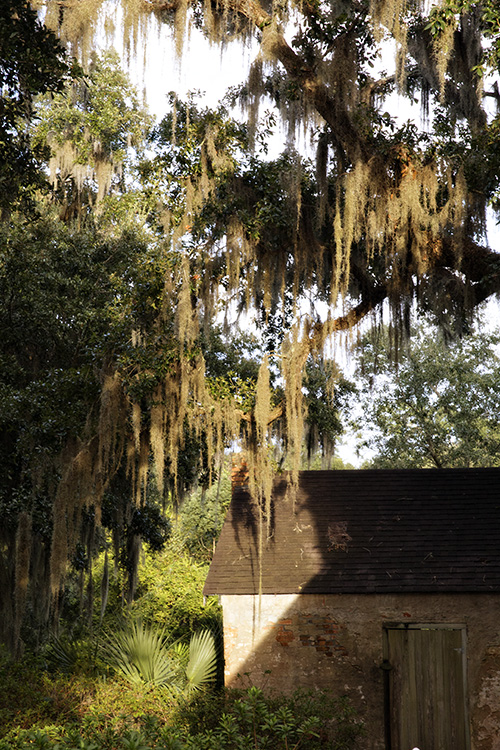 Avery Island is the historic home of the McIlhenny family, the creators of Tabasco. Invented by Edmund McIlhenny in the late 1860’s, the McIlhenny family has built a hot sauce empire on three ingredients- tabasco peppers, Avery Island salt, and vinegar. The recipe today is identical to the recipe penned by Edmund himself, and the making of the sauce remains a truly family business. This October Tabasco flew a handful of food bloggers and recipe developers to Avery Island to learn, eat, drink, and share as a part of its annual Tabasco Tastemakers event. I was honored to be one of those bloggers that made the trip down south. 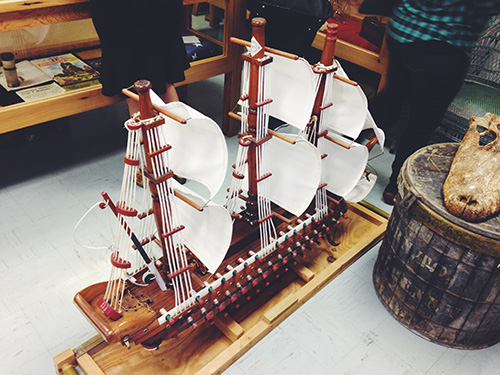 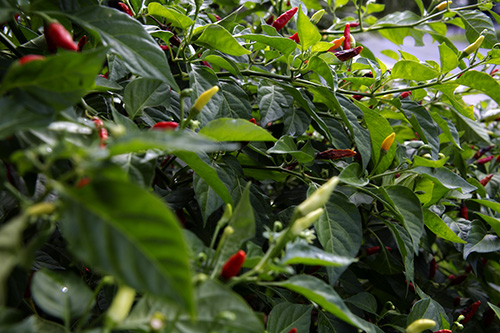 Upon our arrival on Avery Island we were brought first to the archives, where Tabasco historian Shane Bernard gave us the abbreviated history of Tabasco and showed us a peek at some of the collection he’s amassed in his nearly 15 years of service. Afterwards we were whisked up to the Marsh House, the historic Avery and McIlhenny family home. It was here where the Avery family fled during the Civil War and it was here where Edmund first concocted his hot sauce. While a fair amount of the extended McIlhenny family still lives on Avery Island, the Marsh House is now used for private family events and hosting guests such as ourselves. After unpacking, getting ourselves together, and exploring the grounds, we congregated in the main living room to meet Tony Simmons, his wife Jeanie, and a half dozen or so family members. I was taken aback when, upon entering, Tony greeted many of the food bloggers by name. This seemed to be a theme that was consistent throughout the week– everyone we met was sincere, personable, and so incredibly kind. Traits that, in my book, are as good as gold. 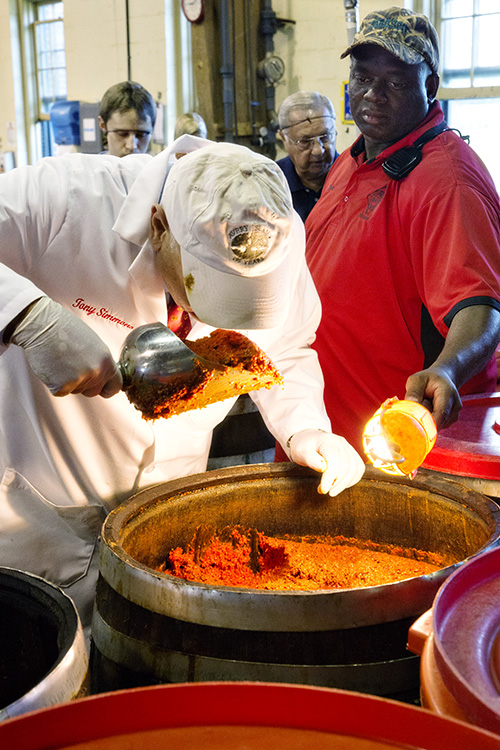 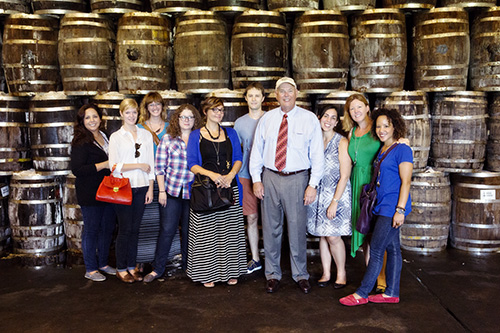 This year’s Tabasco Tastemakers were, from left: Ericka, Amber, myself, Tami, Tracy, Taylor, (that’s Tony Simmons of Tabasco in the tie), Ana Sofia, Natalie, and Bren. This whole party was put together by the incredible ladies at Hunter PR, and they deserve a big kudos.

Our first night on the island was drinks and a seafood boil, a time honored tradition throughout the South (and although my Maryland friends would be appalled at the boiling of crabs, it was delicious). The next day it was time to don our hairnets and learn about the making of the famous hot sauce, from seed to bottle. We visited the greenhouse where the pepper plants are started, all from the same seed family that Edmund procured years and years ago (origins unknown). We watched as Tony checked 100 barrels of mash (tabasco peppers + Avery Island salt), something that is done each morning. We saw where the mash is fermented in oak bourbon barrels for 3-8 years. We watched as the mash was combined with vinegar to make the final hot sauce. And we watched the sauce being dispensed into thousands of bottles each minute in the bottling factory. 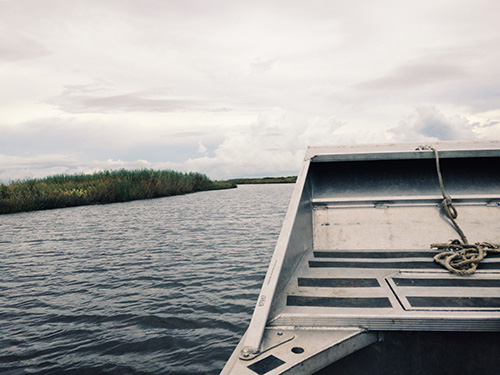 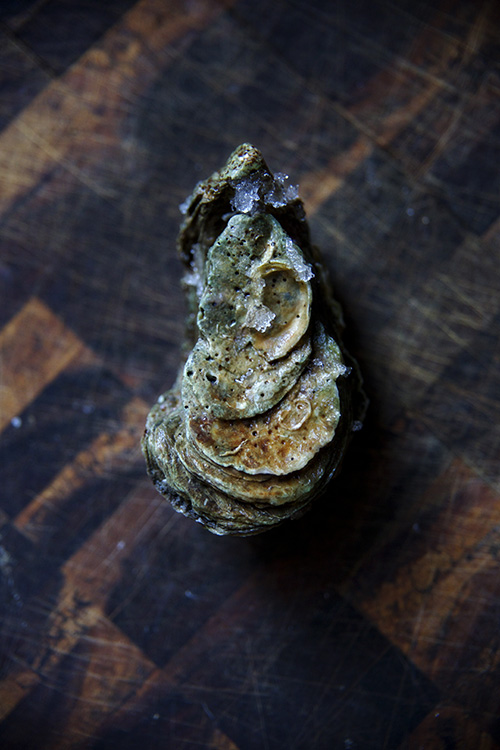 After the big tour we were treated to a gumbo demonstration by Chef Sue Zemenick of Gautreau’s Restaurant. It was our second gumbo of the week, our first being the many times award winning gumbo of Avery Island’s Chef Nelson. Chef Sue and Nelson sparred as she demonstrated the perfect roux and whipped up a batch of her gumbo de herbes. Later that evening she served the gumbo topped with a deviled quail egg, followed by five more courses of mind blowingly delicious foods, all featuring Tabasco (including the dessert, which I was thoroughly impressed by).  In between Chef Sue’s demonstration and dinner, however, we had a bit of time to explore the bayous around Avery Island in my now preferred means of transportation- airboat. It may be loud, but it is fun as all get out. 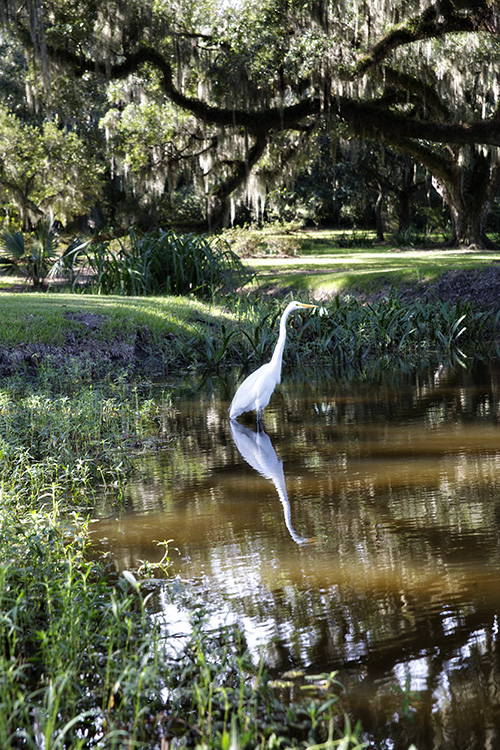 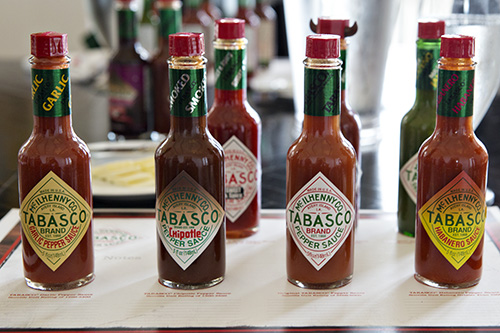 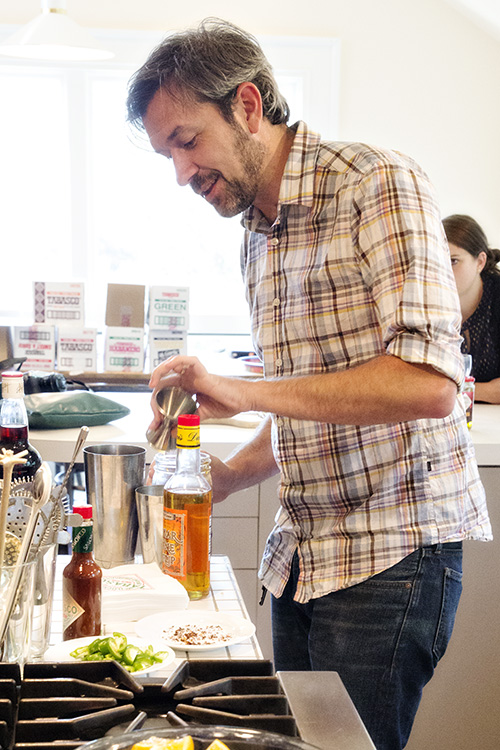 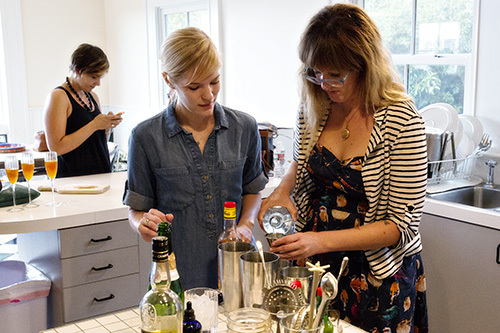 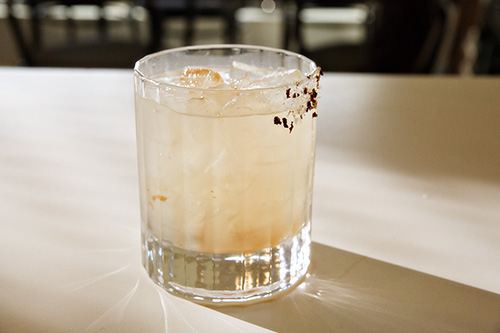 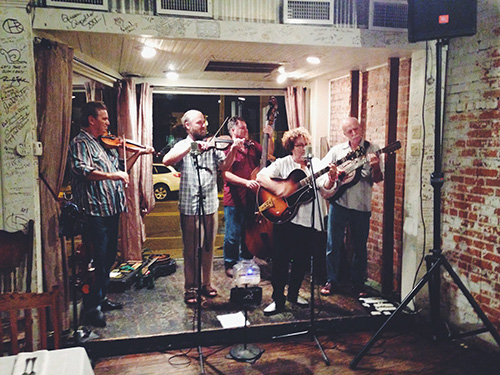 Our third day on Avery Island was probably my favorite. This day began with the grand tour of Avery Island, as given by Dave, who should probably be their mascot. Dave worked for McIlhenny Company for decades, was raised on Avery Island, and even though he retired years ago continues to help the McIlhenny family sell the Tabasco charm. He reminded me of my grandpa, if a little less Irish and a little more Cajun. Dave showed us around the island, driving us past everything from the salt mines to Tony Simmon’s house (shhhhhhhh), and ending in Bird City, an egret reserve founded by E.A. McIlhenny as a way to help save the snowy egret population. Afterwards we headed back to Marsh House for a hot sauce tasting with Tony and Charlie Cheng, the scientist and flavor developer behind many of Tabasco’s sauces. It was fascinating to hear the CEO and lead recipe developer talk candidly about what had worked, what had failed, what needs tweaking, and what is on the docket. For lunch we were treated to Bon Creole in New Iberia for boudain and bowfin caviar, a Louisiana specialty. Afterwards we headed into back to the Marsh House kitchen for a cocktail and mixology demonstration by Kirk Espinotal, a man who mixes drinks with more flair than anyone I’ve ever seen. Kirk made three cocktails with us (it was a very interactive workshop, which was highly appreciated), my favorite of which was The Awakening, a twist on the Pimm’s Cup and a Tequila Sunrise. That night for dinner we headed in to town to Cafe Des Amis, which was a treat particularly because it was the first opportunity that week for a big fat salad. 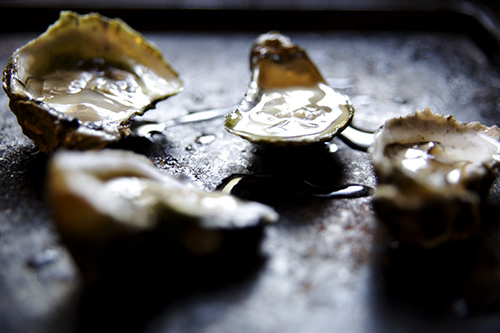 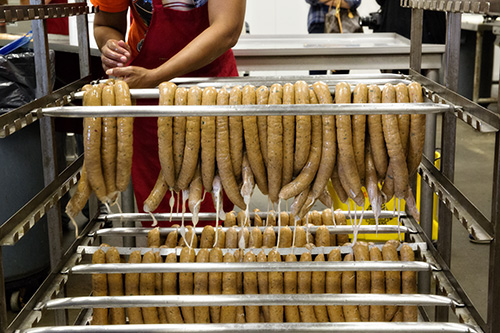 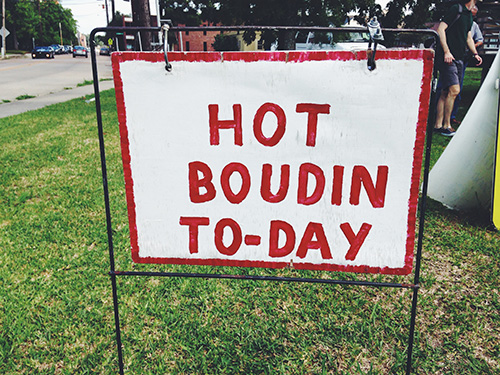 The next morning, much to my dismay, it was time to head back to reality. After packing our bags (and a final breakfast with Stanley) we headed into town for one last trip- a visit to Legnon’s Boucherie to watch them make their famous boudin. Boudin, which my brother in law Bradley is kind enough to bring to every holiday gathering, is a mixture of cooked sausage, rice, vegetables, and spices that is stuffed in sausage casings and served hot. After watching in awe as they worked through dozens of links of sausage we headed into a back room to watch them make cracklin, something I have long loved but never seen made. Having acquired that experience, I’m pretty sure I’m okay leaving this one to the experts. 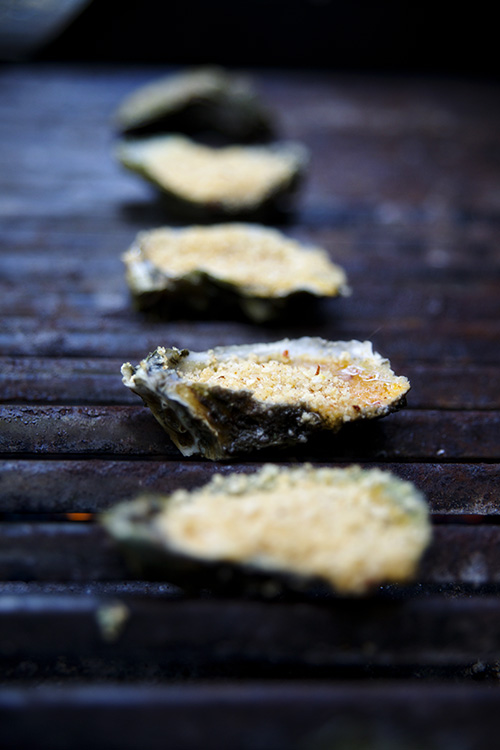 After sweet goodbyes to new friends we split into small groups based on travel arrangements and headed to the airport. Even now, weeks later, a smile comes to my face when I think about this trip. It’s rare to have an experience that so perfectly blends business and pleasure, and I continue to be impressed that Tabasco, Hunter PR, and the McIlhenny Company were able to put together such a memorable week. I came away from this not only a lifelong Tabasco customer (I already was one, so this is just a bonus), but thoroughly blown away by how the McIlhenny Company operates. I was afforded much more than a glimpse of the company, and I am so grateful that the family opened themselves up to us in such a unique way. It was absolutely a trip of a lifetime. 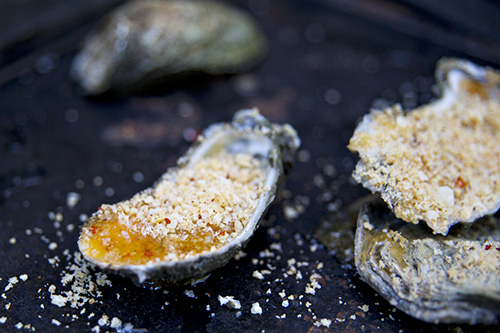 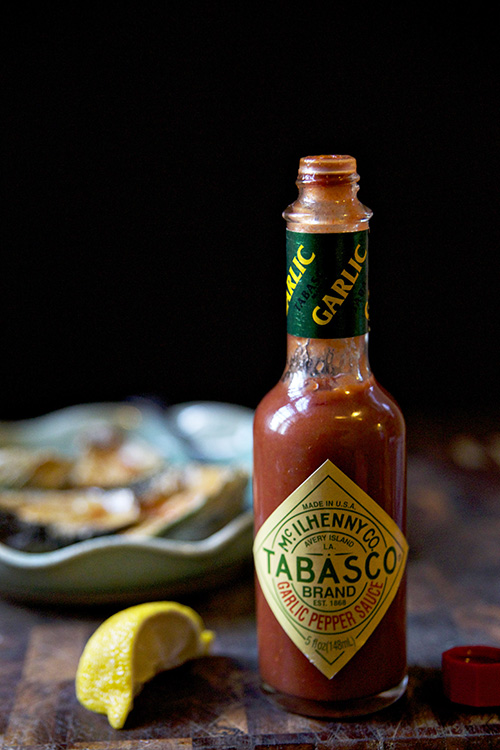 This past week we were invited to no less than five oyster related events, which to me signals the beginning of the holiday season. And while I firmly believe that in these parts oysters are best in the coldest months, I couldn’t resist the opportunity to try my hand at one of the recipes I enjoyed on Avery Island. Nelson’s charbroiled oysters were spicy, buttery, and fantastic, something I’ve been dreaming about since I returned. My best imitation of his masterpiece involved butter (of course), parmesan, white cheddar, garlic, French bread, chipotle, and Tabasco Garlic Pepper Sauce. They were exactly what I was hoping for, a recipe that I’ll be rolling out frequently from now until the waters are warm again. 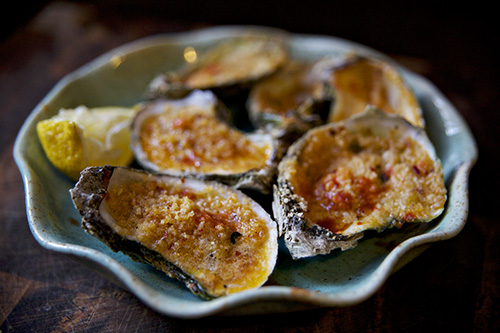 This post is sponsored by Tabasco. The words, thoughts, and opinions are my own. Don’t miss our first post featuring Tabasco sauce- Honey Chipotle Wings.

In a skillet melt butter. Roughly chop garlic and add to pan, along with hot sauce. Simmer over low heat.

In a food processor combine bread, cheese, and spices. Pulse until you have created bread crumbs.

Using a shucking knife, halve oysters. Heat grill to 400F and lay oysters on a baking sheet or plate. Spoon a tbsp of the butter mixture into each oyster shell. Top with a tbsp of the breadcrumb mixture. Transfer shells to the grill and charbroil with the lid closed for 5-7 minutes or until the oysters are bubbling. Drizzle with lemon juice and garlic pepper sauce. Serve hot on the half shell. 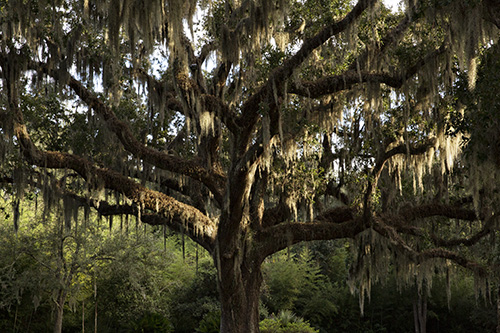