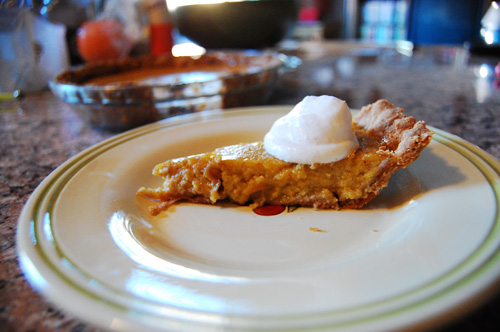 Pumpkin pie was one of the first things that I learned how to make.  Using canned pureed pumpkin, my grandmother made it frequently throughout the fall and winter, along with fresh whipped cream to accompany it.  I love pumpkin pie, and always have, so it was a recipe that I dedicated myself to mastering. 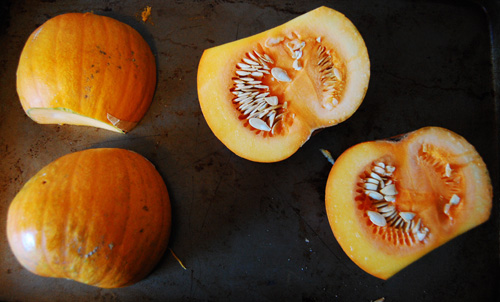 When my grandmother died a few years ago, it became my responsibility to keep making the recipes that my father didn’t know how to make.  The first time he had my pumpkin pie, he looked at me and exclaimed “Bobbie taught you how to make it!”  Now I was in a predicament.  You see, my grandmother’s recipe was loosely based on the recipe given on the side of the Libby’s can.  My father wouldn’t believe me, so finally I conceded that my grandmother had made the recipe her own, which was not entirely a lie. 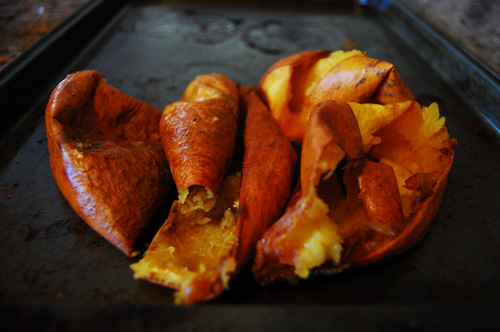 Now I’ve been making that Libby’s variation for years, and there’s a special place in my heart.  But this fall, with a year-round farmer’s market mere blocks from my house, it seemed wasteful not to use a real pumpkin.  So, this morning, I set out to make a completely from scratch pumpkin pie, based on Rebecca Wood‘s recipe. 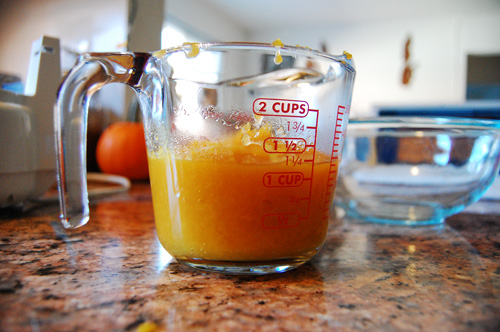 After an embarrassing moment at the farmers market when, in front of the merchant, I wrongly identified a squash as a pumpkin, I set off.  The recipe, which tastes better than I imagined, had a few issues.  For one, the dough.  Now, I always tell myself to keep an open mind about dough, because there is that chance that I could happen upon a great recipe.  This was not a great recipe.  It was too hard and fell apart all over the place when I tried to roll it out.  I ended up piecing it together in the pie dish, which is not ideal.  To it’s credit, it did taste fine.  But what crust doesn’t taste fine with all the spiced goodness that is pumpkin pie on top of it? 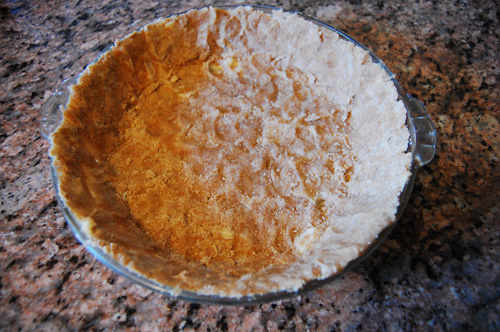 Also, the recipe calls for one sugar pumpkin to yield two cups of puree.  Now, I bought two pumpkins that were labeled “p” for pie-worthy.  They were normal sized smallish pumpkins, but the puree of the two barely made a cup and a quarter.  So, when you’re making this, try and find bigger smallish pumpkins, or buy three. 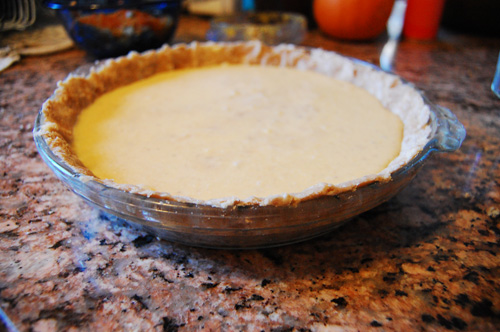 Other than that, and the fact that it was not quite as orange as I expected it to be (blame my shortage of puree), it was a yummy recipe, one that I will make again (with better dough). 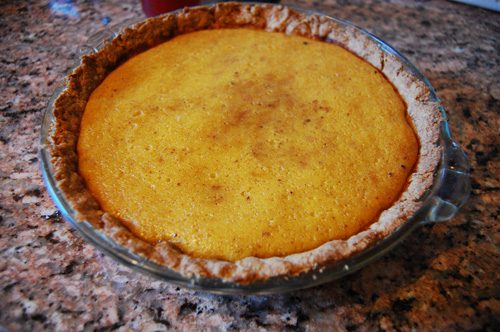 Start with the dough, since it will need to refrigerate.  Mix together your flour, spices and salt.  Knead in sliced butter until the texture is like corn meal.  Slowly drizzle in water, and with your hands or a wooden spoon, mix together until a dough forms.  Flatten into a disc, cover in plastic wrap, and refrigerate for one hour.

Preheat your oven to 350*.  Slice the pumpkins in half, gut, and bake, shell side up for one hour.  Let cool a little, and then scrape the pulp out of the shell.  Puree in a blender or food processor, until smooth.  Put aside.  In a medium mixing bowl, beat eggs.  Add in puree and heavy cream, using a whisk to incorporate.  Add spices, and stir until totally mixed.

Raise temperature to 425*.  Press dough into pie shell, and pour pumpkin mix into shell.  Bake for fifteen minutes at 425*, and then for forty minutes at 350*.

Pour cream into medium sized bowl.  Using the whisk attachment on your hand mixer, start mixing at a medium speed.  When the cream starts to thicken, add the sugar, vanilla, and spices.  Continue to whip until soft peaks form.  Plop a dollop on top of your pie and serve.

*When pumpkins are out of season (December-August), there is really no shame in substituting the homemade puree with a can of store bought pumpkin puree, which is (so it claims) 100% pure pumpkin