I would like to preface any and all interactions that you and I have with pecans by mentioning that I pronounce them the phonetic way, as is traditional in the south.  So when you’re reading these recipes and your eyes skim over this understated word, think “pea-can.”  Any other pronunciation is just silly.

Speaking of pronunciations.  So Dan is from Pennsylvania, a place where there are a’plenty of towns and rivers and bridges with Native American names (or Western interpretations of Native American words) that I just cannot wrap my tongue around.  I’m not insinuating it’s a southern thing.  I was told by a friend a few years back that it’s because I was raised to read words phonetically, as opposed to blending the words, sounding out each letter.  Take for instance, the Washington State town of Puyallup.  Now when I see the word Puyallup, I break it down into what ends up coming out of my mouth as “Poo-y’all-up.”  I have been informed that this is not the way they in Puyallup prefer to have it pronounced.  No, it is actually something that sounds like “puh-wallup.”  I digress. 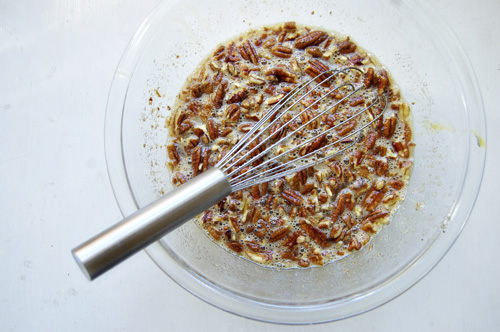 Pecan pie is gloriously simple to make.  For a pie with such a complex taste, it almost feels like cheating.  There is a small amount of whisking, a little measuring, some crunching, and a lot of salivating as it bakes, but really, there’s nothing to it.  I like to make pecan pie with a little brown sugar in the crust.  As well as a little cinnamon.  I think that a slightly cinnamon crust on pies like pecan and chocolate chess that don’t have cinnamon in the filling give it a little extra oomph.  Also, if you wanted to add a bit of chocolate to this, make it something like an inverse chocolate chess pie, it’d be delicious. 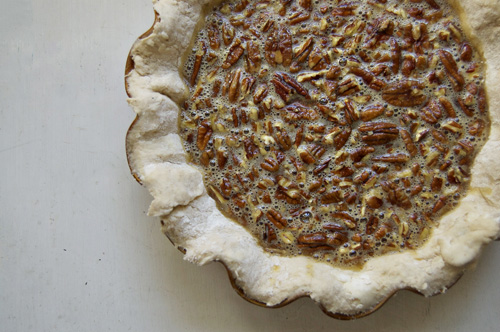 Melt butter and set aside to cool.  Beat eggs, then add sugar, syrup, and butter.  Whisk together.  Incorporate pecans.

(you feel like a con artist, don’t you?  maybe like it’s semi-homemade?  well set aside the guilt sandra lee, this is 100% you and you don’t have to let on how easy it was)