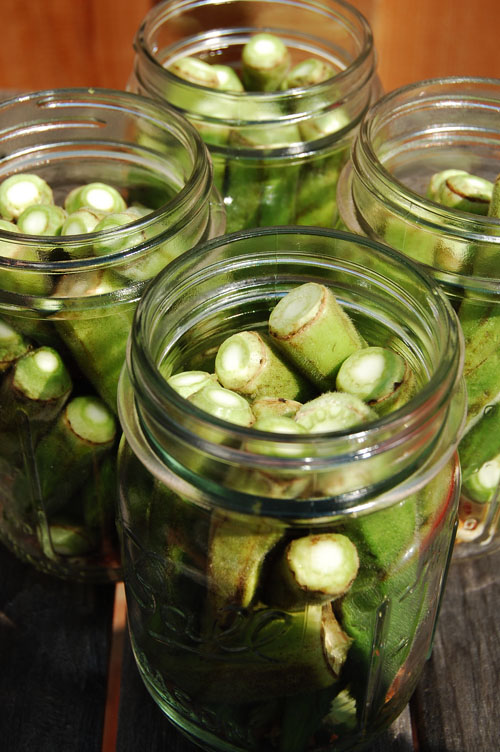 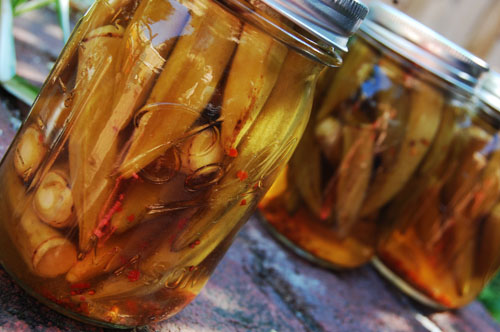 Okra is one of those vegetables that people feel passionately about.  Either they love it, with a dedicated, all consuming love, or they hate it.  Dan and I fall into opposite ends of the okra spectrum.  He doesn’t want it within ten feet of his plate (or at least no closer than my side of the couch) and I can’t get enough of it.  I want it fried, I want it stewed, and always (always) I wanted it pickled.  When I was growing up I used to love to settle into the the front porch with a good book and a jar of pickled okra.  Nothing made me happier than the crunchy outside, the spicy vinegary flavor, and the unexpected pop of the seeds beneath your teeth.  In my lifetime I have consumed an embarrassing amount of pickled okra, one jar at a time.  And I don’t regret a bite. 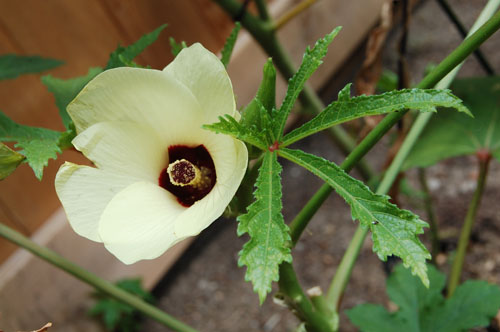 This year we grew okra in the back yard, which was a lot of fun.  About a month into the plant’s existence what looked like a seed pod (the part of the okra you eat) appeared on the plant.  Great news, except I had never seen a flower.  I consulted the interwebz and learned that the okra flower blooms for less than a day, so I just missed it.  Afterwards I always felt a little rush of excitement when I caught the okra flowering, like I was seeing something secret.  Because I’m a five year old, obviously.  And because growing plants is a magical experience. 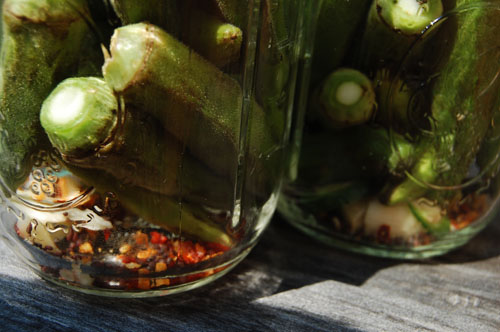 This is a traditional pickled okra recipe, similar to what any of your southern grandmothers make or what I spent my childhood eating on the front porch.  Heavily vinegar based, like any pickle, and spicy, this is one of my favorite snacks.  And definitely my favorite way to eat okra.  In other news, this weekend I’ll be submitting a pie into the Cville Pie Fest in Charlottesville, VA.  It’s a pie that is brand spankin’ new and might fail really horribly.  In front of a lot of people.  Come by and watch the fun! 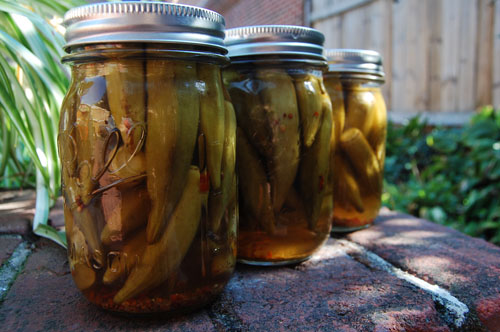 Clean the okra and cut off the stems.  In each sterilized jar, place two cloves of garlic, one slice of jalapeño, 1 tbsp red pepper flakes, 1 tsp mustard seeds, 1 tsp cumin seeds, and as much okra as you can pack in tightly.  Ladle vinegar mixture into each jar, leaving about 1/4″ headspace.  Wipe the rim down, place a clean lid on each jar, and screw band on tightly.  Process in your large pot (with rack) for 10 minutes.  Remove from water, give the band another squeeze, and allow to sit.  Once the jars have sealed (you’ll know if you can’t pop the lid up and down), set them in a cool, dark place for at least two weeks.  They will stay for up to a year.