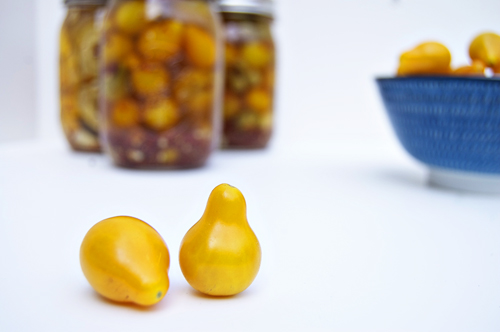 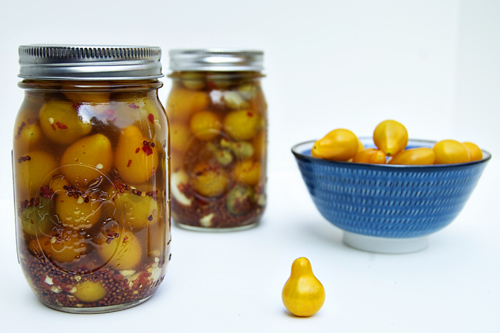 I love pickles. Pickled okra, pickled cucumber, pickled onions, pickled squash, pickled tomatoes, pickled peppers, pickled you name it. Year round they are my go to hit-the-spot salty treat. I can’t imagine a world without pickles. This summer I planted five or six yellow pear tomato plants. Unfortunately, two of the ones planted in our backyard garden have already died because of the record high temperatures and others are looking pathetic. At the community garden, however, it’s a different story. Two have merged to form a giant mega tomato bush. It’s at least 5 feet in diameter and has overtaken three or four other plants. It has literally hundreds of tomatoes growing on it and I could not be happier. It’s my mega-mater. I’ve named him Ernest. 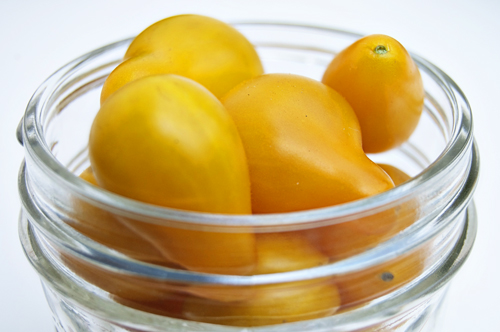 Since we’re drowning in tiny yellow tomatoes I decided do some small batch pickling. Two or three jars at a time I’m throwing these suckers in a spicy vinegar bath to stew until sometime midwinter when I’m sick of potatoes and all I want in my life is a burst of tomatoey goodness.

*If you’re a Baltimorean and around this weekend you should come see Fluid Movement perform at Patterson Park. I’m in the Boom Boom Room, come find me after the show!

Enough tomatoes to fill all your jars

Begin by sterilizing your jars. About an hour before you want to can fill two large pots with water. I recommend that you have some canning equipment, at the very least a large pot with a rack and a pair of tongs. You’ll need a separate pot for sterilizing your jars and lids. Bring both pots of water to a boil. In one pot (the one without a lid) place your jars and the lids (not the screw bands). Allow them to boil for at least 10 minutes, but keep them in the pot until right before you fill them.

Rinse the tomatoes. In each sterilized jar, place two cloves of garlic, one slice of jalapeño, 1 tbsp red pepper flakes, 1 tsp mustard seeds, 1 tsp cumin seeds, and as many tomatoes as you can pack in tightly. Ladle vinegar mixture into each jar, leaving about 1/4″ headspace. Wipe the rim down, place a clean lid on each jar, and screw band on tightly. Process in your large pot (with rack) for 10 minutes. Remove from water, give the band another squeeze, and allow to sit. Once the jars have sealed (you’ll know if you can’t pop the lid up and down), set them in a cool, dark place for at least two weeks. They will stay for up to a year.

**As with any preservation process, there are risks. If you notice anything abnormal, discard the pickles immediately. Botulism is no fun.**