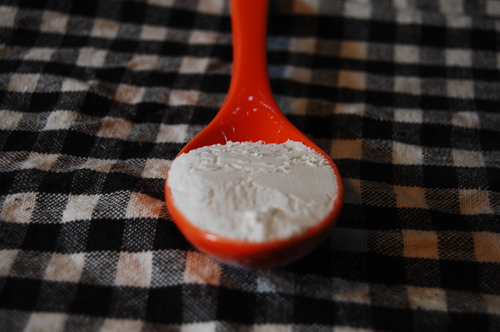 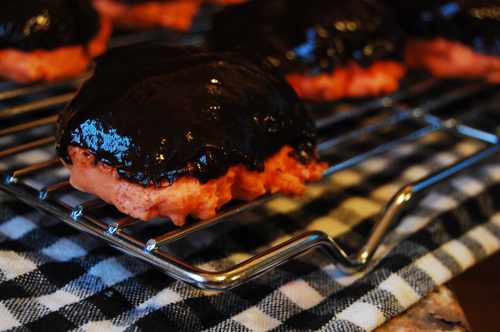 There are two reasons I prefer to grocery shop by myself.  The first is that Dan has a bad case of parking lot rage.  He can’t even be passenger in a car that’s in a crowded parking lot without getting all cranky.  The second reason is that he compulsively sneaks treats into the shopping cart when he thinks I’m not paying attention.  When we first started living together, the closest grocery store carried a cookie that is unique to Maryland, more specifically Baltimore.

Every week as I unpacked our grocery bags, I was (un)surprised to find a box of these cookies, Berger cookies.  Berger cookies are a Baltimore tradition almost 150 years old.  It’s a cakey white cookie (not unlike a black & white cookie) topped with a thick, rich chocolate icing.  These cookies are well known throughout Maryland and well loved by my husband.  I would pull out the box, glance over at him, and I always got the same sheepish look in response. 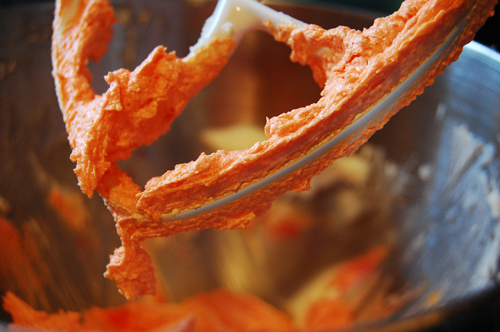 Dan’s favorite holiday is Halloween, so I try and go above and beyond to make it special.  He doesn’t really like barhopping, so we do a whole day in, usually with festive drinks, an appetizer based dinner, lots of queso, and scary movies.  This year’s roster includes Jesus Christ Vampire Hunter, fuzzy navels, and a halloween edition of the Berger cookie.  I added red and yellow food coloring to the dough so when it is paired with the rich chocolate icing it is perfect for this most ghoulish of holidays. 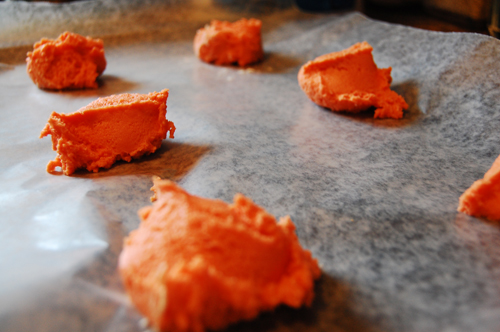 Cream butter on medium high until fluffy.  Add in salt, vanilla, b. powder, and continue beating.  Beat in sugar.  While beating, add in food coloring, alternating red and yellow, until you get the desired color orange.  Add in eggs, one at a time.  Beat in flour and milk, alternating, beginning and ending with flour.

Heat oven to 400.  Bake for 11 minutes on a baking sheet covered with wax paper.  Let cookies cool on pan for 5 minutes, then transfer to a wire rack.

When cookies are cooled, dip in icing and place on a rack so the icing can set. 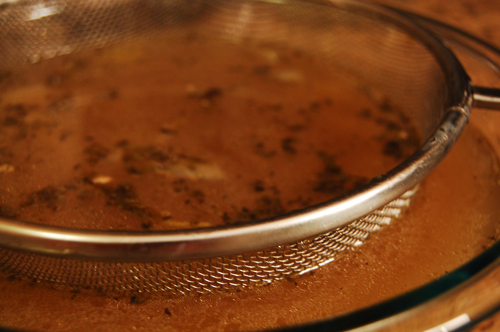 I promised you a really long time ago that I would share my chicken stock recipe, but then I never did.  Because I’m a jerk.  Instead I just stuck my chicken carcass in the freezer and forgot about it.  Then, this weekend, when I was putting together my list of recipes for November for both b&s and iVillage (did I mention that starting November 9th I’ll be writing a weekly food column for iVillage?), and I realized that it was finally perfect timing to make chicken stock and share the recipe. 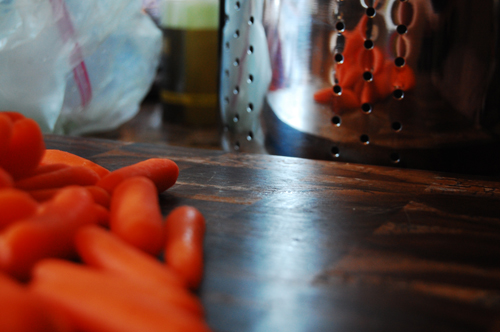 Chicken stock is really water that has been infused with the nutrients, flavor, and essence of chicken, vegetable, and spices.  You combine the spices and vegetables with chicken scraps, bones, and leftovers and simmer for 6-8 hours with water.  It’s a great way to repurpose left over chicken from fried, roasted, or broiled chicken.  The stock can then be used in soups, stews, braises, etc. 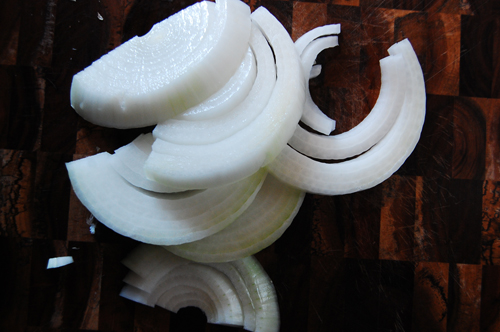 Why make it yourself, you may ask, when it’s only a few dollars at the grocery store?  Well, for a few reasons.  For one, you’re recycling your leftover chickens, and you can throw in whatever vegetable scraps you have.  Secondly, it’s better for you.  You can control the amount of salt, and there are no preservatives.  Also, you can make a lot in one sitting and freeze it.  Some people choose to freeze their stock in 10 little containers, but my freezer isn’t big enough for that, so I freeze it in 1/2 gallon batches. 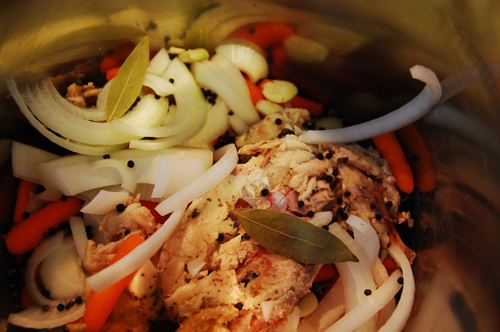 Another benefit is that if you’re making stock for one particular dish, you can flavor it so that it is as complimentary as possible.  For instance, when I made this stock I was going to use the first batch of it to braise short ribs.  I was braising the ribs in red wine with cremini mushrooms, with a flavor profile that included all spice, rosemary, and bay leaves.  So by including these ingredients in the stock, when I used the stock in the braise the flavors echoed beautifully. 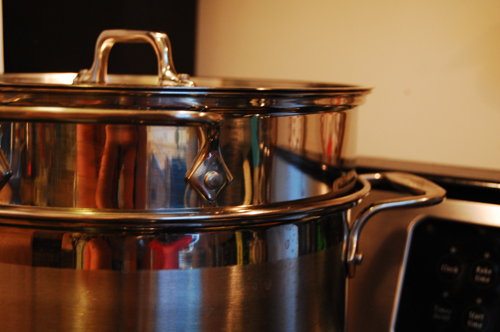 Combine everything but the water in a large stockpot.  Cover with the large steamer basket.  Pour water in, so that the ingredients are completely covered with water.

Bring to a boil.

Cover, lower temperature to a simmer, and cook 6-8 hours.  Every 30 minutes or so skim fat from the top, and add water as needed.  Make sure that vegetables and chicken stay covered completely.

Strain and freeze the stock for future use! 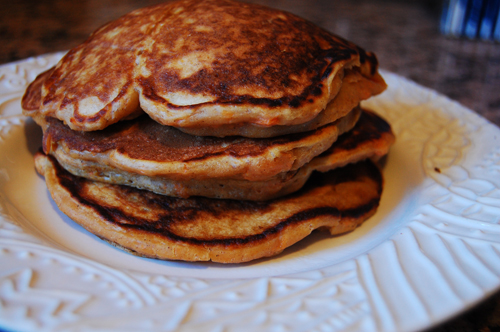 You know when it’s really late at night and you have a brilliant idea so you’re all NOTE TO SELF: REMEMBER THAT YOU WANT A UNICORN BIRTHDAY CAKE and then the next morning you’ve forgotten and along comes your birthday and no unicorn cake and you’re sad?  Or something along those lines?  I do that all the time.  Sometimes it’s ridiculous stuff that then leads me to have ridiculous dreams which then leads me to say ridiculous things to Dan when he tries to say goodbye to me in the morning and I’m still sleeping.  Like “don’t you know you can’t ride unicycles on the ceiling?”  Because you can’t.  Gravity.  You’d fall. 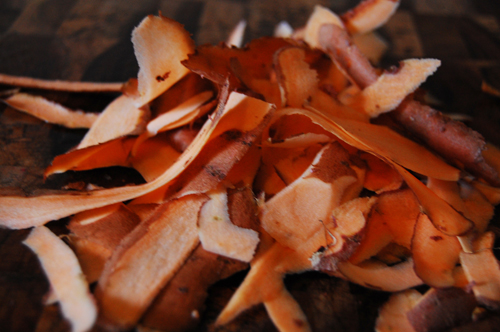 On Friday night my last thought was that I really wanted sweet potato pancakes and that we should eat brenner on Saturday night.  Because I love brenner and it’s that time of year where sweet potato pancakes are exactly what I’m craving.  But, alas, by Saturday morning it was gone.  Vamoose.  No sign of brenner.  Fast forward to later in the day when I was making the grocery list for the week and stuck on what I wanted to eat that night.  I was heavily considering throwing in the creative towel and making artisan quesadillas when my mind jumped from the shape of a quesadilla to PANCAKES.  And then I remembered, I wanted pancakes.  Mental high five, Elena. 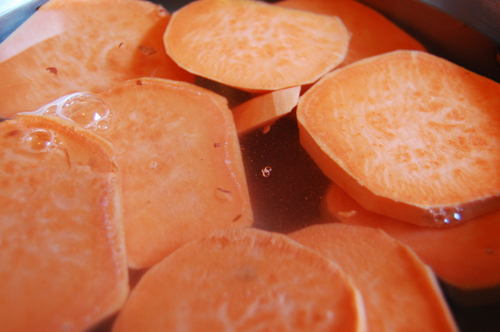 I downloaded this recipe last fall after watching that Rachel Ray show where she goes to a town and tries to eat for under a certain amount of money.  I don’t think it’s on the air anymore.  I don’t particularly like Rachel Ray, but she was in Asheville, North Carolina (one of my favorite places) and so I watched it.  And Rachel made a stop by the Tupelo Honey Cafe and ordered these pancakes that looked incredible.  So I downloaded the recipe and promised myself (and probably Dan) I’d make them immediately.  But I didn’t.  It’s now a year later and those pancakes have not shown their face in this apartment. 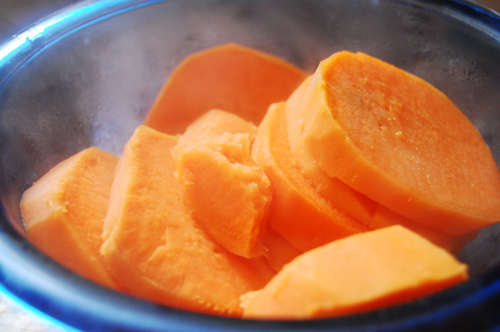 Part of the reason it has taken me so long to make these pancakes is that for a while, I lost my pancake touch.  When I was a kid, I made awesome pancakes.  Light, fluffy, crispy, delicious.  But all last year, every time I tried to make pancakes, they fell short.  Flat, greasy, burned, chewy, awful.  I read every pancake how-to I could get my hands on, I practiced and practiced, I just couldn’t get them right.  My batter wasn’t fluffy enough, my griddle was too hot or too cold, it just wasn’t working.  So when my craving for sweet potato pancakes hit me yesterday, so did my performance anxiety. 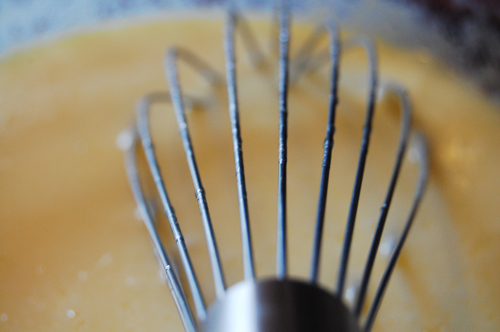 And amazingly they just… worked!  The first one sucked, but isn’t that a rule?  The first pancake rule?  The rest were perfect, totally delicious.  I’m not going to pretend to know why these were great and the ones I made last year were awful, I’m just chalking it up to luck.  And my advice to those of you in pancake peril?  Medium heat on your skillet (cast iron works best for me) and wait until you see the bubbles!  These are worth the angst, up there with my other genius late night ideas, like buying Cracker Barrel stock. 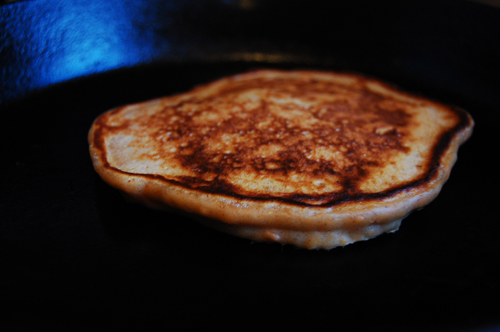 Combine all dry ingredients (except spices) in a large bowl.  In another bowl combine buttermilk, eggs, melted butter.  Add that to dry ingredients.  In a third bowl, mix honey, spices, and potato.  Add this to the pancake mixture.  Mix until incorporated but don’t over mix.  Let the batter stand at least 1 hour.

Heat your griddle (skillet) to medium heat.  Add the batter, and cook until bubbles appear (see photo above), flip, and then cook until golden brown on both sides.