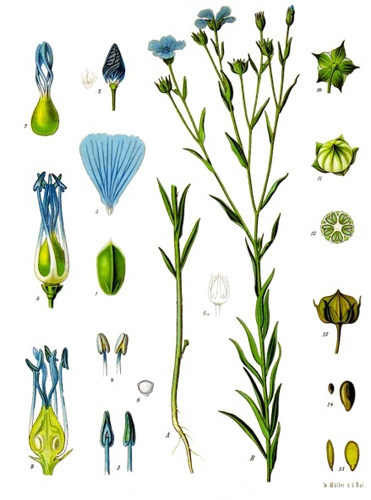 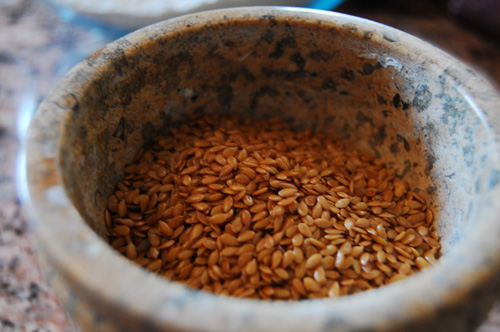 I’m the first person to stand up and protest when my favorite foods are butchered in the name of diets.  When I’m trying to be health-conscious, I opt to have a larger salad and a lean piece of meat.  I’d rather have a smaller piece of pie with no ice cream than a large piece of pie whose integrity has been degraded by whole wheat crusts or sugar substitutes.  There are certain foods, however, that I think work really well once they’ve been healthed-up. 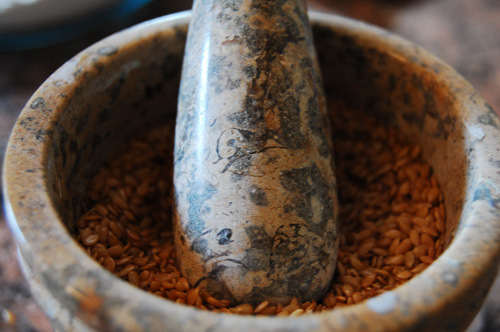 When Dan and I travel to visit people, we try and tailor the food we bring with us to their tastes.  I always try and remember who would prefer the banana cream pie and who would rather the pumpkin muffins.  When we’re going to be in a mixed crowd, we like to bring a variety of foods that all can enjoy, no matter their taste or health requirements.  This week we visited West Virginia (and parts of western Maryland) with Dan’s parents, his sister, her husband, and their daughter.  I brought my bourbon white peach pie and an array of bagels.  I decided to make our personal favorite, jalapeño.  I also decided to make flax seed bagels.

Adding flax seed to baked goods does a few things.  For one, the health benefits of flax seeds are incredible.  Flax seeds benefit the heart, fight cancer, and for all the good press they get, they probably fight crime.  Flax is also a good substitute for shortening, eggs, and other oils.  According to some of the research I did, adding flax requires a little extra water, the ratio being 1:3, so for each tablespoon of flax seed you add three tablespoons of water.  When you add flax to a baked good, you should lower the baking time and potentially increase the proofing process.  Everything I read suggested that the changes will vary depending on what you’re making, and that you really just have to experiment.  For the bagels, the one notable difference was that the dough became really sticky, which was a little harder to handle.  However, they tasted great and everyone appreciated the heart-healthy breakfast option. 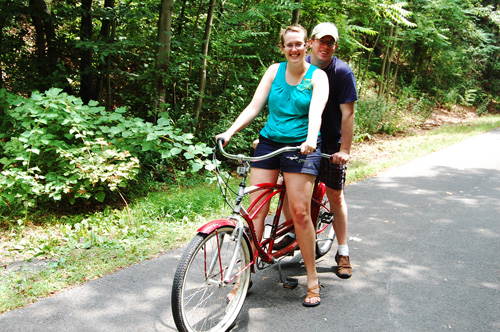 Dan and I tandem biking on the Rails to Bike Trail in Hanover, Maryland.

Here are some great reference articles: 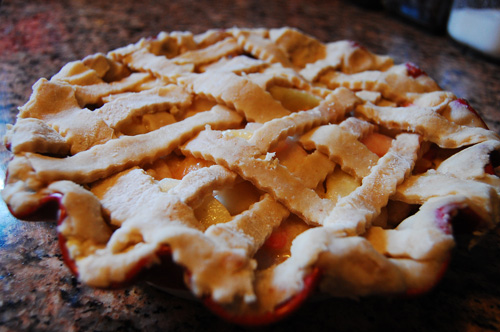 There are certain flavors out there that seem as though they were tailor made for each other.  Peanut butter and jelly, tomatoes and basil, apples and caramel, bourbon and white peaches.  There is something incredible about the way the flavors of white peaches and bourbon play off each other.  Similar to how the cinnamon in the honeysuckle sorbet brought out the honeysuckle flavor, the bourbon in this pie doesn’t stand out by itself, it simply illuminates the subtle flavors of the white peach. 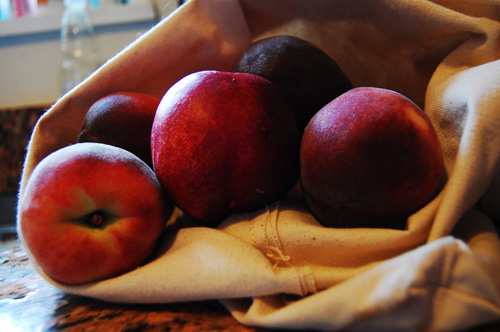 While I love all peaches and nectarines (okay, I love all stone fruit), I think that white peaches and white nectarines are my favorite.  Part of that love is aesthetic.  I love the slightly pink tint to the fruit when it’s very ripe, and I love the splashes of red and pink around the pit.  It almost looks like tie die or spin art, the fruit has these swirls of different shades of pink set against a clean, white palate.  I also love the way they taste.  When eaten alone they’re sweet, sweeter than yellow peaches, with just a hint of tartness.  When baked into pies they can be lost, which is why it’s important to pair them with flavors that accentuate their strong points. 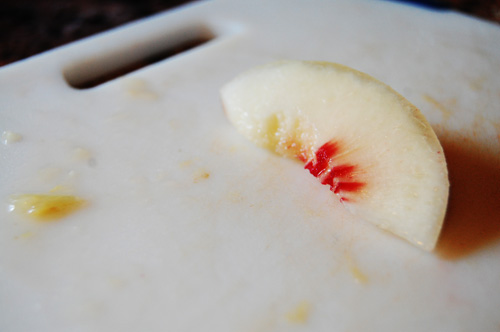 As far as bourbon is concerned, I can’t say that I’m much of a bourbon drinker.  I sometimes drink it with coke, but I don’t have the stomach for it solo, or neat as Dan has instructed me to describe it.  Not that I have a taste for any liquor neat- it’s been years since I’ve taken a shot (you could measure this to the minute since the ill-fated last tequila shot on my twenty-first birthday) and I’m the first to admit that it doesn’t take much to put me over the legal limit.  Nevertheless, I appreciate what liquor can add to a recipe- vodka added to a marinara sauce alongside some heavy cream makes a delicious pasta.  Wine added to blueberry soup creates a savory summer dish.  And, as it were, bourbon added to white peaches yields a sweet and complex pie. 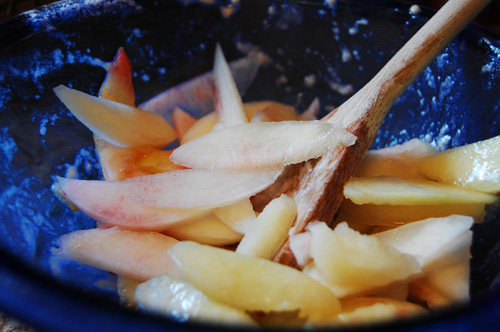 As I mentioned above, white peaches are known for their sweetness.  For a fruit that is low in calorie and high in fiber to be so rich in natural sugars adds a huge value to a pie, as it allows you to cut down on the amount of sugar that you have to add.  When baking with stone fruit, I like to add a combination of ripe and almost unripe peaches and nectarines.  I find that the ripe fruit bring all the flavor, whereas the harder fruit allow just the smallest amount of crunch after the pie has baked.  I don’t like when fruit pies are exclusively unrecognizable mush- I want people to go AH! and remember this is fruit they are eating.  It’s important to give credit where credit is due.  Thank you, white peaches.  And, thank you bourbon. 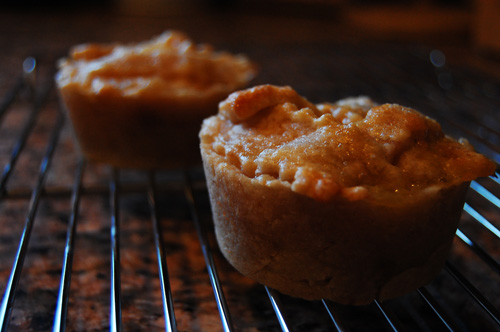 Peel the peaches and slice them.  They should be sliced thinly, but not squared.  Toss the peaches in flour, sugar, bourbon, and vanilla.

Spread half the dough in the pie dish and add the filling.  Roll the other half of the dough out on the counter and cut into strips.  Create a lattice shape pattern with the strips.

Whisk egg and brush over pie crust.  Sprinkle with sugar.  Bake at 375 for 25 minutes or until golden brown. 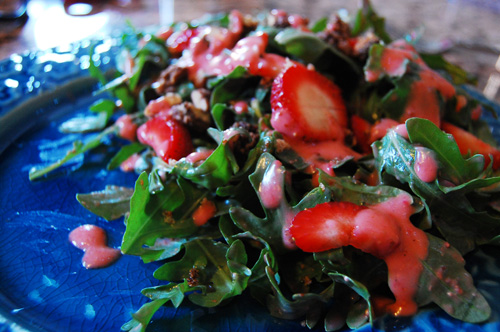 I know that it may feel like I’m bogging you down with salads, but what can I say?  During the summer I am salad crazy.  So when Sam at A Chef’s Kitchen shared this arugula salad with strawberry vinaigrette on Friday night, I couldn’t make it and then not  share it with you!  Not to mention, this salad prompted the line “I like my salad like I like my women- tall and sexy.”  I was charmed. 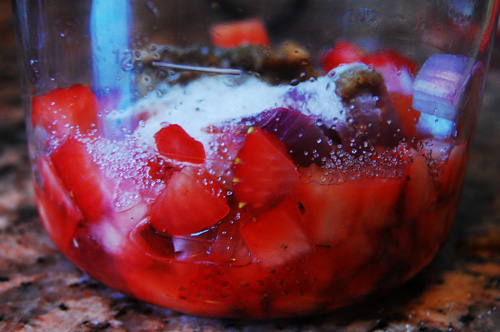 I varied from the recipe a little.  The official name of the recipe is “Arugula Salad with Balsamic Syrup, Toasted Candied Pecans and Strawberry Vinaigrette.”   The recipe calls for toasted pecans tossed in brown sugar, olive oli, and sea salt.  Since I stilled had some of my Cayenne Candied Pecans sitting around (Dan is an addict so I keep making them), I threw those in.  He also made caramelized balsamic vinegar, but I didn’t think I could make any less than what the recipe calls for without it not working correctly, so I cut that out too. 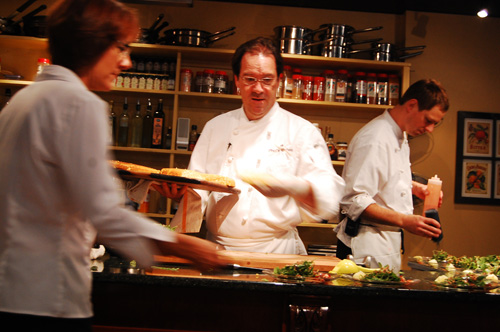 The strawberry vinaigrette is delicious, and I served the salad with whole pecans, crumbled pecans, and fresh sliced strawberries.  I know I’ve mentioned before that I absolutely adore arugula, and the peppery flavor works so nicely with this dressing.  The dressing is a wonderful blend of the sweetness of strawberries and the acidity of the shallots and vinegar.  It turned out perfectly.  It was tall and sexy, just like Sam said.  And, incidentally, not unlike the giant bust of George Washington at President’s Park in Williamsburg. 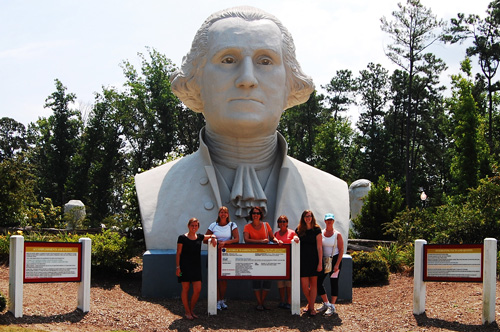 In a blender, food processor, or with an immersion blender, combine everything but the two oils.  Slowly add the oil while blending.  This will suspend the oil in other ingredients, giving it a creamy texture.

Toss the arugula in the dressing.  Top with pecans and strawberries.