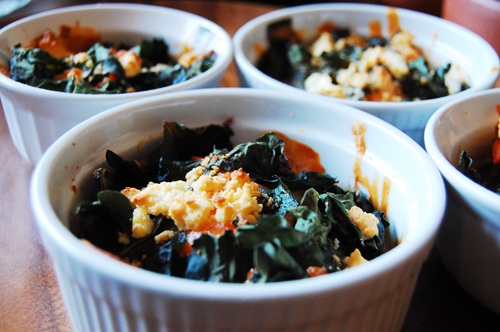 This weekend, my husband was offered a job.  A really great job at a firm in Baltimore that he respects and admires, that he’s insanely excited about.  Some things (like lodging) are still a little up in the air, but, as Dan described it to my mother, we’re getting things on track.  We’re recovering.

You may ask, what are we recovering from?  Well, to be honest, living in DC was never part of the plan.  In fact, living in Maryland after I graduated was never really the plan.  Before Dan and I started dating, my plan revolved around one thing and one thing only- the Peace Corps.  I spent years tailoring my resume to fit their needs and the fall of my senior year of college I was accepted and placed, heading to the Spanish speaking Caribbean.  And then the medical screening began. 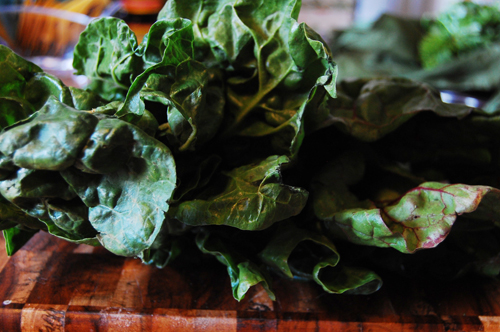 When I was in college I caught mono (from my roommate, thankyouverymuch), which morphed into shingles (I know, right?) and then, finally, an eye condition called keratitis.  Which, it turns out, the Peace Corps has a problem with.  First, they just medically deferred me.  I was crushed, but planned to work for the year long deferment and then leave.  Start my life as planned.  Soon thereafter Dan and I started dating.  When we got serious (immediately) the conversation kept circling back to what we were going to do while I was abroad.  Would we break up?  Would we do the long distance thing, me teaching AIDS education on an island far away and him eating hot pockets in Pennsylvania?  None of it made sense.  Until we decided to go together, to live my dream together. 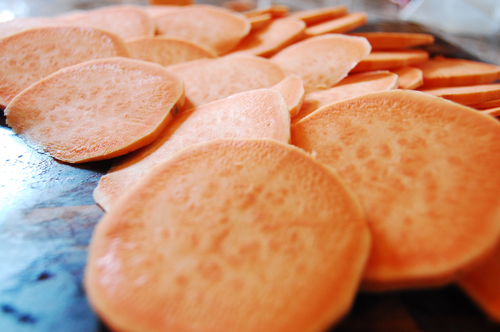 We started planning our wedding then, all the while fighting my deferment.  My year came and passed and the Peace Corps returned my phone calls less frequently and with more cryptic responses.  Eventually they came out and said it- I was too high risk.  Even though my eyes were in remission, the threat of a relapse while I was living in a developing country was too much for the Peace Corps to agree to, so I was out.  We were out.  It’s been a long process putting the pieces back together, figuring out what our next steps were and recovering.   This website is a byproduct of the journey, one of the only things about the experience that doesn’t bring me to tears.  I was devastated when my plan came crashing down around me, and for the first time we have a definite plan outside just being together.  We’re moving to Baltimore, we’re starting over, we’re getting back on track.  And I appreciate having you along for the ride. 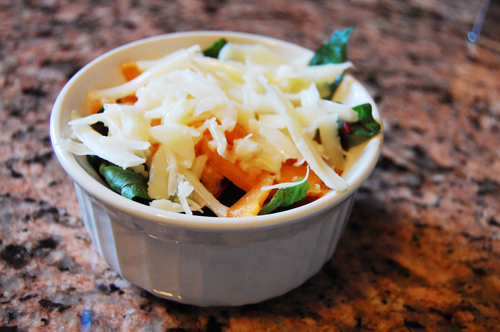 This whole process of apartment and job searching, moving cities, has left me feeling really emotional and nostalgic.  Living in DC was always supposed to be a stop in the road, and now it feels like it was.  The destination has changed, but with it new and exciting things have come into our lives.  For instance, I know now that I harbor a deep love of rainbow chard.  Especially when you pair it with cheese and potatoes.  I’m taking this as a good sign. 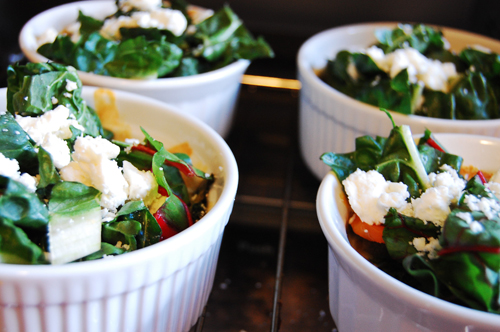 Peel and slice your potato.  In your ramekins (or in one larger serving dish) layer potato, chard, and cheddar.  You should have 1/2 cup chard left over.  End with a layer of cheese.

Pour the milk into the dishes, pouring along the edges so as not to disturb the cheesy layers.

Pull the ramekins out and add the remaining chard.  Sprinkle feta on top and cook for another 45 minutes.  Serve. 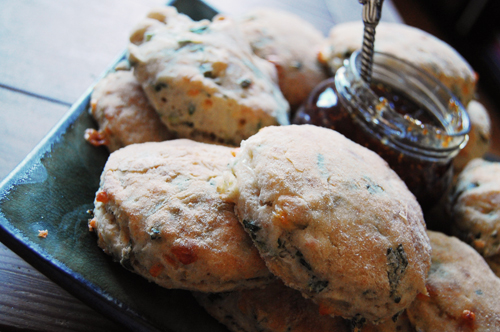 The smell that always makes me breathe deep, wrap my arms around myself, and sigh in delight is, oddly enough, the smell of freshly mowed wild onions.  Nothing smells more like spring, not the Bradford Pears or the warm air.  It’s the tart, stinky smell that makes it seem like the world has come alive again.  So it is no wonder, knowing that stinky onions equate spring for me, that I love ramps so much. 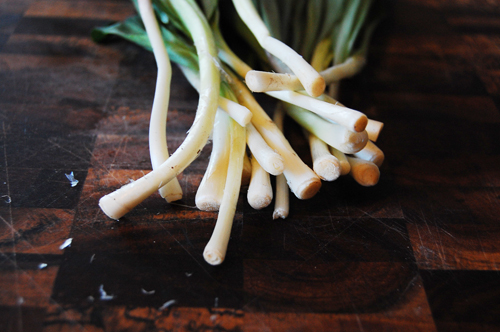 Ramps are a member of the onion family, a long leafy green attached to a small bulb.  They grow wildly and are most easily found in the woods (if you know where to look) or at your local farmers market.  While there are many things to do with the bulbs (pickle them, saute them, etc) I threw mine in the freezer for future use and focused on the greens.  Like most pungent flavors, I find that ramps pair nicely with cheese, and in the form of a bread.  I’ve had ramp scones and ramp muffins, ramp cornbread and ramp sourdough, but I think that these ramp biscuits have been my favorite variant yet. 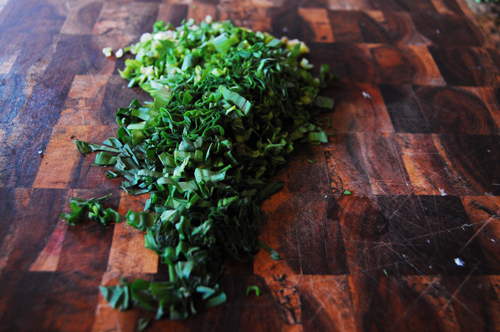 I served them with a fig jam (which by the way was amazing and got me so jazzed for figs to be in season that I cried a little in anticipation of the summer months) which was the perfect pairing.  The sweet jam played off the ramps in a fun way, and it all felt very spring.  I suggest you make them.  Go forth to your local farmers markets, pick up some ramps, and make biscuits!  Lots and lots of biscuits! 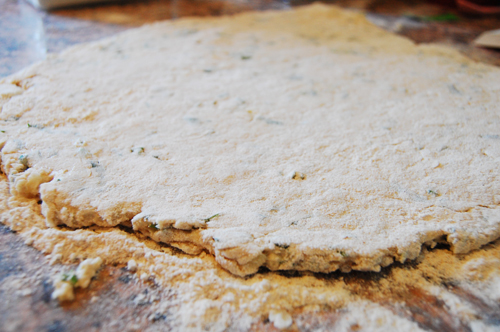 1/4 cup all purpose flour (for shaping the biscuits, not to go into the mix)

Preheat the oven to 475(f).  Whisk together the dry ingredients, the cheese, and the ramps.  Use fingers to incorporate cold butter.  With the butter, you really just have to knead it with your fingers until the mixture has a course texture, like corn meal.  Pour in cream.  Stir (preferably with a wooden spoon) until dough forms.  It’s okay if the dough is a little sticky, you’ll work it out on the countertop.

Sprinkle the all purpose flour onto the countertop and scoop your dough onto it.  Use your hands to flatten it out.  I like to flatten it a little, flip it, and flatten it some more.  This method ensures that one side doesn’t get over worked, which is important.  If your dough (and this goes for any dough, really) ever gets too sticky and unmanageable, pop it into the fridge for twenty minutes or so.  The stickiness is really coming from the butter getting too warm, so cooling it off will allow it to firm up a bit.  Using a biscuit cutter (or whatever you have laying around), cut the dough into circular shapes.  Place on ungreased baking pan.

Now, I put aside the measuring cup that I used to hold the heavy cream and melt the butter for glazing in that.  It just gives it an extra creaminess.  Using a baking brush, brush melted butter on top of the biscuits.  Bake for 10-12 minutes. 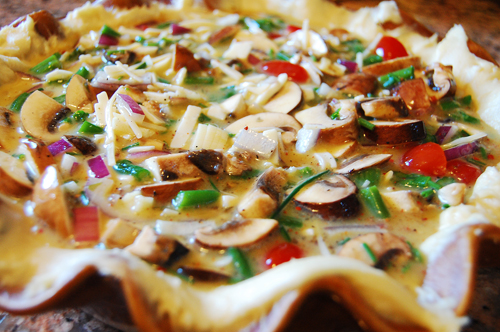 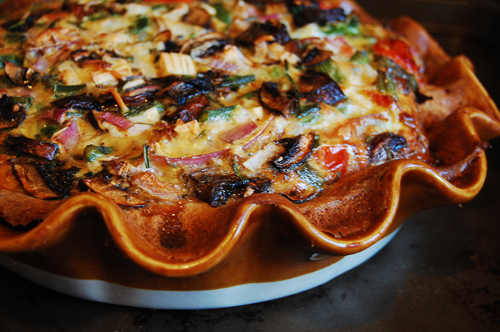 I set out this afternoon to make a quiche with asparagus and wild mushrooms.  I thought, so seasonal! So local! So delicious! But, being me, I can never leave well enough alone.  When I got home with my groceries for the week I thought, well, I can add some chives from Tuesday’s dinner, some green onion from Wednesday night’s dinner, some cherry tomatoes from Thursday night’s dinner (I know, not seasonal).  I kept adding until it was this mass of vegetables floating in egg.  I’m not complaining. 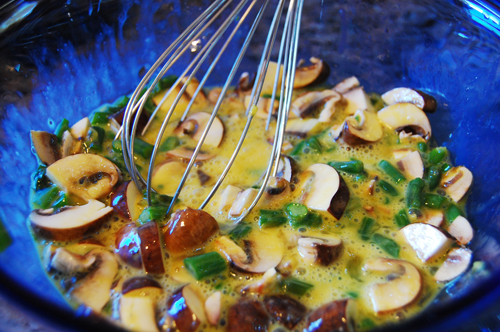 With the exception of the tomatoes (for which you can substitute dried), this dish is a symphony of spring flavors.  The thing that I love about quiche is that it is hearty and light at the same time.  The vegetables danced in the fluffy eggs, and paired with a rich crust it is the perfect anytime meal.  Great for brunch, great for dinner.  Great for life.

Since that’s pretty much all I have to say about the quiche (except try it, it’s awesomely vegtastic), I thought I’d wax poetic about my newest accomplishment.  It’s not really an accomplishment yet, more like a lead to what I hope will be an accomplishment- I think that I’ve found a way for us to have a garden.  I’m exploring my options between community gardens in Baltimore City and yard sharing through a site called hyperlocavore.  Either way I have my heart set on gardening this season so I’m planting seeds (a little late) in these egg shells.  In the past we’ve wrestled with the biodegradable planting pots, which never seem to totally degrade, so I’m excited to try planting in egg shells.  It’s composting and gardening at the same time.  Wish me luck. 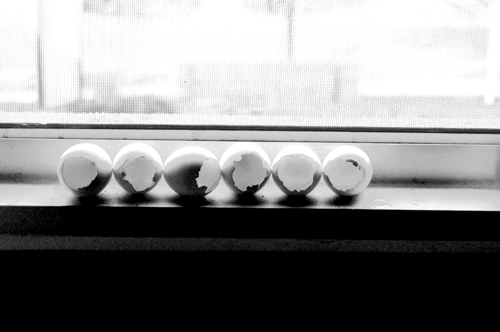 Prep all vegetables.  Whisk together eggs, milk, and cheeses.  Stir in vegetables and spices.