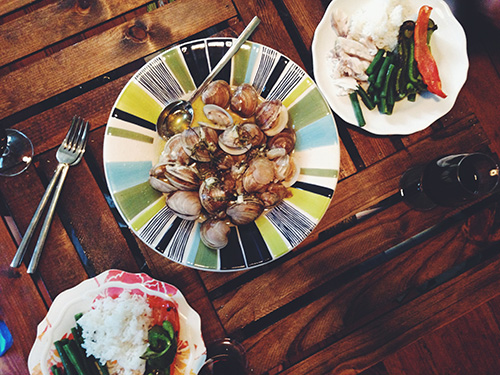 Clams on the Grill

Last week I was chatting with my grandma on the phone and I made a comment about it being mid-August. No, Elena, she said (laughing) it’s late August. Oops. I lost a few weeks. 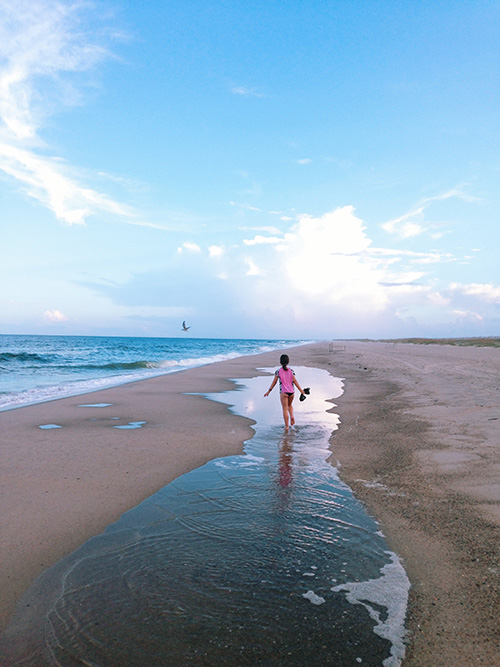 That’s common this time of year, watching the days and nights and weeks and weekends blur past, particularly because our house has been filled to the brim with guests. Dan and Kaylee are getting a little bit exhausted by the revolving door of friends and loved ones, but I’m soaking it up. This is a perk of living at the beach, right? 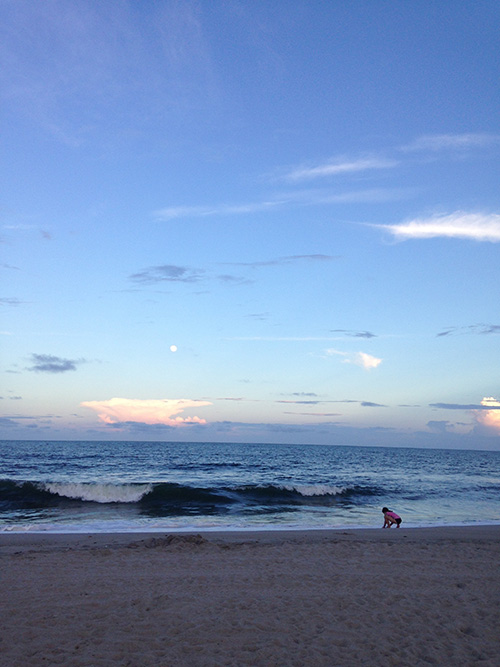 Last weekend I drove to Richmond to meet my sister in law Megan and pick up our niece, Meredith, who just turned 7. A few years ago we started taking Meredith for visits with us all on her own, and this past week we had the pleasure of hosting her for the first time in North Carolina. We spent the beginning of the week soaking in the sun and sand (Meredith’s two requests were to find shells everyday and take a bubble bath every night. We were happy to try and help her realize that dream), and the Turcottes (Megan, John, and almost three year old Amelie) joined us on Thursday. 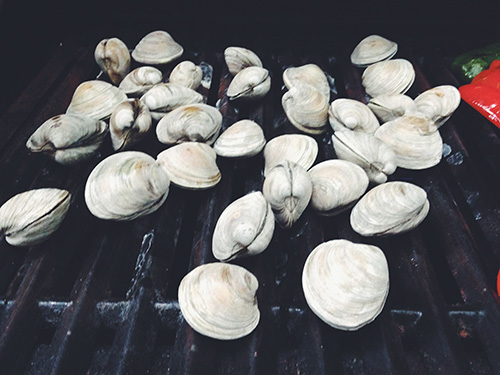 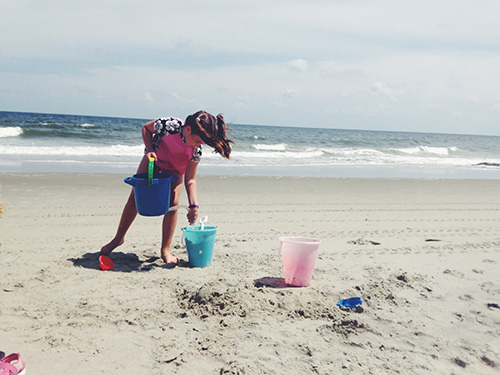 Meredith is a bright, sweet, fun, and funny girl, and I absolutely cherished getting to spend the week with her. She came to school with me during our in-service week and it was a delight having the opportunity to watch her in the classroom, talk to her about what she was reading and doing, and explore Wilmington through her eyes. I haven’t been so engrossed in shell hunting since I was 7 myself, and I loved it. 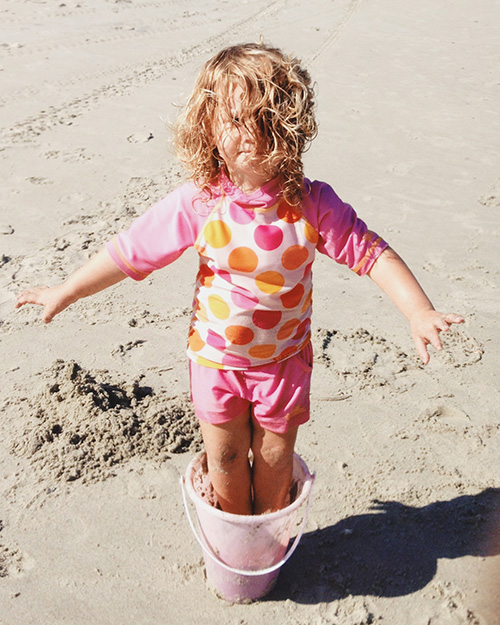 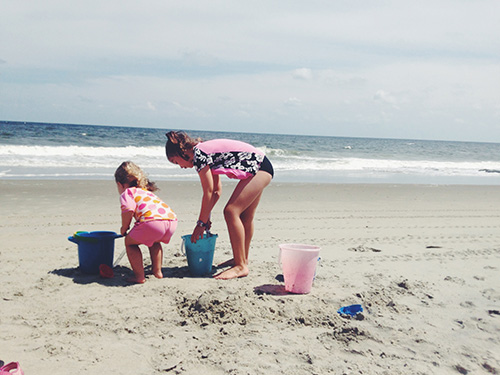 On Saturday we drove down to Kure Beach to hunt shells and fossils and relax in the sand. It wasn’t a great day for swimming (it was pretty rough and the coquina rocks make it difficult to navigate the water), but it was beautiful and I had a lot of fun sitting in the surf with Amelie. We stopped by Seaview on the way home and picked up a red drum and two dozen Stump Sound clams, as well as a bounty of vegetables from their food stand. That night we feasted on seafood and end-of-summer peppers and beans, rounding it all out with a salted caramel peach pie. 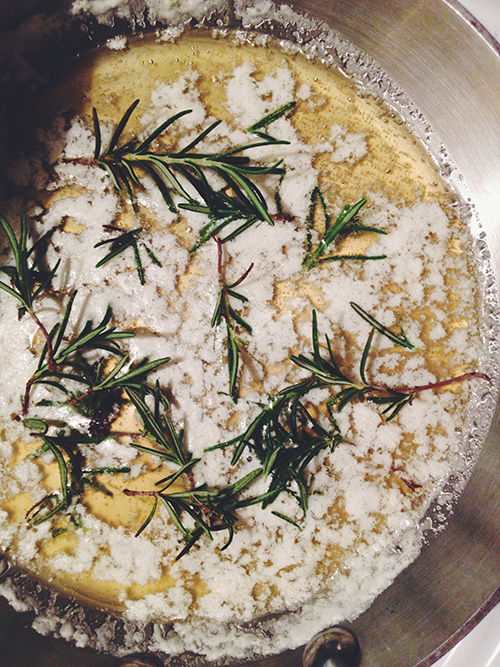 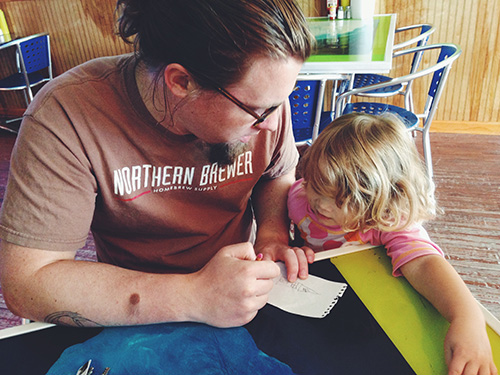 It was hard saying goodbye to our sweet nieces and their parents this morning, and our house is all the quieter without them. All the reason to start planning for next year’s Auntie Elena & Uncle Dan camp! 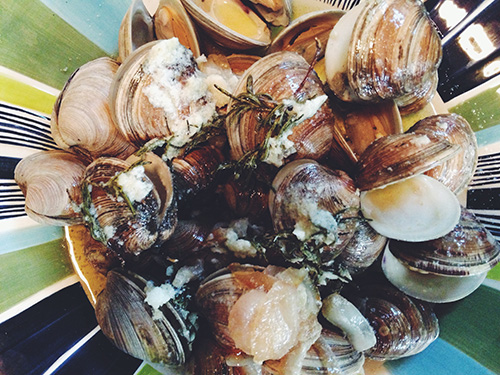 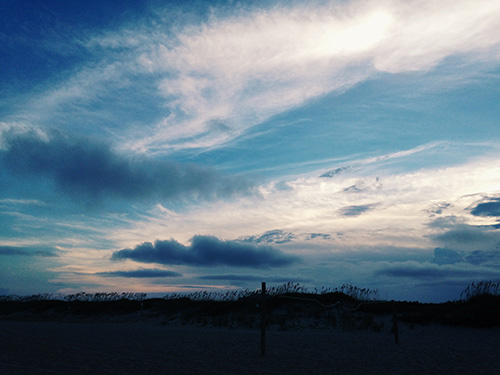 In a saucepan melt butter over low heat. Mince garlic and slice shallots and add to the pan, along with rosemary. Simmer for 25-30 minutes.

Scrub clams thoroughly, discarding any that are open. Grill over medium heat for 10-12 minutes or until they’ve opened wide. Top with butter sauce and serve immediately. 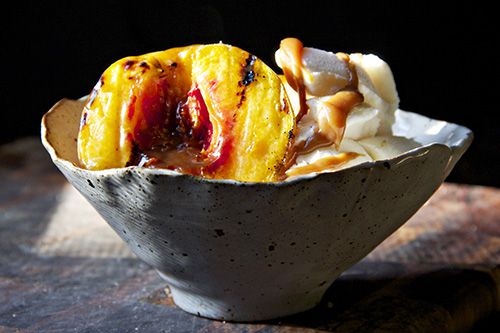 Summer is, without argument, the most magical season. Long days, warm nights, endless possibilities and freedom. Summer brims with nostalgia and potential, all wrapped up in the warm glow of the long sunlight evenings. I pack my days and nights full with people and parties and travel and salt and sand and laughter until before I know it months have blurred into one long humid afternoon. Exactly the way that I like it. 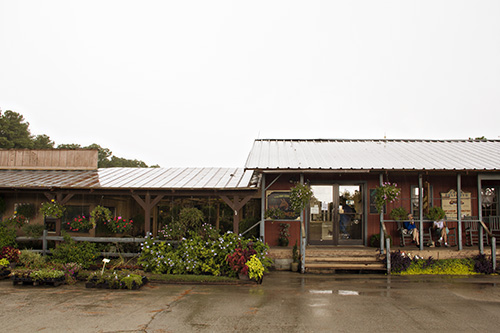 Recently I had an unexpected weekend all to myself, which never happens, and had me giddy with the possibilities. Would I go to the beach and lay in the warm sand for hours? Would I buckle down and get to all that work I probably should tackle (unlikely)? Should I curl up on the couch with the dog and marathon Gilmore Girls while polishing off the last of the salted caramel sauce? As I sat at my computer that Saturday morning checking the weather and sipping my coffee it occurred to me that this free weekend might be the perfect opportunity for spontaneity. A little Googling and a few phone calls later it was decided, I was going peach picking in Brunswick County. 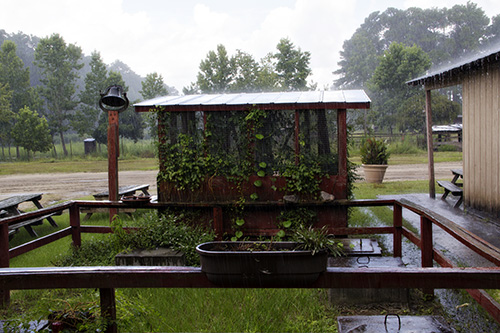 Brunswick County stretches from the Cape Fear River to the border between Carolinas, making it the southernmost county in the state. Its 1,050 square miles include the Brunswick Beaches- Sunset, Ocean Isle, Holden, Oak Island, Caswell, and Bald Head Island. Driving through Brunswick County you’ll find farmlands, fast growing communities, beaches, riverfront, and plenty of golf. Founded in 1764 it was named for Brunswick Town, a settlement and major 18th century port. Brunswick Town is now a colonial ghost town, but it was the first settlement on the Cape Fear River and thrived until it was destroyed during the Revolutionary War. The county seat is Bolivia, and Brunswick County borders Columbus, Pender, and New Hanover to the north and Horry County, South Carolina, to the south. 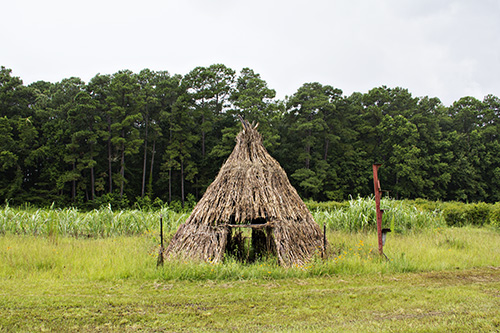 I’d been thinking that my late summer installment of Tasting North Carolina should focus on the stone fruits currently flooding the market, and had been toying with the idea of visiting a peach farm. That Saturday my friend Brandy and I drove the hour south to Calabash to visit a farm that (according to the web) had pick your own peaches, berries, figs, and more. It sounded like heaven! It sounded like fate! I should have known better! As we pulled into the farm the skies opened up, letting loose the kind of rain that only a week of unbearable heat in the South can elicit. We scrambled inside and started to make arrangements, only to discover that they a) only offer pick your own in the early morning (we got there around 11.30) and b) don’t ever pick your own peaches, just blueberries. A double whammy of disappointment. 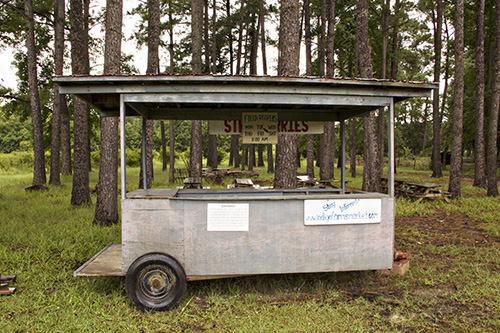 Thankfully Brandy and I glass-half-full type people, especially when we’re on a spontaneous road trip, so we bought some peaches, green peanuts, and hot sauce (made right there on the premises) and headed on our way. Our original plan of visiting the beaches were dampened by the rain, so we headed back on home, happily chatting as we drove about how we were going to spice our boiled peanuts. 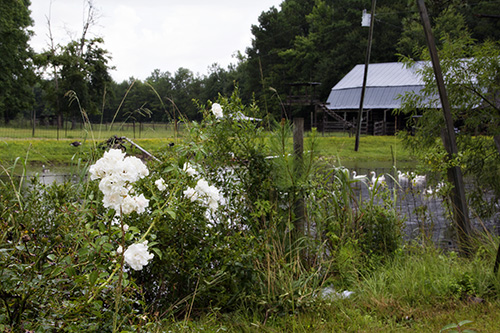 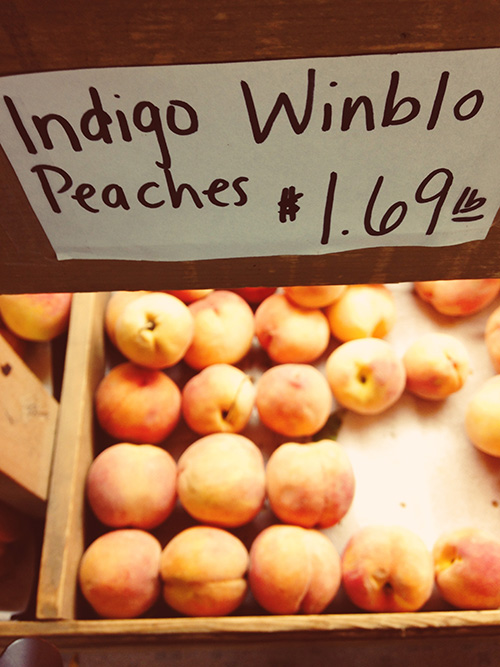 The real highlight of the trip happened in Leland, just over the bridge from Wilmington, when Brandy spotted a massive alligator on the side of the road. And because this was a day of spontaneity I turned the car around and we pulled out our cameras, sprinting to find it. As we approached he swam from one side of the marsh to the other, towards us, allowing us an up close look at easily the biggest alligator either of us have seen in the wild. The moral of the story? Things may not always work out as you expect them to, but in the end there will probably be alligators. 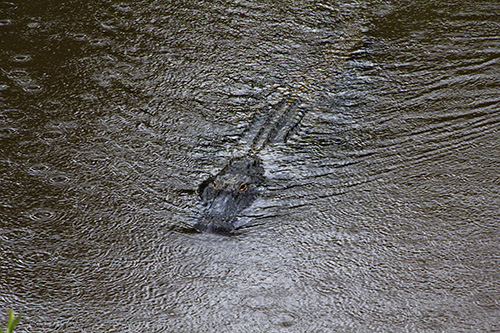 Begin by making your caramel sauce. In a heavy skillet melt the sugar, stirring constantly. Sugar will clump and then melt, continue to stir as it turns an amber brown. Cube butter and stir into sugar until combined. Remove from heat and add cream. Stir rapidly until fully incorporated. Add in vanilla extract and allow to cool.

Slice peaches in half. Brush each half with coconut oil. Grill peaches flesh side down for 5-6 minutes or until tender. Serve hot with ice cream and drizzled caramel sauce. 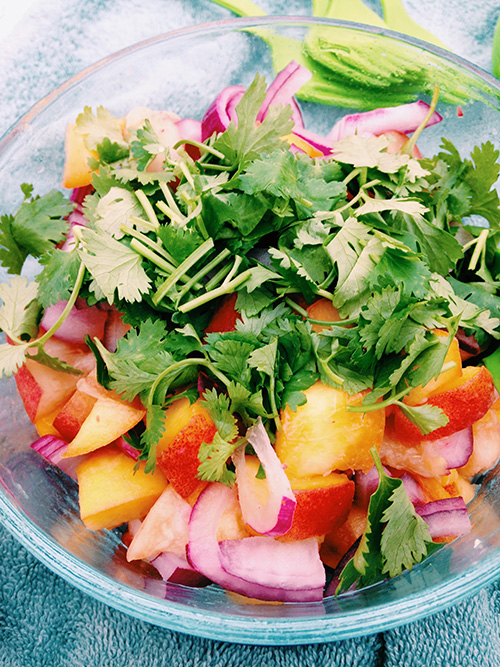 In the weeks since my big freelance project wrapped up I’ve felt drunk with the power of free time. I’m a say-yes-to-everything kind of gal anyway, so the sudden onslaught of free time combined with all the opportunities provided by summer life at the beach has kept me busy. The very best kind of busy. 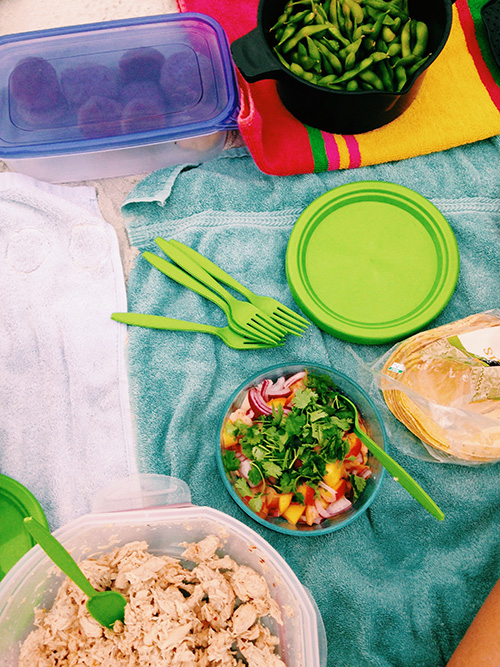 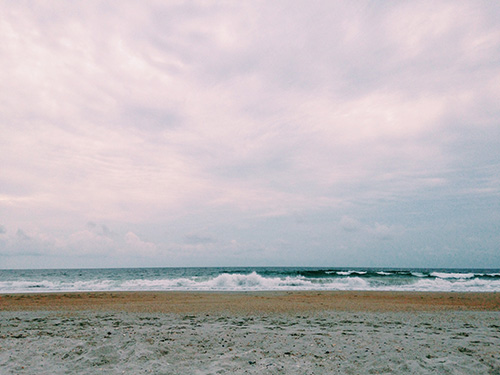 This week we decided to picnic at the beach with friends one day after work, giving ourselves the chance to enjoy the sand and sun and salt. I made a pulled chicken and a batch of peach salsa, and we feasted on tacos and watermelon and edamame and snickerdoodles. It was an easy and simple dinner that was perfectly portable and just what we needed before surfing and swimming into the dusk. 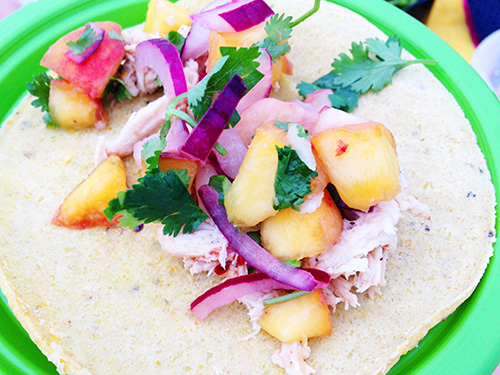 Peaches have been flooding the markets lately and, by extension, flooding my kitchen. Eating them whole, grilling them, throwing them in salads and smoothies and pies. They’ve been especially helpful in my efforts to stick to the “Vegan Before 6” program. This salsa was fresh, tart, and sweet, a nice balance to the spicy chicken. I will absolutely make it again to pair with fish, grilled portabellas, grits, burgers, sausages, grilled pork, or even mango sorbet. 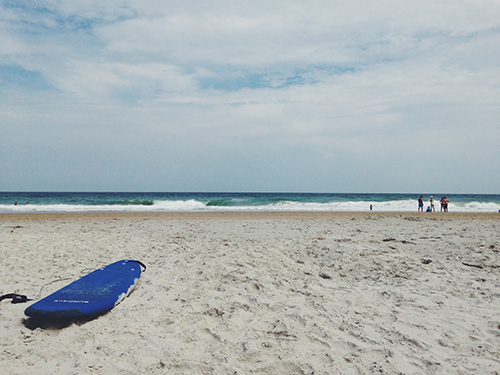