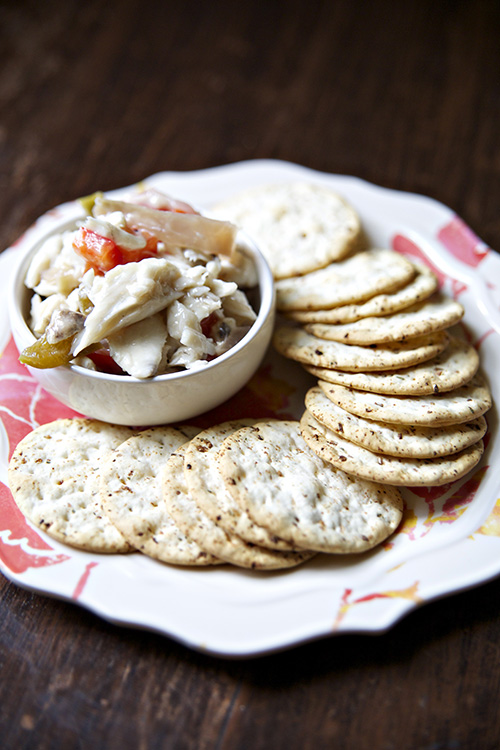 Last weekend I headed up to Morehead City for a photoshoot. I’ve been doing a lot of photoshoots lately, totally booked solid, which is amazing. Amazing and also a little disorienting because I can’t for the life of me tell you what month it is, let alone what day. For the first time in my life I’m excited for the slow melancholy of January. A trip to Carteret County also means the opportunity to visit with the parents who are the bests hosts because they’re always willing to have us, they always have wine, and they usually send us home with fish. This trip it was a cooler full of freshly caught grouper. 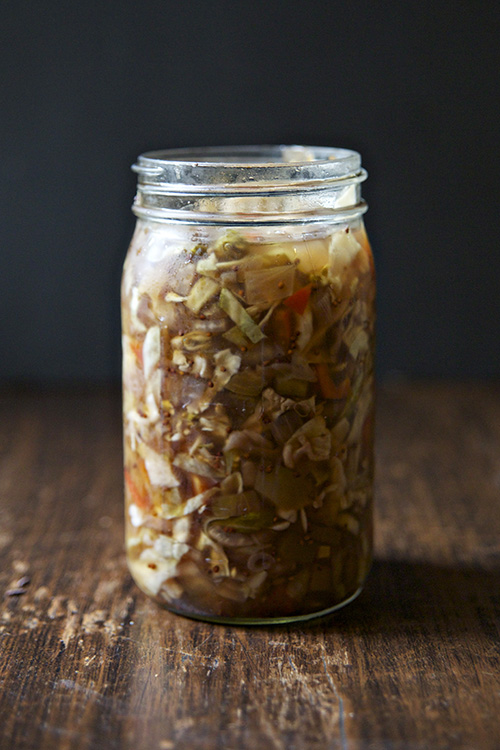 In addition to raw grouper steaks for grilling (yum), the Capt’n packed us a container of cooked pulled grouper, ready to be tossed into grouper salad. So when I got home and was putting together food for the week I mixed the grouper with a bit of mayonnaise, a cubed red pepper, spices, and a few spoonfuls of chow chow. The finished salad was light and tangy, full of flavor and a quick and easy lunch. 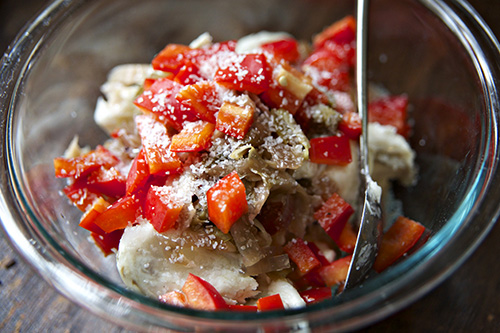 This salad could work with pretty much any combination of shredded fish, fresh vegetables, fermented vegetables, mayonnaise, sour cream, or yogurt, and spices. I loved the way the chow chow lent a sweet and spicy flavor with a punch of apple cider vinegar, but I’m also thinking of doing a salmon, kimchi, and snow peas twist. 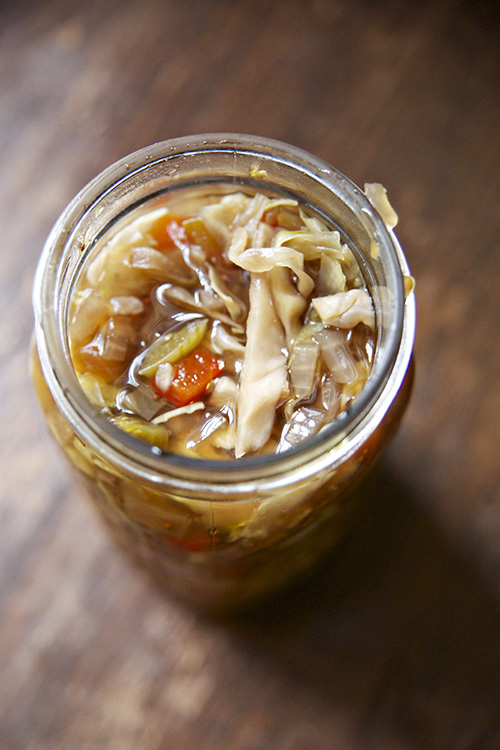 This weekend we headed to Bald Head Island to celebrate our anniversary. Today I leave for Louisiana, and then when I get back we head to Maryland for a wedding. Later this month I’ll be in Durham, New York, and Lake Waccamaw. Tomorrow this blog will mark 5 years in existence. As I look back on the past five years, I can’t help but to be amazed at how far we’ve come. How far I’ve come as a writer and photographer, how far I’ve come in the kitchen and as a recipe developer, how far Dan and I have come together, how many recipes have been posted (more than 350!). It’s been an incredible run, and I feel so excited for what is to come as I look out over the next few months and the next few years. Thanks for being here for the ride! 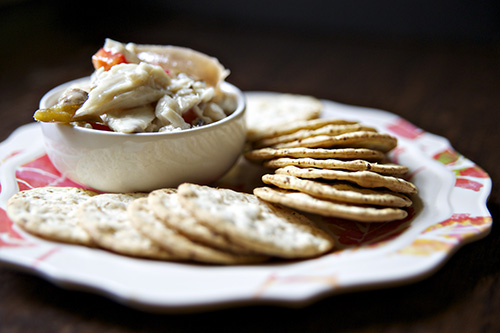 Chop vegetables. Mix with fish, spices, chow chow, and mayo. Adjust spices and mayo to taste. For a creamier salad, pulse in food processor until blended. Serve chilled with crackers. 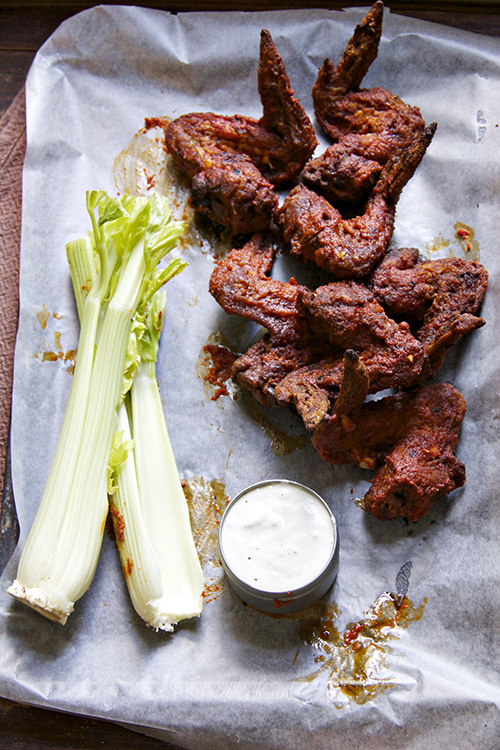 There are many things I adore about my college roommate Charlotte, but her unabashed love for chicken wings is high on the list. Charlotte loves wings like I love pie. When we eat out with her it is a givein that we’ll be getting wings, and she’s spent a lot of time recently trying to convince her fiance Gordon that wings are just the perfect food for a fall wedding reception. I have Char to thank for my love of wings, and for the fact that I’ve been trying to perfect my wings recipe in the hopes that her other bridesmaids will agree to a wings themed bridal shower. 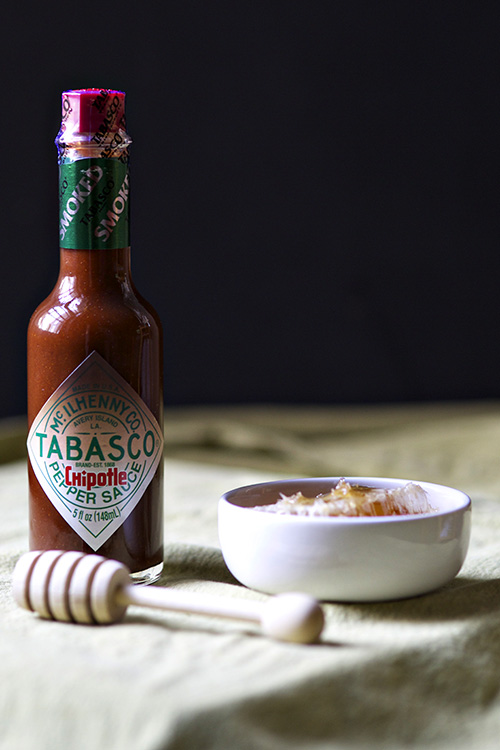 This week I whipped up a batch of honey chipotle wings using Tabasco Chipotle Hot Sauce and local honeycomb, a combination that was sweet and had a low, simmering spice. The solution for those times when you’re tired of the old hat buffalo sauce, your palate doesn’t feel up to the five alarm sauce that needs to be served with a gallon of milk, and you’re in the mood for something a little on the sweet side. These wings will definitely be on the menu at Charlotte’s wingstravaganza. 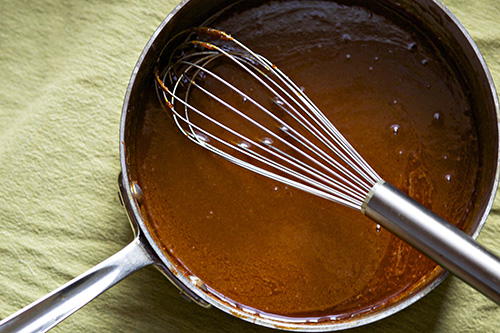 Later this month I’ll be heading to Avery Island, Louisiana, to visit the Tabasco headquarters, learn about the process of making their favorite hot sauces, and hopefully eat a lot of delicious food. As it were hot sauce makes up a significant portion of my diet, so I’m feeling pretty confident this may be one of my favorite trips this decade. 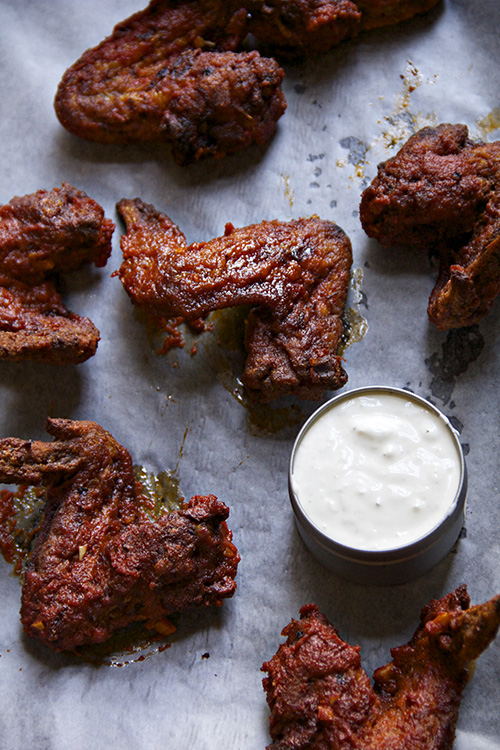 This post is sponsored by Tabasco. The words, thoughts, and opinions are my own.

In a large and deep pot, heat enough oil to submerge wings. Oil temperature should be 375F.

In a saucepan melt butter, honeycomb, and hot sauce. Simmer until completely incorporated.

Mix together flour, panko, and spices in a medium size bowl. In another bowl whisk eggs.

Pat wings down and dip first in eggs, then in flour mixture. Drop in oil and fry 4-6 minutes each or until golden brown. Immediately dunk them in the sauce, soaking both sides evenly. Transfer to a rack to cool slightly. Repeat with remaining wings.

Mix together all ingredients for blue cheese dressing. 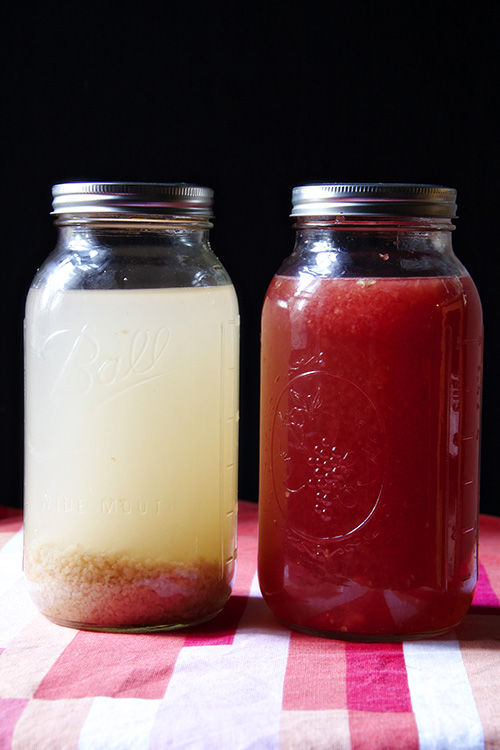 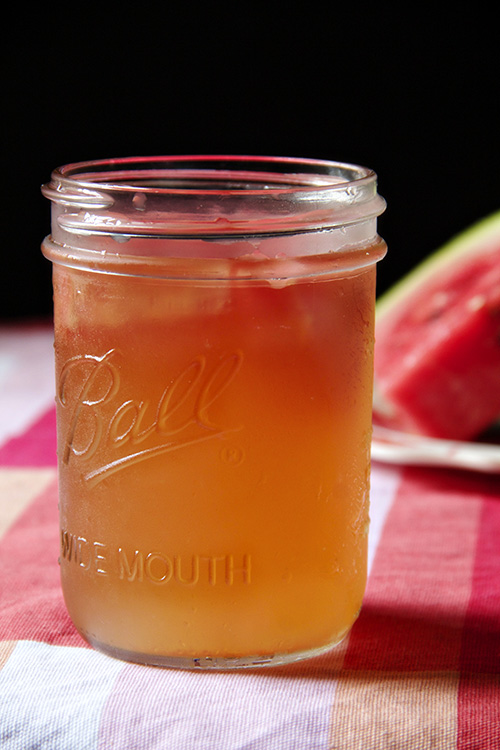 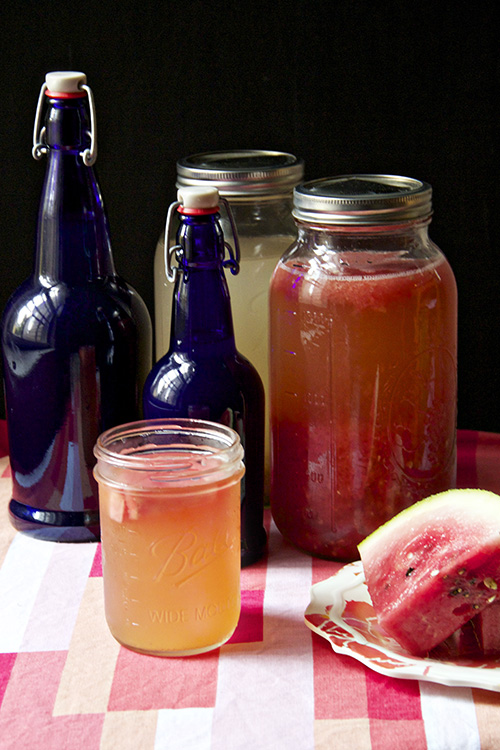 Before I moved to Wilmington I hadn’t spent much time in New Hanover County. When we beached we headed to Morehead City, where the Rosemonds have had a family home since the 1950’s (the Swamp House), and had only visited Wilmington once or twice in high school and college. It is an understatement to say that I was pleasantly surprised by the amount of life and culture that this town is brimming with. Thanks to a thriving film industry (thanks to North Carolina’s tax incentives for film) and a large University, Wilmington draws people from all over the world, all walks of life, who have changed this small port city into a diverse and fascinating place. New Hanover County is located in the Southeastern part of the state, and was formed in 1729. It is one of the original port cities in North Carolina and played a vital role in the development of the state and the colonial USA. It is surrounded by Pender County to the North and Brunswick County to the South. 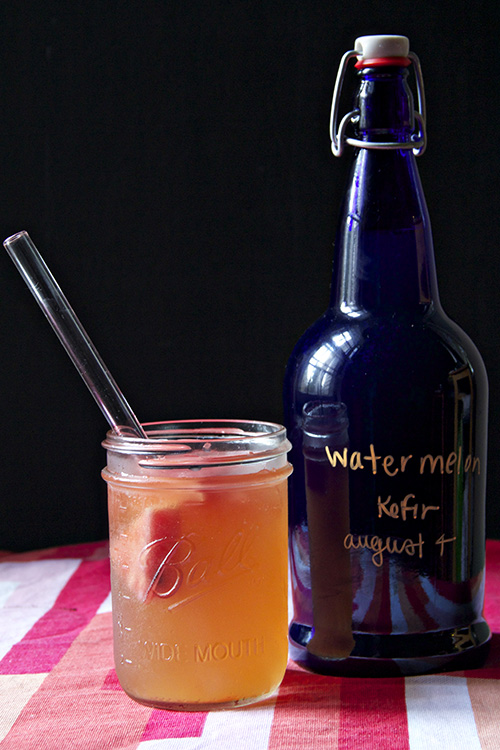 I was particularly amazed to find a rich food culture in Wilmington that went far beyond your expected coastal fare. There is a community of people focused on eating and making real food, with an emphasis on whole, local, and responsible eating, things that I am personally commited to and passionate about. Organizations like Feast Down East and Down East Connect help local farmers and community members connect to bring fresh seasonal food into kitchen’s without a middleman. The local co-op Tidal Creek just finished a month long challenge motivating and helping people to eat a month of local food. And one woman, Ryanna Battiste, is helping people change their relationship with food through a small business called GRUB.

I met Ryanna through many connections all at once, and it became clear after we moved to Wilmington that Ryanna was someone that I needed to know. Over the past year I’ve attended her workshops, partnered with her, and had long, amazing, compelling conversations over a glass of wine about how food can nourish us, and harm us, and how important it is to commit yourself to learning about what it is you’re putting in your body. One of the things that GRUB is doing that I was immediately intrigued by was promoting a fermented probiotic drink called water kefir, something she describes as an “affordable and bio-available way to deliver healthy bacteria” that produces a “fizzy and delicious fermented soda.” Water kefir, like kombucha or yogurt, introduces probiotics into your system that can help with gut health and over all body health. Since she started selling water kefir kits she’s grown a community of over 400 home-brewers all over the country.

After attending a water kefir demo I brought home a kit (you can also order them online: http://thisisgrub.com/projects/water-kefir/) and immediately started brewing. The kefir is flavored with fruit, and since we started brewing we’ve made everything from lemon ginger to mango to our new favorite, watermelon. The brew is light and fizzy, like a soda, and the watermelon kefir is nothing short of incredible. It’s easy to see why so many people in this community are whipping up batches of their own. 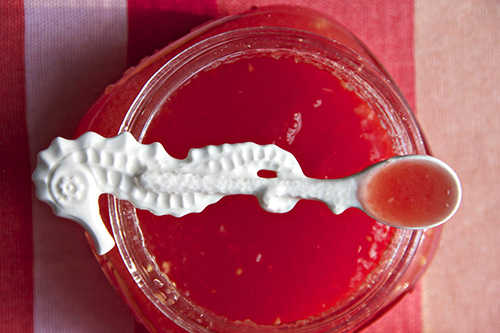 This summer watermelon  has made up around 80% of my diet, leaving me to wonder what else I can do with it. Smoothies? Absolutely. Watermelon vodka tonics? Naturally. Watermelon, mint, and feta salad? Of course. Watermelon and lime jam? Why not! Nothing says summer to me quite like a cold slice of watermelon, so I ask- what are your favorite ways to use this most delicious of fruit? 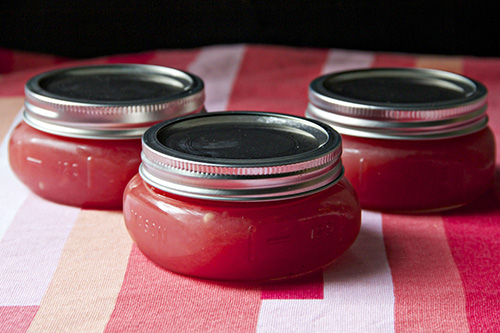 Ed note: After I approached Rye about featuring her in this series, she decided to sponsor B&S through a Water Kefir badge in the sidebar. Thanks for the support, Rye!

In a quart jar combine water, sugar, figs, and the culture. Mix to combine, cap, and store in a dark cabinet for 24-48 hours.

Strain out the grains and discard the figs. Combine the liquid (the kefir after first ferment) and the pureed watermelon in a second jar. Let ferment an additional 24-48 hours. Chill and serve.

Stir all ingredients together until thoroughly incorporated, 3-5 minutes. Transfer to half pint jars and let sit 30 minutes. Refrigerate for up to 2 weeks.