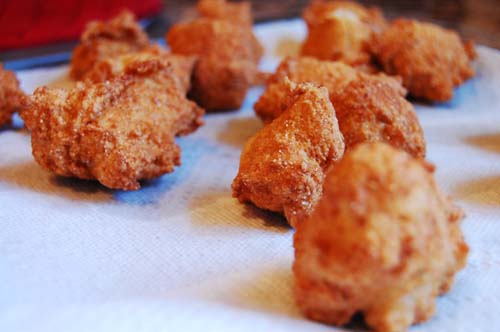 Usually when I write posts I try and come up with a charming or funny story to regale you with.  Using this formula I tell a story about my life, something that happened, whatever, and then when you’re not even expecting it (except you totally are) I tie it back into the recipe.  And then I tell you why I made the recipe, what I liked/didn’t like about it, and usually end it with words like “delicious.”  Because cooking wise, I’m lucky enough to have more delicious nights that fail nights. 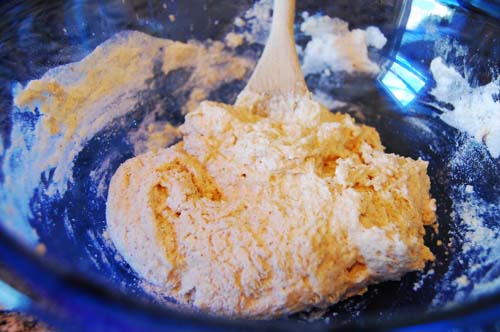 Tonight was a fail night.  First of all, I have been sick for 8 days.  With a cold.  WITH A COLD*.  I’m going to admit something that is not going to help my street cred, but on a regular basis I come into contact with 4 people, with few exceptions.  Three  people at work, one fiance.  If any of them gets sick, no matter how minor it is, I am sick within hours.  And for five or six times as long as them.  Imagine what my life was like when I was a preschool teacher.  Awful.  That was also the year I got shingles.  It’s almost as though karma is paying me back for all those kids I dunked under when I was a swim instructor.  And all those times I dressed my brother Ryan up like a girl. 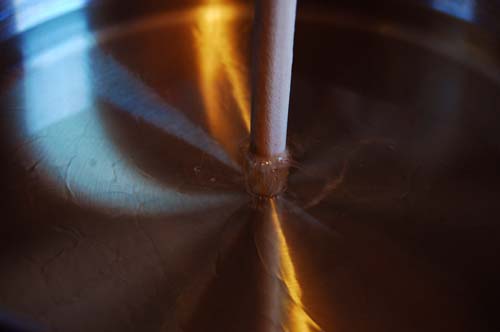 Anyway, so I’m sick.  But I go to work because I’ve missed a few days and I need to go to work.  It’s a long day because my cold has moved to my chest and I have this cough that makes me feel awful.  When I get home I get start making a recipe that I am planning on sharing tonight.  Seared (organic) yellowfin tuna with jalapeño, cilantro, ginger, avocado, and lime.  I am going to tell you about my father’s winter as a commercial tuna fisherman.  Instead, the tuna was bad.  And after a little breakdown on my kitchen floor I thr0w together a pizza (with a tomato from a seed that we harvested last year, which would be more exciting if I weren’t sick and pissed off about the tuna) and pour myself a glass of wine.  And posted this hush puppies recipe.  Because I’m sick and I’d been storing it for the night when I needed to get a post out but just couldn’t.  Which is tonight.  Plus, hush puppies are awesome, you should make them.  Delicious. 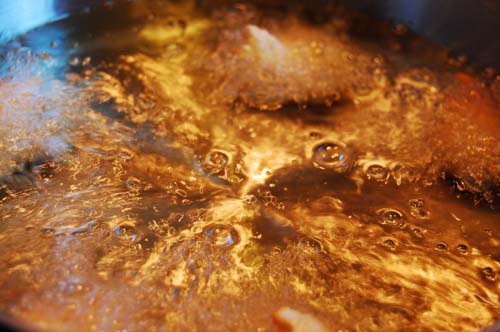 *Turns out I am sick with an acute upper respiratory infection, plus a dash of bronchitis and a hint of sinusitis.  At least my body keeps it interesting, right?

Begin by mixing dry ingredients.  In a separate bowl, whisk together egg and buttermilk.  Combine wet and dry ingredients, and use your hands to form 1/2″ round balls.

Heat your oil in a large skillet.  You want your oil to be deep enough that the puppies can be totally immersed.  You’ll know when your oil is hot enough if bubbles form around a wooden spoon.

Drop each ball into the fryer.  Use a spoon to push them around so they’re sure to get cooked on both side.  Cook until golden brown- 3 or 4 minutes.  Remove with a slotted spoon and place on paper towels so they can dry through and through. 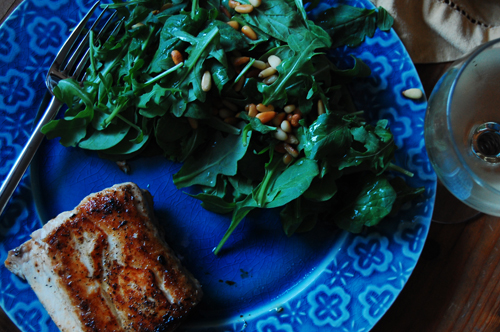 People often make rash assumptions about me.  For instance, people often assume that because I’m tall, I should play basketball.  Then I fall in front of their face and they reconsider.  But until they see me fall/drop something they believe me to have wasted years of potential talent.  Talent I promise I do not have (much to the chagrin of my high school history teacher, the basketball coach).  Another assumption people make about me is that because I cook well and run a food blog that I am knowledgeable about all food.  People, I am a SOUTHERN food writer.  I can also talk comfortably about Mexican and Italian food, but that is only because I eat a lot of Mexican food and my mother is Italian.  She’s also Irish, but I can’t say I’ve ever been served a traditional Irish dish.  If you met my grandmother, you’d understand why.  She doesn’t even make my poor grandfather cookies, let alone potatoes (just kidding, Grammy.  Wink, wink, Poppie.) 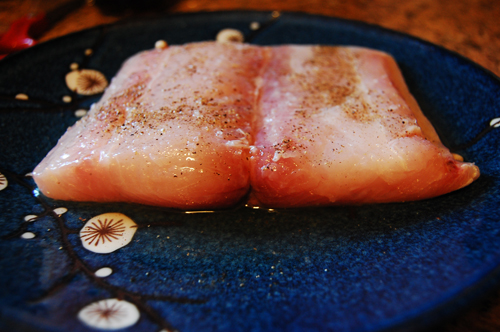 One of the things I’ve noticed about the south is that European ancestry is not as important within the caucasian population as it is in other parts of the country.  In the northeast people define themselves by their immigrating forefathers, holding tight to their customs.  In the south it seems that people have shed a lot of those ties to Europe and are simply southern.  The southeast was heavily settled before the Civil War, but after 1892 people were funneled through Ellis Island in New York City.  As a result, the northeast had an influx of immigrants more recently and more heavily than the rest of the country.  On my father’s side the name-bearing European immigrant was a man named John Kwiatkowski.  He was Polish, and he immigrated indirectly to North Carolina, where he eventually married into a settled family.  When he arrived, he changed his name to Rosemond, because Kwiatkowski meant “man of the flower.” 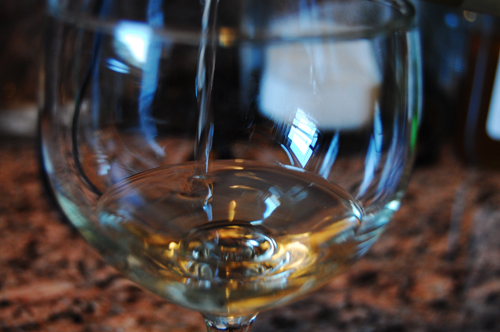 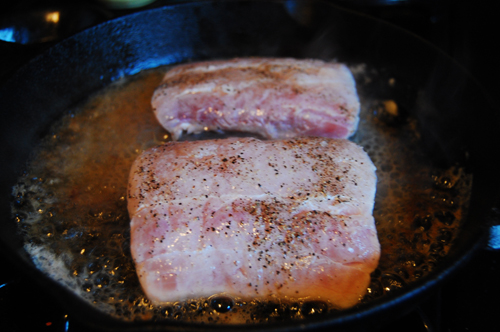 This is all a round about way of admitting that another thing I know very little about is wine.  Dan and I have been trying to educate ourselves, but we are totally guilty of buying wine based purely on the label.  What do you expect, we went to art school. While I’ve had sips of white wine here and there over the years, I’ve always preferred red.  However on a recent trip to Williamsburg I realized how refreshing a glass of cold white wine could be in the summertime. 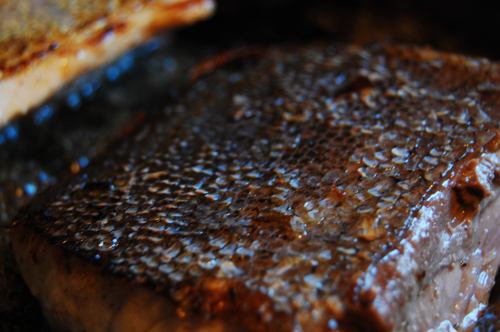 There is a Polish proverb that says “fish, to taste right, must swim three times- in water, in butter, and in wine.”  So this week I made dolphin fish sauteed in lemon and butter, and served with a cold white wine. And an arugula salad, which is so Italian of me. 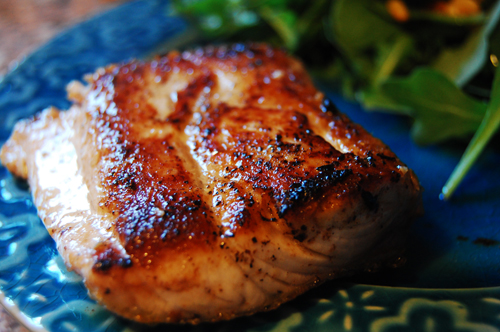 Rinse off your fish and pat dry.  Sprinkle the meat side with salt and pepper and squeeze lemon juice over.

In your pan, melt your butter.  Place skin side down and cook 8 minutes.  Flip and cook an additional 8 minutes.

Serve.  The fish should flake easily off the skin, you should not eat the skin. 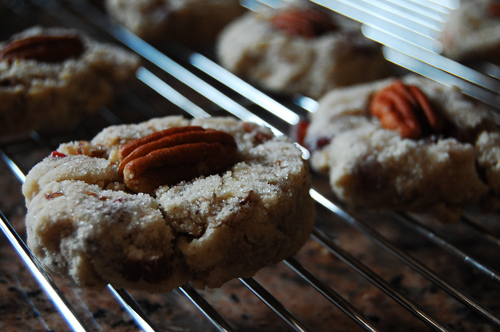 You hear about (and see on reality television) people that are addicted to food.  People that cannot, no matter what they do, stop themselves from eating everything and anything.  And then there are people that have “food weaknesses.”  For them, certain food items are addictive.  They can’t help themselves from eating an entire jar of peanut butter, a bag of chocolate chips, or all the pot-stickers in stock at Trader Joe’s.  Luckily, I suffer from neither of these conditions, but I think we can all identify with struggling to resist eating certain things in excess. 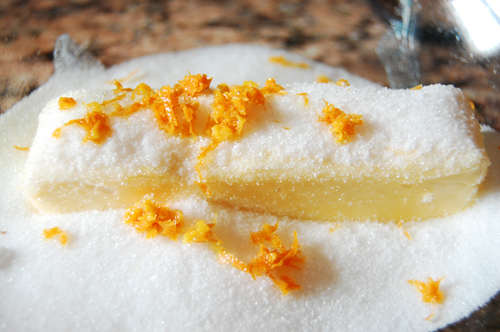 For me, there are a few things I have a hard time saying “no” to.  For one, gummy worms.  Also, white cheddar popcorn.  Tacos, chips and (good) salsa, chocolate covered raisins/cherries, and rolos.  I LOVE rolos.  Pecan sandies.  I’m not a huge fan of most cookies, I like them a specific way.  But these particular cookies I could eat hundreds of.  They have a great toasted pecan flavor, with hints of orange and almond.  Perfect anytime of the day… in moderation, of course. 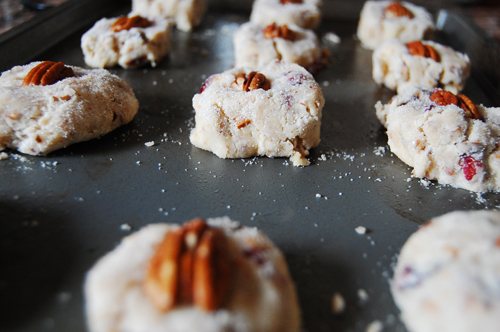 Whisk together flour, salt, pecans, and cranberries.  Set aside.

Roll the dough into a block and refrigerate 1 hour.  Slice into 1/4 inch cookies and lay on an ungreased baking sheet.  Press a whole pecan into each of the cookies.