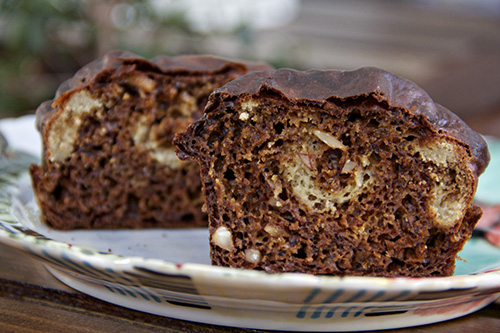 I am a firm believer that it’s important to hide your crazy early on in relationships. It would never have worked if I’d introduced myself to Dan by saying “Hi my name is Elena I’m a hypochondriac with giant hair who is also fairly certain that there are sharks in the deep end of every pool.” No, that’s crazy. Instead I just showed him my compass (not a metaphor) and let him figure the rest out over time, hopefully at the same rate that he discovered that I was awesome. The crazy to awesome ratio must be maintained at a steady rate for the early stages of any relationship (romantic or otherwise) as a way of not scaring potential friends away. And while some things are easier to figure out than others (like big hair), other quirks unfold at their own pace. For instance, it wasn’t until we moved in together that Dan realized I had a habit of keeping brown bananas in my freezer. 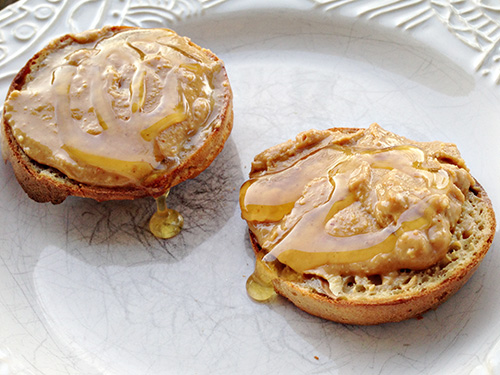 When I first started this blog I always had brown and black bananas in my freezer, the stray banana from a bunch that got too ripe to eat but could be saved for banana bread. And Dan thought that was insane. He couldn’t fathom why half our freezer needed to be filled with brown bananas, especially since my follow through was pretty terrible and I always put more bananas into the freezer than I took out for banana bread. Combine this with my penchant for savingwith soups and stews and stocks and our freezer became a black hole of squirreled away food. That I usually forgot about. I’ve long since stopped filling our freezer with bananas, and only partially because it drove Dan crazy. As I became more aware of the world around me (and my impact) my desire to eat a banana didn’t outweigh the environmental cost of getting them to my freezer door, so gradually our supply dwindled as I whipped up the final bunches of bread. Life moved onward, I filled our freezer door with other things that made Dan shake his head at me, and months or years would pass between each time I made banana bread. 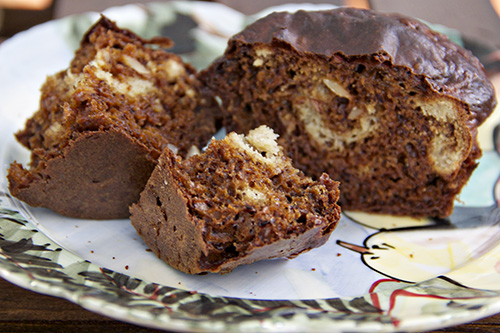 This week, however, I got sent home with a big bunch of brown bananas. They’d been forgotten about, left in a bag in the corner of a kitchen, and were in perfect condition for banana bread. I popped them right into the freezer and today I pulled out my banana bread recipe and got to it, thinking I’d have banana bread muffins for breakfast this week. When I looked at the recipe, however, a family recipe, I decided to make some tweaks to fit the way we choose to eat during the week. I substituted the two cups of sugar with 1/4 cup of honey, the buttermilk with Greek yogurt, cut down the amount of flour, used almonds instead of pecans (that’s what I had on hand), and added a few tablespoons of peanut butter. The end result was a perfect muffin to grab on my way to work– hearty, not too sweet, filling, and packed with whole foods that will keep me full all morning. They’re especially delicious split, toasted, and topped with nut butter and a drizzle of honey. 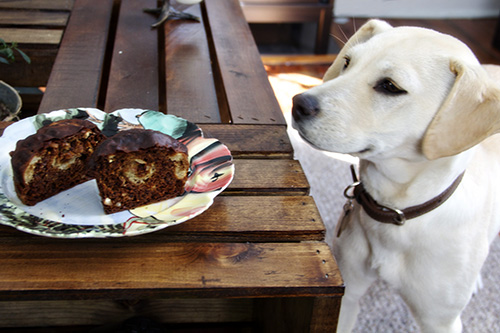 the risks of photographing in the living room

Peel and chop bananas. Combine in mixer with eggs, yogurt, honey, almonds, cinnamon, salt, peanut butter, baking soda, and water. Mix until completely combined, then add in flour, half a cup at a time. Heat oven to 400. Fill muffin tins (or bread pan) with batter and bake for 50-60 minutes, or until cooked through (check after 45 minutes). 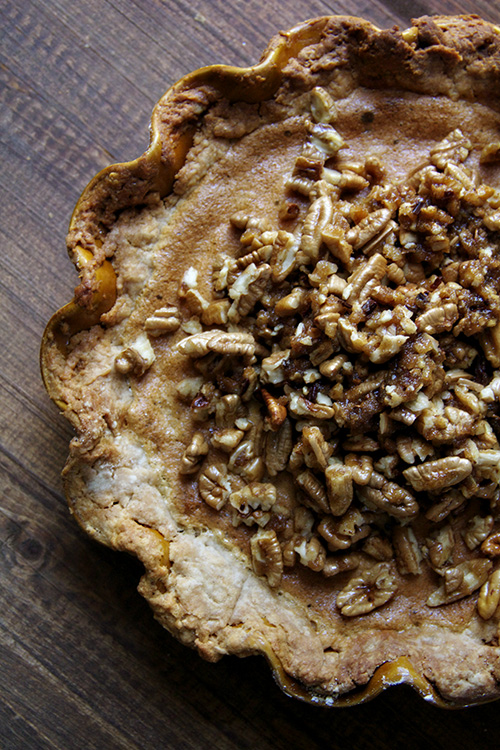 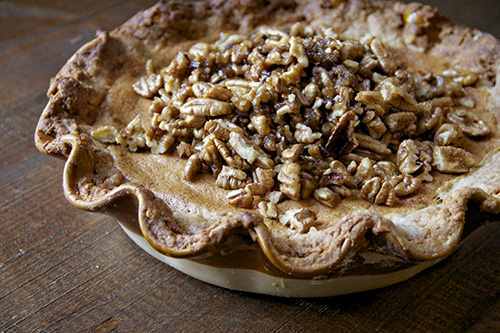 I’ve made no secret about the fact that chess pies are the greatest pies that exist. I mean sure, almost nothing beats a good apple pie and mountain pie is my special birthday treat, but as a category, chess pies rule. For one, they’re versatile. You can make anything from a Tarheel Pie to the Baltimore Bomb to a vinegar pie and they all fall into the same category. Like cousins in an incredibly tasty family. Secondly, they’re a dying art. Growing concern about sugar and fat consumption makes people vary wary of chess pies, meaning you don’t find them as often as you once could. To this I say- everything in moderation and long live the chess pie. 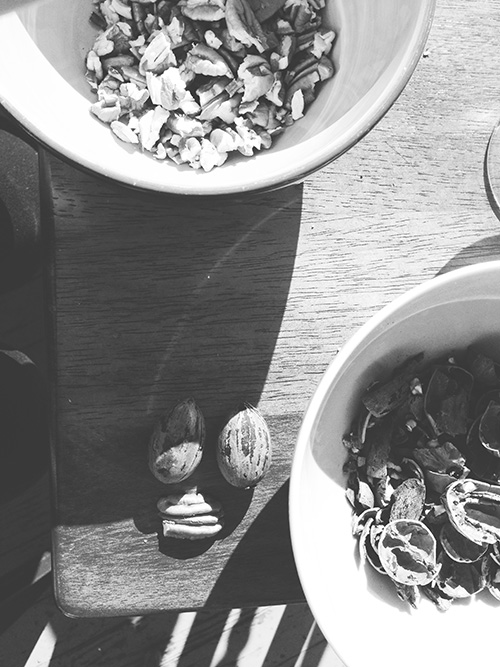 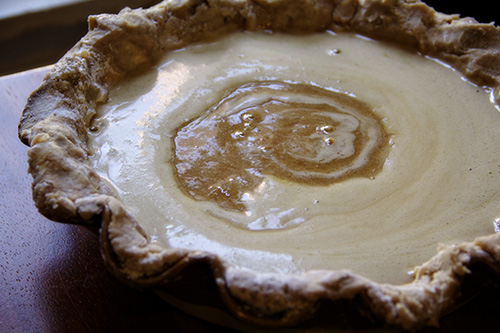 This month, as an homage to National Pie Month and National Sweet Potato Month, and as the Nash County installation of Tasting North Carolina, I’d like to share the recipe for sweet potato chess pie. A light and soft pie, this chess is a delicate variation of a traditional sweet potato pie. With only one cup of mashed sweet potatoes, as opposed to four to six in a classic sweet potato pie, it has all of the sweet potato flavor with none of the density. And lest you think “sweet potatoes are for Thanksgiving!” I’ll assure you that I had no problem gobbling up my (much more than a sliver) slice last night, late February date on the calendar and all. 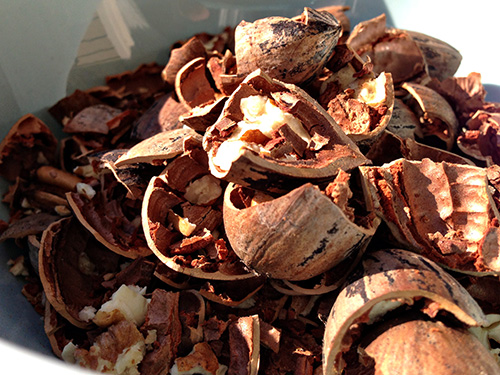 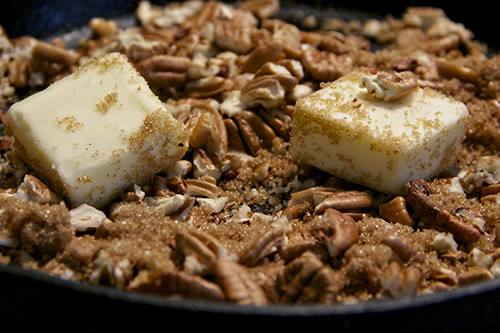 I topped the pie with freshly shelled pecans that had been caramelized with butter, brown sugar, and spices. I’ll admit, the pecans on top and the cinnamon in the crust put this pie over the edge, from “pretty delicious” to “holy sugar high I’m going to eat this whole thing in one sitting.” I’m currently playing the “if I have just a sliver it doesn’t count” game, which, when you have about 100 “just a slivers,” quickly becomes girl you just ate a whole pie. Which is all to say, make this for company. 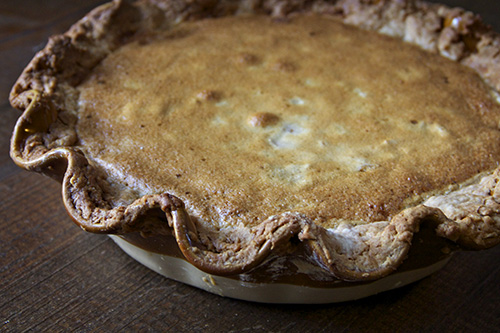 I chose this pie as the recipe representing Nash county, which is located in the Northeastern part of the piedmont between Franklin, Wake, Edgecombe, and Wilson, because Nash county is the largest producer of sweet potatoes in North Carolina, and North Carolina is the largest sweet potato producing state in the country (and has been since the 1970s), accounting for 50% of the country’s sweet potatoes. So, if you decide to make this pie, chances are good you’re enjoying a NC sweet potato, probably even a Nash County gem. Nash County is named for the American Revolutionary War Brigadier General Francis Nash, who was mortally wounded at the Battle of Germantown in 1777, the year Nash County was formed. Of Nash county’s many townships, I have the most personal connection to Rocky Mount, where a fair amount of Rosemond-side relatives reside. My most vibrant memory of Rocky Mount was a childhood Christmas visit where my brother Reid (maybe aged 5 or 6 at the time) recited the infamous Home Alone line “Merry Christmas, you filthy animal” to my Great Aunt Francis. She did not get the reference and my family still jokes about that moment and the horrified look on her face. Reid has always been good with impressions.

I wanted to take a moment to thank all of you for the generous outpouring of support and interest in Tasting North Carolina. Since I launched the project a few weeks ago I’ve received countless emails, phone calls, and letters about recipes from all over the state and inquiries about how this community can get involved. I am psyched to make all of these delicious foods and I thank you for trusting me with your stories and your recipes. One thing is overwhelmingly clear- North Carolinians love this place and we’re fiercely proud of our food culture. Thank you. I’m prouder than ever to call myself a North Carolinian. 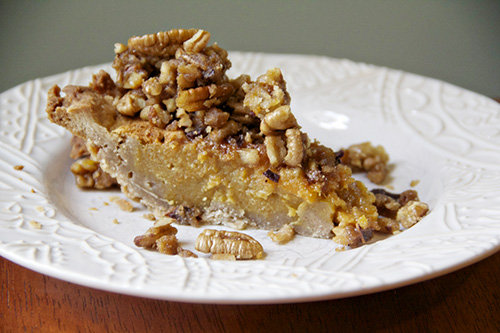 This post is part of the ongoing series, Tasting North Carolina. Read more about the project here.

1 cup mashed sweet potato (this was about 1/2 a medium size sweet potato. Either get a small sweet potato or do as I did and feed the other half to your pup)

Start with your pie dough, about 2 hours before you plan on making your pie. Stir together sugar, flour, and cinnamon. Work in shortening with your hands. Cube butter and work that in until the consistency is like cornmeal or sand. Stir in water until a ball forms, then wrap the ball in plastic wrap and refrigerate for at least an hour.

Peel and boil your sweet potatoes until soft. Combine in a mixer with remaining ingredients and blend until smooth and fluffy.

Heat your oven to 350 and press your pie dough into your pie pan. Pour in filling and bake for 40 minutes or until the top has browned. Let cool until solid.

Combine pecans, butter, and sugar in a skillet and cook over low heat until caramelized. Slather on top of the pie and give it all about an hour to settle. This pie is best served at room temperature. 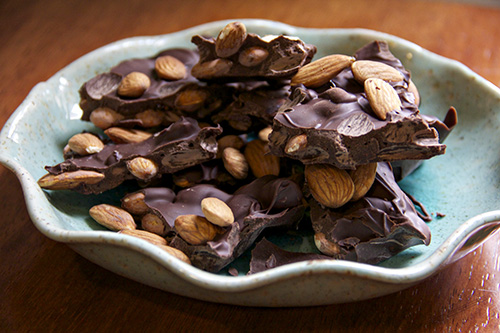 So as some of you may know, and may care, I am training for the Wrightsville Beach marathon this March. Since I’m basically just extending my training from the 21 mile trail race I did in January, I’m trying to spend this time fine tuning my method and packing in a lot of cross training like yoga and biking to make sure that I’m as strong as possible when I cross the starting line St. Patrick’s Day. Part of the fine tuning has been finding the right foods to fuel my runs. Over the summer my body had a terrible time adjusting to running in the heat and I fought a lot of nausea, which lead me to energy chews and sodium tablets for my hydration pack. I also incorporated a lot of granola bars, nuts, and pretzels into my long runs. 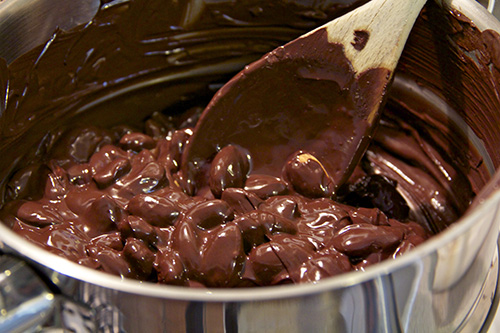 Recently I started bringing dark chocolate covered almonds with me on runs to great success. They serve the same purpose as gus or energy chews and they’re a lot more delicious. Not to mention better for me. Instead of a medley of chemicals, salt, flavoring, and gelatin I know what I’m munching on is a whole food with a good balance of fats, calories, and sugar to give me a boost of energy in the short term and fuel for the long haul. 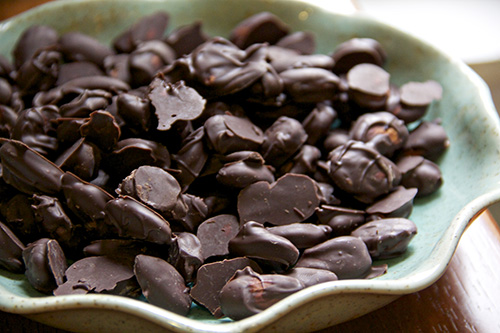 Wanting to ever simplify (and being frugal) I made a batch this week. And when I got lazy and tired of picking the almonds out of the melted chocolate I scooped the rest of the mix into a lined baking pan and made almond bark. Perfect for runs, for afternoon snacks, or as a night time treat. 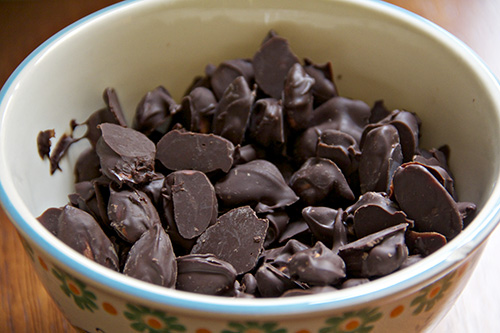 In a double boiler melt chocolate, stirring occasionally until smooth. Pour almonds in and stir to cover. Line a rack with wax paper and place almonds, separated by a 1/4″ or so, there for a few hours or overnight to dry. To make almond park line a baking sheet with wax paper and pour in, 1/2″ thick. Cover with a handful of raw almonds and let sit to harden.