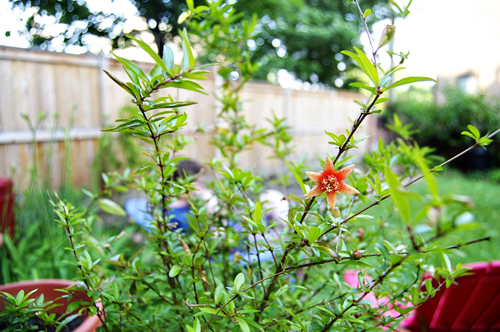 We have big plans this summer. Big garden plans.  Big vegetable garden plans.  Last year we grew our first outdoor vegetable garden and while it was wonderful it was not nearly as ambitious as we wanted.  This year is completely different.  We have twice the space, ten times the variety, and big dreams.  I thought that because what we cook, eat, and write about this summer (and hopefully this year as we use food we’ve preserved) will be coming from this garden, it would be fun to occasionally give you a look into how things are growing. 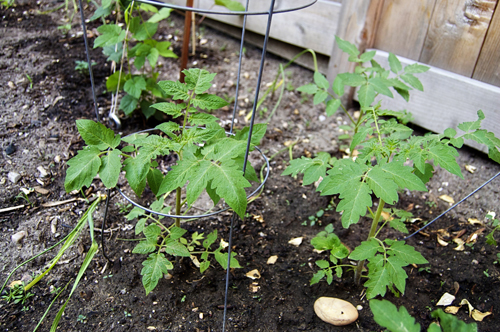 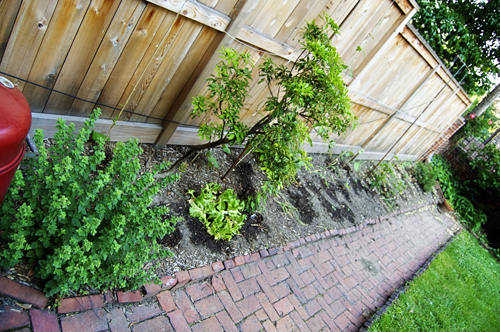 The biggest perk (and selling point) of our sometimes painfully small urban apartment is that we have a backyard.  And because we live in the garden apartment, we consider this little corner of Baltimore to be the best part of our home (side note: we’ve declared it an embassy of North Carolina).  Last year in the little plot we grew pink ponderosa and beefsteak tomatoes, TWO incredibly fruitful habanero plants, cajun jewel okra, eggplant, royal burgandy beans, hot and spicy oregano, basil, rosemary, thyme, and a dwarf pomegranate tree.  In the fall we planted spinach, arugula, and garlic.  We had a lot of problems last year.  It was so hot that most of the plants wouldn’t set fruit until early fall, some plants (cough, habanero, cough) way overproduced while others (like okra) put out only one fruit at a time.  It was amazing to eat from our own backyard all summer but we learned a lot. 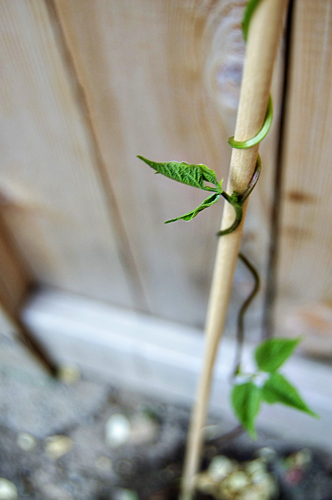 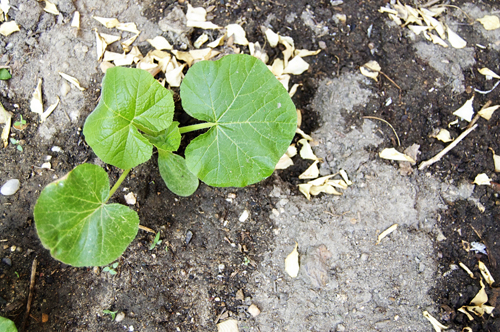 One of the biggest lessons we took away from last summer was that it didn’t make sense to divide our limited growing space between all the tenets in our building.  We live in a 19th century rowhouse in a historic neighborhood, which is split into a number of apartments.  We’re lucky in that our housemates are wonderful people.  And last summer a few of us had backyard plots and all grew the same thing.  Which meant that we had a lot of tomatoes and habaneros.  So this year we’ve decided to garden together. Maximizing the space we’re growing a huge variety that will keep us all in the vegetable way. 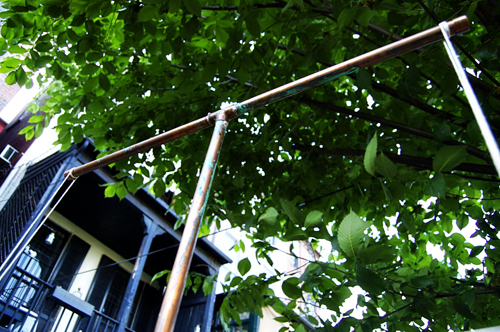 Dan’s creation, something for his hops to climb 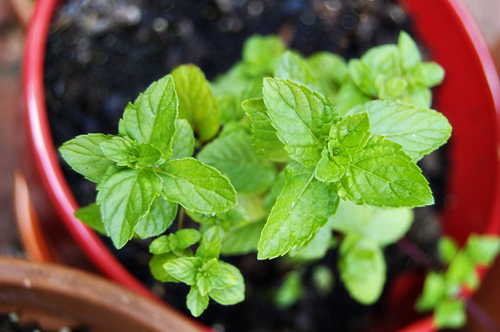 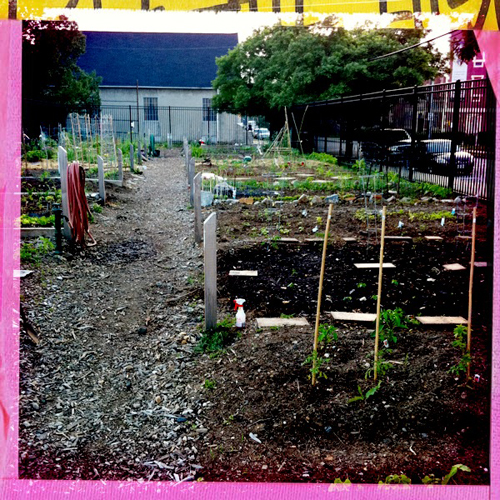 This summer is also our first in a community garden.  We were lucky enough to get a (huge) plot in Baltimore’s Roosevelt Park Garden.  It’s about two miles north of our house, which I learned today is a lovely (if not a bit hilly) bike ride that smells perfectly like honeysuckle.  At this garden we’ve planted a variety of tomatoes, okra, squash, melons, cucumbers, and peppers. 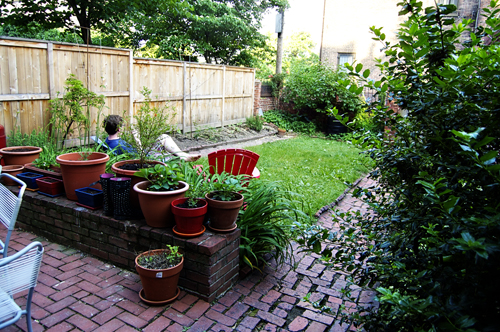 For now, we’re thrilled.  But this Saturday is Baltimore’s Herb Festival, so I have a feeling we’ll be making some additions.  What are you growing this summer? 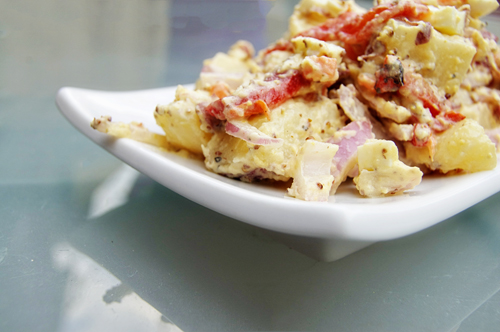 This week I’m excited to share my Aunt Paula’s potato salad.  I love potato salad, especially the grilled potato salad we made last summer (I can’t wait to make that again).  As the weather warms up I’m thinking about picnics more and more, and no picnic is complete without a potato salad! 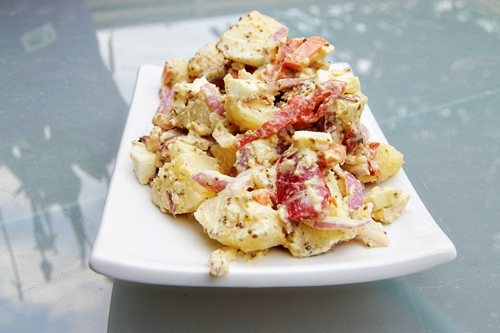 When our son Matthew was seven and had developed into a strong swimmer my husband Richard and I thought it was time to include him in one of our favorite outdoor activities- kayaking.  As he was too young to kayak on his own we bought a two-person kayak so one of us could help steer and paddle.  He quickly caught on and kayaking has become a fun family event that’s enjoyed from Spring to Fall.

We’ve begun an annual tradition of kicking off the summer season by going to one of our local lakes, either Mercer County Park or Assunpink Nature Preserve.   We spend most of the day paddling around, exploring the local wildlife, watching fishermen and other boating enthusiasts and then pulling over for a family picnic.  The picnic is never fancy, but it’s something we look forward to.  We search the bank for a good spot, one with a clearing, and pull the kayaks over.  We eat our lunch and talk about what we’ve seen that day.  Matt sometimes wades into the water or skims rocks on the surface.  All in all, it’s a great way to start the summer. 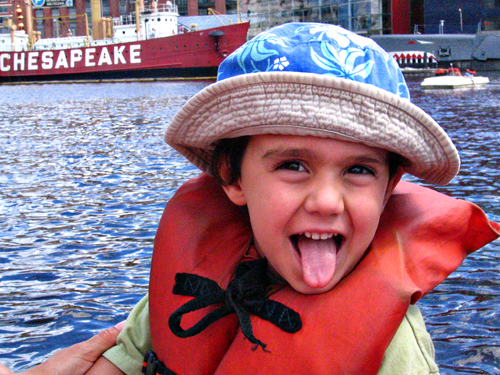 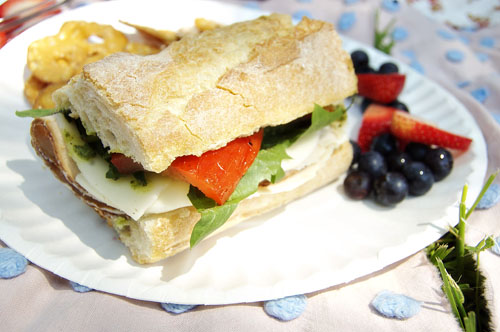 For picnics, my mother always makes hoagies.  The sandwiches vary, but usually it is turkey, provolone, greens, pesto, and some sort of roasted pepper or onion.  These simple sandwiches were always fresh and delicious, paired with chips or fruit salad, soda and maybe even dessert.  Over the years we’ve eaten these sandwiches up and down the east coast and still they’re my favorite picnic treat, a testament to my mother’s sandwich making skills. 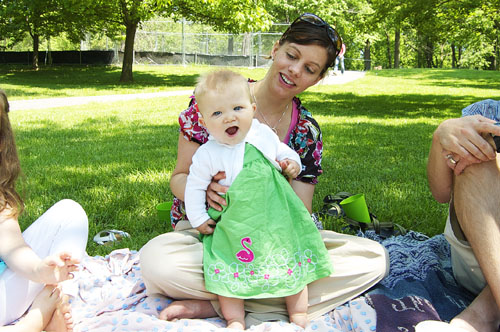 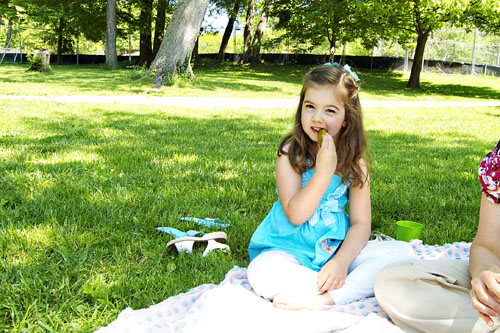 This mother’s day we met the Turcottes at the Wheaton Regional Park for a special picnic.  We ate sandwiches, pretzels, pickles, fruit, and whoopie pies and enjoyed what turned out to be a gorgeous day.  We took turns making Amelie smile and planned for when Meredith is old enough to read Harry Potter and make the trip to Orlando with her favorite Aunt and Uncle to GO TO HOGWARTS (Meredith has no idea what she’s in for). 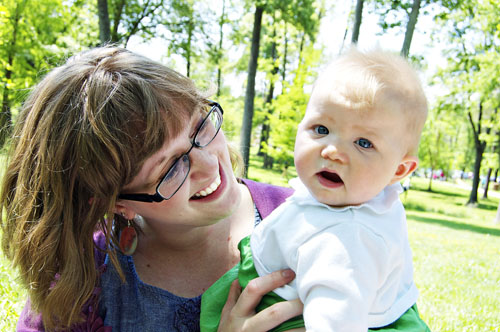 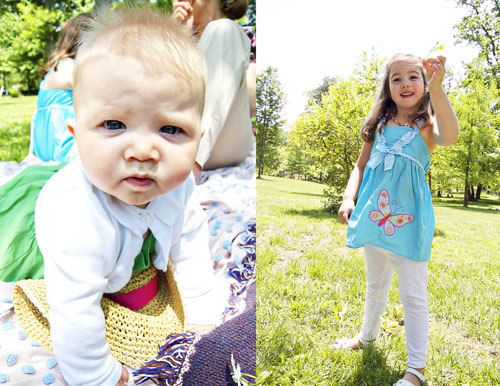 Dan and I aren’t quite anywhere near ready to have kids (sorry Paps!) of our own so these days we rely on our sweet, wonderful nieces and a group of pretty amazing family friends to keep the little ones in our lives.  It was lovely spending mother’s day with the Turcottes, I feel so lucky to have them in my  life. 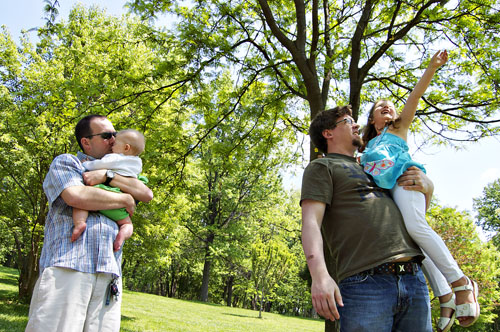 Loaf of French or Italian Bread

Combine all ingredients but roasted red peppers on bread.  Wrap sandwiches in parchment and pack with peppers in picnic basket.  Add peppers when you are ready to eat.