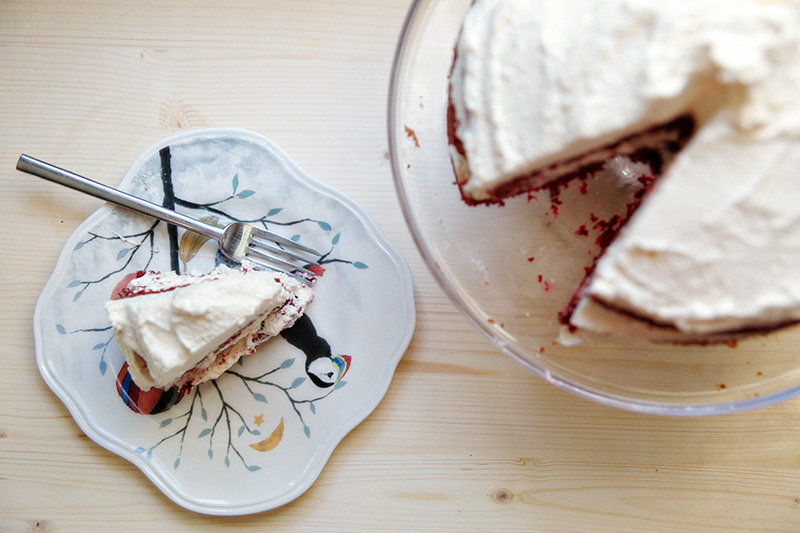 First and foremost, thank you. Thank you for your comments, your emails, your sweet words, and your love. I’m really glad to be out in the open with both the celiacs and the pregnancy, and it means so much to me that I’ve been able to share this whole journey. I also really appreciate the enthusiasm you guys have shown this past week for what me having celiacs means for this space, so that’s a conversation that we can start having now! And that will probably never end! Because my relationship with food is ever evolving, and as long as you guys are along for the ride, I’m happy to share. 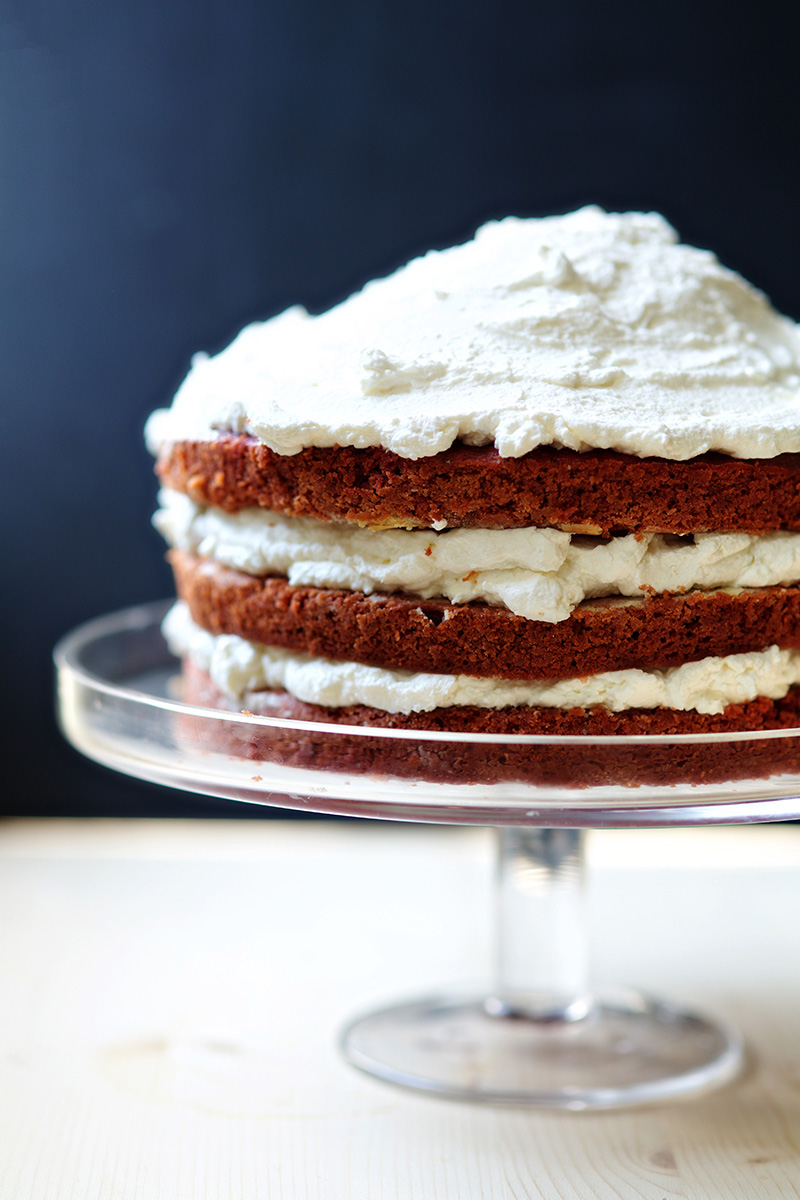 So I should probably preface this all by saying that this is not a gluten free cake. I haven’t tried to make a gluten free cake yet, but I’ve had some success with biscuits, rolls, and even cinnamon rolls (yup, these were gluten free), so I’ll keep you posted on my experiments. This red velvet cake is, however, made with beets! And, even better, it doesn’t taste like beets! It just tastes like super delicious, incredibly moist cake covered in whipped cream. Which is frankly a cake even I can get behind. 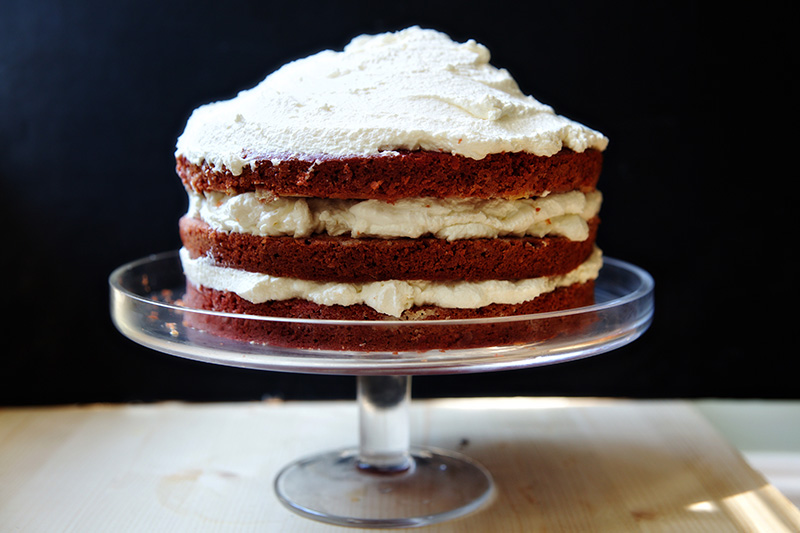 this recipe is my creation and originally appeared in Our State

Peel and chop beets. In a food processor or blender, combine beets and oil. Blend until completely smooth.

Preheat oven to 350º.  Oil and lightly flour three 9-1/2-inch round cake pans. Pour cake batter evenly between three cake pans. Bake for 30 minutes or until cooked all the way through, rotating halfway. Transfer to racks and let cool completely.

To make the frosting, combine all ingredients in a stand mixer. Beat until stiff. 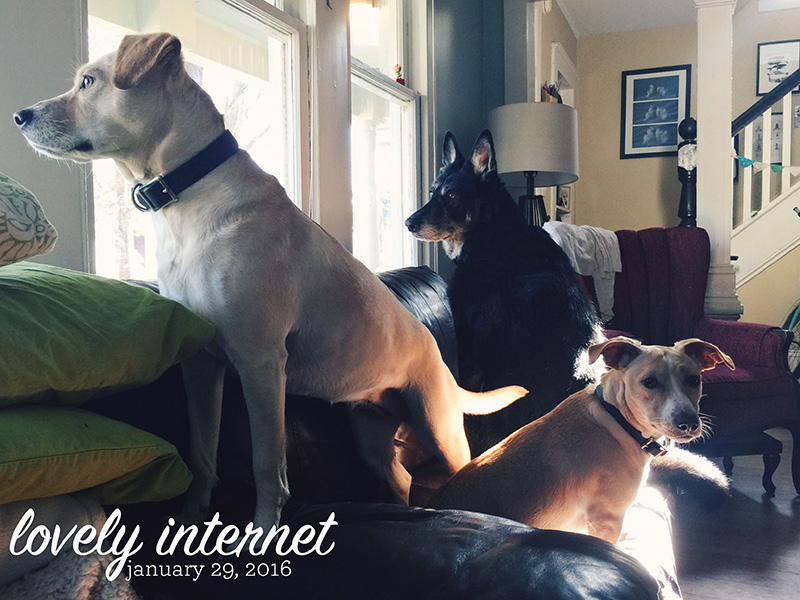 1. And Congress is just workin’ the balls.

3. This kid is amazing. I want to raise my children reading that library.

4. The burden of living in the public eye.

5. Hell of a vacation video.

6. I’ll stick with ye olde smell test (especially now that my sense of smell is hound-like).

7. If we talked about white riots the way we talk about black riots in the media.

8. The real problem with Trump vs Kelly. (also, for laughs)

10. This is one of my favorite smells. 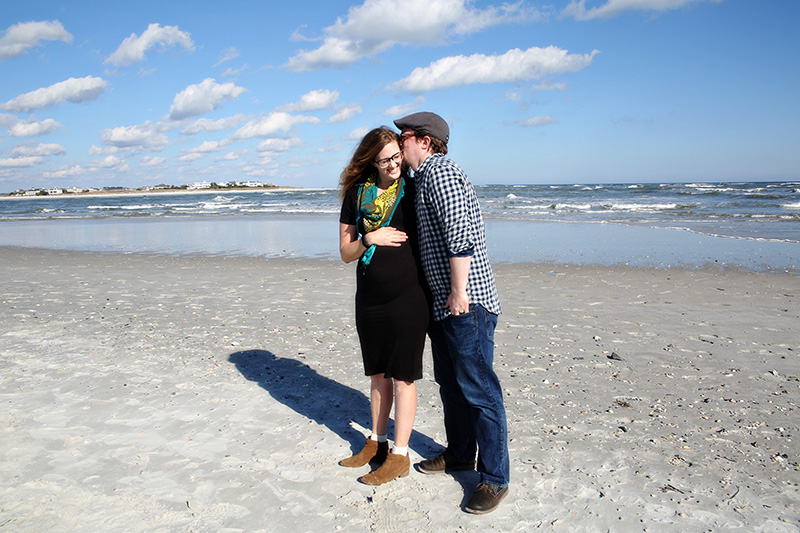 A Bushel of News

Back in the fall my Grammy asked me if we had thought about having kids. This in and of itself shows incredible restraint, in the six years that we’ve been married that was the first time she ever brought it up (bless her). I mentioned that we’d been trying, that we were up for it, and that we were hoping it would happen soon. Her response? She said she would put that on her prayer list, but only if I was really sure that we were ready. She stressed the fact that she didn’t want us to end up with a baby too soon. Because thus is the power of Marlene’s prayer. 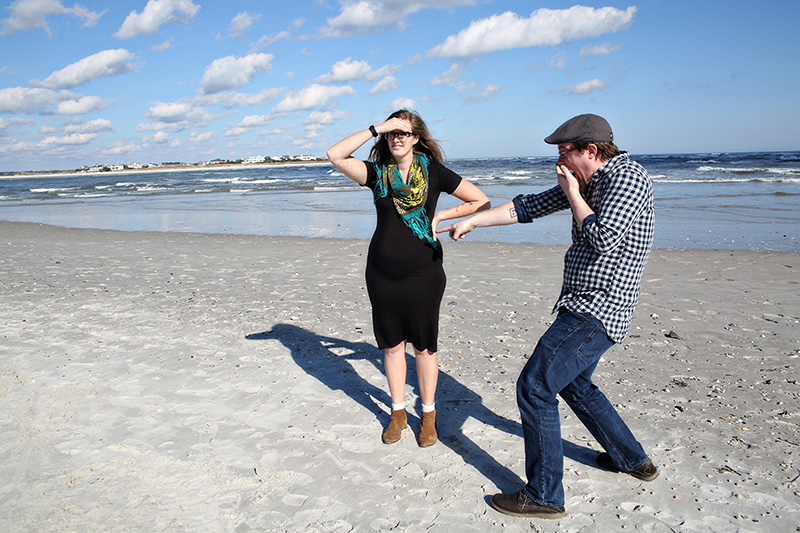 This whole conversation happened because we were discussing my health at large, and a whole mess of bloodwork that I had done to get to the bottom of a years-long battle with infertility. After a lot of blood was forcibly removed from my body to be analyzed by my ever capable and thorough naturopath we found an answer. I have celiacs disease, which is an auto-immune disease caused by the body’s reaction to gluten. Since gluten is found in wheat, barley, rye, spelt, and all their derivatives, my diet has changed pretty dramatically. For those putting two and two together, biscuits definitely have gluten in them. That’s been an adjustment. 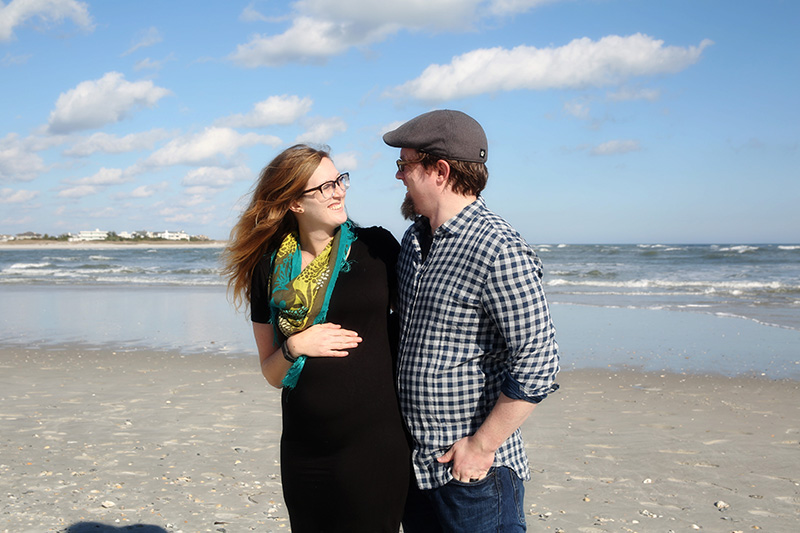 The giant silver lining of the whole celiac situation is that (very) shortly after I completely eliminated it from my diet, I found out I was pregnant. After three long years of having no earthly idea what was going on in my body, this giant piece of the puzzle gave us the answer we’d been hoping for. I’ve spent the past few months alternating between bliss and terror (and vomiting. There has been much vomiting). I’m due in early July, which means that it looks like I’m getting a sweet little birthday baby. We’re pretty stoked. Also, Grammy’s prayers are potent. Be careful what you wish for, family. 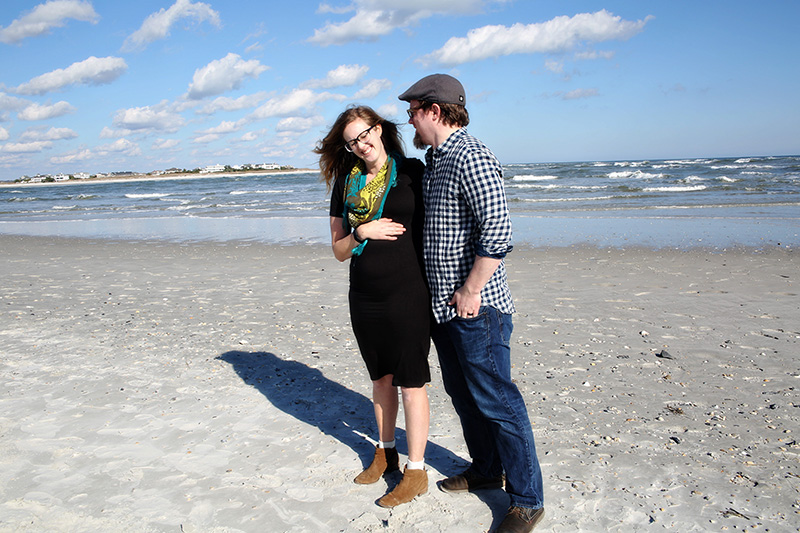 So let’s tackle what this all means. When I found out about the celiac and told a few friends and family, they all immediately went OH NO BUT WHAT ABOUT BISCUITS?! Half of everyone has asked if I’m going to become a gluten free blogger (no), what this means for the biscuit book (it’s still on), and if I’d realized I can’t drink beer anymore (yes, I do realize. Also, bagels). I’ve spent the past few months adapting slowly, and I’m happy to say I’ve come up with a kick ass gluten free biscuit recipe. I don’t anticipate this space becoming gluten free, because I still make food with gluten in it and feed all the people in my life who don’t have celiac. Also, what I’m interested in is Southern food culture, so I’ll continue to examine that. And occasionally feel sorry for myself about the bagels and the beer. 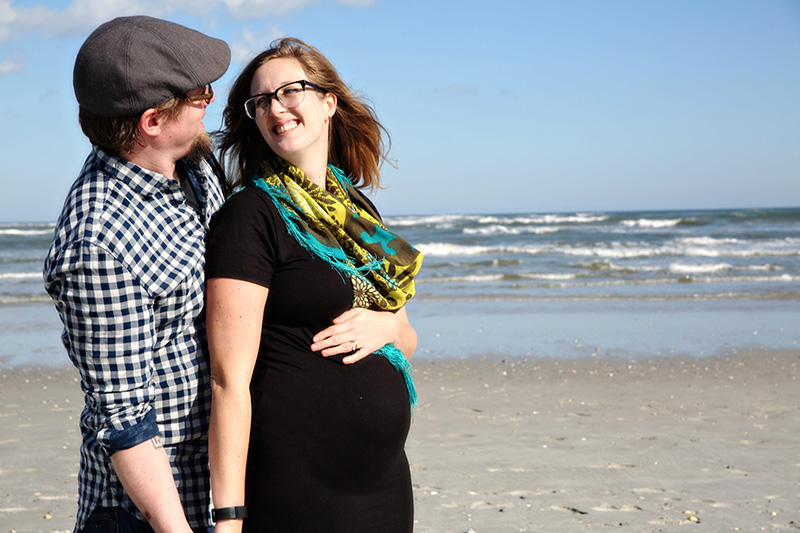 You may have noticed that things have seemed a little bit slow in this space for a while. To be totally honest, I careened head first from one major life change into another. By the time I was rebounding from the celiac and finding some normality, the first trimester set in at full force. Gearing up for and pulling off both our annual Fauxgiving and real Thanksgiving was a feat, and if I’m being totally honest we’ve eaten more take out and easy one-skillet meals than anything else lately. Sometimes I would get halfway through preparing a post and the pictures of food would make me sick. The kitchen and I have not been spending too much time together, and blogging about food has been a bigger challenge than I anticipated. Thankfully, however, things have eased up now that I’m in the second trimester, and my body is, while ravenously hungry, agreeing to let me back in the kitchen. So, fingers crossed, things will return to some semblance of normal (at least until July). 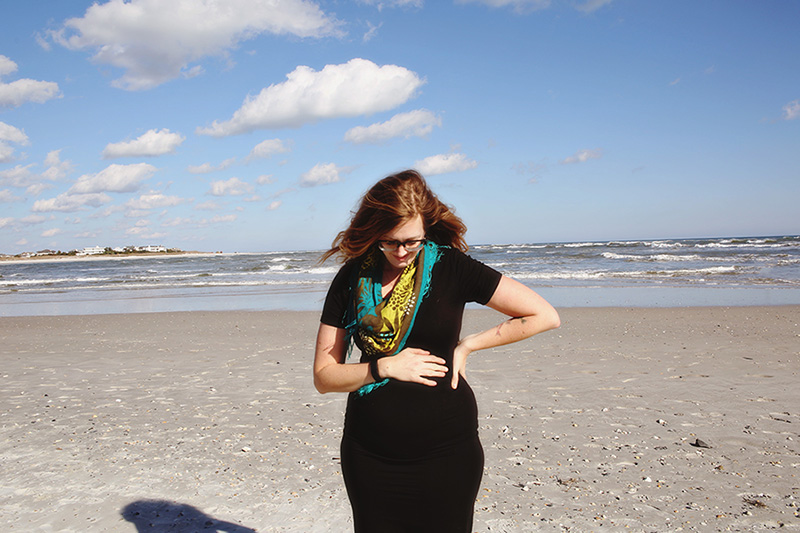 To say that we’re excited would be the understatement of the century. We are totally and completely blissed out, and can’t believe we’re finally here. Seeing that little baby wiggle around on the ultrasound screen for the first time just before Christmas was life changing, and even though there’s a lot of poop and sleepless nights in store for us this year, we’re pretty sure 2016 is going to go down as one of the Rosemond-Hoerr best.

(a very very special thanks to my friend Christina for taking these photos).